A Multisensory interface for museum accessibility

APTICA is the prototype for a multisensory tactile interface that was created as part of the Over the View project undertaken by Centro di Ricerca, Sviluppo e Studi Superiori in Sardegna (CRS4) with the aim of providing companies and institutions with tools to deepen their knowledge of accessible museum exhibitions in a universal design perspective.

From the functional point of view, the device had to be designed primarily, but not exclusively, for a tactile experience with the aim of making pictorial works of art accessible. The complex two-dimensional imagery had to be synthesised into small-scale three-dimensional objects suitable for tactile exploration and equipped with integrated touch-sensitive surfaces. The user would then have to explore the 3D figures with his hands, sending signals to the hardware and software system integrated in the internal technical compartment, activating the reproduction of the audio and video contents related to the figure touched. By strategically combining touch, hearing and sight, with the support of an integrated 10.1″ monitor and stereo speakers, the aim was to satisfy the widest possible range of needs.

Starting from this brief, our work unfolded into two complementary areas. The first had as its objective the design of the physical interface that was to host the scaled and sensorized reproductions of the works of art. The focus of the second was instead the research and development of an autonomous and computational process to generate a tactile pattern that could fill a given boundary of complex geometry as a single continuous path with two electrical connections at its ends.

THE PHYSICAL INTERFACE: AN AUGMENTED POINT OF VIEW

Beyond the utilitarian aspects, undoubtedly especially relevant for this project, the brief immediately showed a potential to open a new chapter within the philosophical, historical and semiological discussions about the frame, an object that to date has assumed the status of theoretical object. The frame appeared in a context that understood art as a reality detached from the one in which we live. It was a boundary between the field of representation and real space whose aim was to intensify the perception of the depth of the field or to project movement outwards. The historical evolution of its role went through different phases until its negation. However, all discussions were based on a visual fruition of the works of art. Precisely this consideration and the initial brief suggested to us the necessity and the possibility of a new role for the frame, since for the blind person, the frame as a visual margin loses its value strictly linked to the materiality of the geometric sign surrounding the artwork. So we came across a new question:

Can we imagine a new type of frame that fosters alternative cognitive processes to facilitate artworks fruition by blind people?

We therefore worked to define a new configuration of the frame, both material and sensorial, that could express the growing awareness of the need to minimize the impact of disability also with regard to the accessibility of the paintings and offer a contribution to the achievement of this objective.

APTICA thus aims to be an expression of the transition of the frame from a margin for vision to an intensifier for the senses.

DESIGNING FOR THE SENSES ACROSS COMPUTATIONAL DESIGN AND DIGITAL FABRICATION

Complex tactile experience need people to be trained and prepared; one need a tactile strategy to see objects with the hands. As well as sniffing coffee beans prepares the sense of smell to better perceive odours,

APTICA is designed to prepare the hands for the tactile experience. It is an autonomous, tabletop artefact, part of its body floats over the supporting surface with the aim of isolating it from the surrounding world and stimulate the perception of a suspended object on which to concentrate one’s senses. The first element with which the user comes into contact is the perimeter of the frame: a fragmented body consisting of a sequence of blades, these are all different and oriented like rays towards the center of the subject. The fragmentation aims to provide a first tactile transition from the surrounding solid objects to the sensory space delimited by APTICA.

Then the hands meet a second element, the skin: an extremely smooth membrane that surrounds the tactile subject’s board. The skin is intended to reset previously tactile perceptions stored. This is a neutral transition zone to resets one’s senses. The concave shape of the skin then pushes the hands towards its deepest part suggesting a tactile immersion in the sensory space of the 3D tactile miniature. To obtain a smooth and sturdy surface, the skin is made of glass fiber moulded over a mold made by robotic milling.

Finally, at the center of the membrane there is a docking surface to accommodate the interchangeable tactile boards. Thanks to a series of surface electrical connections and an RFID card, the boards are automatically recognized by the system to enable the respective audio and video descriptions. Each board features a scale marker and a direction marker. These are made ad hoc for the single subject through stereolithographic 3D printing and are critical to guide the tactile experience. On the front, closest to the user, the skin houses an activation touch panel with integrated microphone for vocal the interaction with APTICA brain developed and programmed by Overt the View research team at CRS4.

The first two functional prototypes have been self-produced inside our laboratory for digital fabrication strategically combining multiple techniques from robotic milling, to laser cutting and 3D printing.

For the design of the tactile surfaces, the figures represented in the paintings are simplified and transformed into three-dimensional elements characterized by different heights with respect to the plane of the background so as to make the planes of depth of the work perceptible and provide a reading of the three-dimensional space. The upper surfaces of each figure are then processed as tactile surfaces, the Touch Feelers, able to detect the touch of the person and enable audio and video descriptions of multimedia content prepared in the integrated PC so as to illustrate, figure by figure, the contents of the work and guide its use. The design-research work for the development of tactile surfaces has required the creation of advanced computational design procedures to meet the following needs:

Approaching the project form a systemic point of view, we found that the tactile surface had to consist of a continuous conductive trace covering the entire surface of the figure with a non-directional pattern to avoid confusing the perception of the figures.

At the ALO Co.Re + D (Computational Research + Design) unit, we followed a “bottom-up” approach, focusing our design-research on the conception of a computational method to generate a pattern of occupation of the figures consisting of a single curve able to fill any geometric figure, both compact and non-compact. Within this study, several strategies have been explored, however, in the case of non-compact figures, many failed to produce a single occupancy curve. This was critical to avoid too intricate wiring and too many electrical connections. However, we finally identified a computational process that starting from a certain edge condition (the figure) and a set of genotypic parameters and constraints calculates the occupation of the figure with a single complex curve. This folds on itself as a ribbon until filling all available space. The complex vector figure generated becomes the basis for the construction of the conductive tracks of the touch feeler.

Thanks to this procedure that combines computational methods of physical computing and parametric-associative design strategies we have obtained a generative system that occupies the space always respecting the constraints of production and operation of the surface itself.

The tactile surfaces and the production procedure have been finally prototyped in our laboratory for digital fabrication developing a reliable cycle that combines painting, laser cutting and laser engraving to achieve a homogeneous, repeatable and precise result. 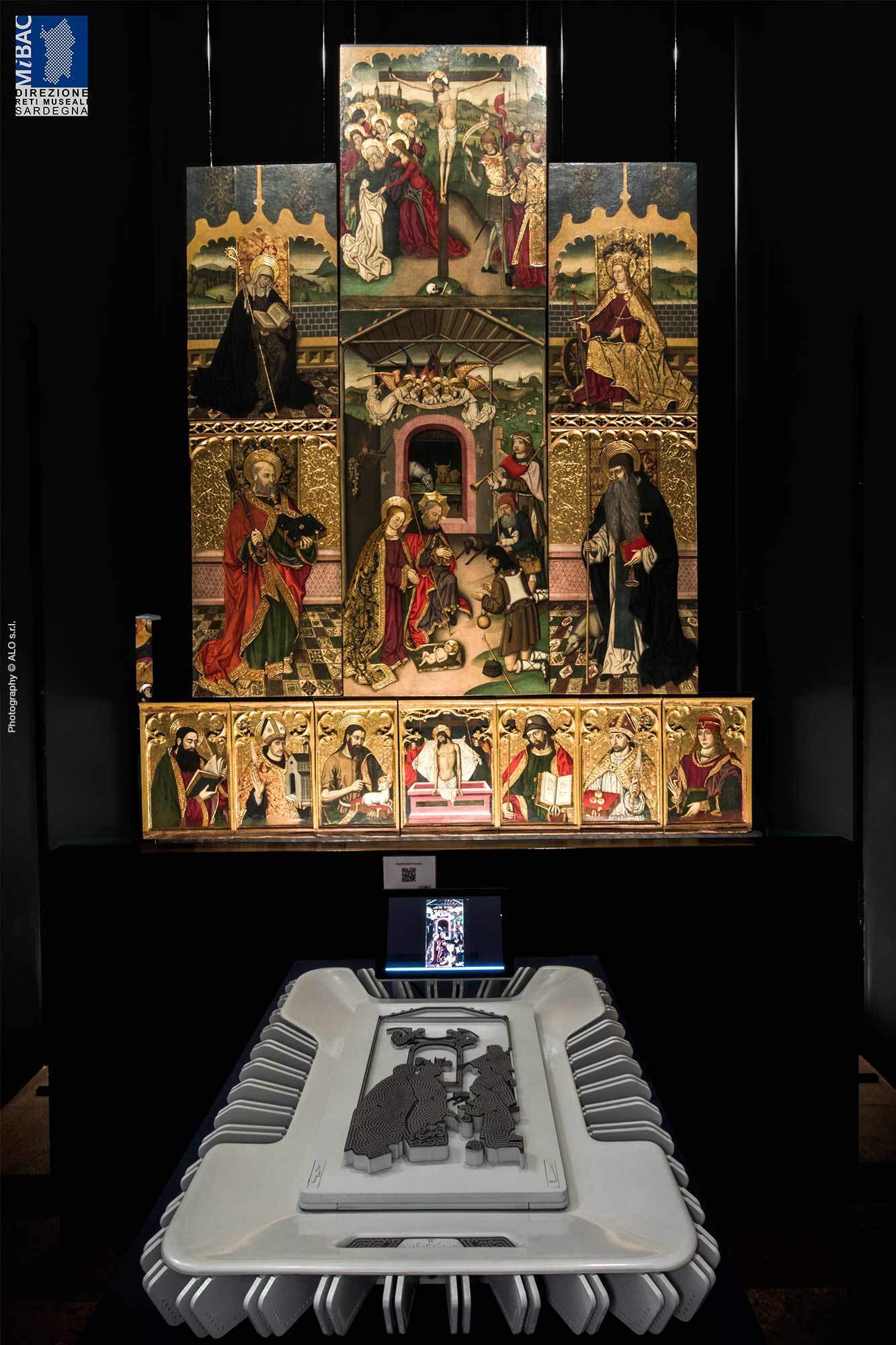 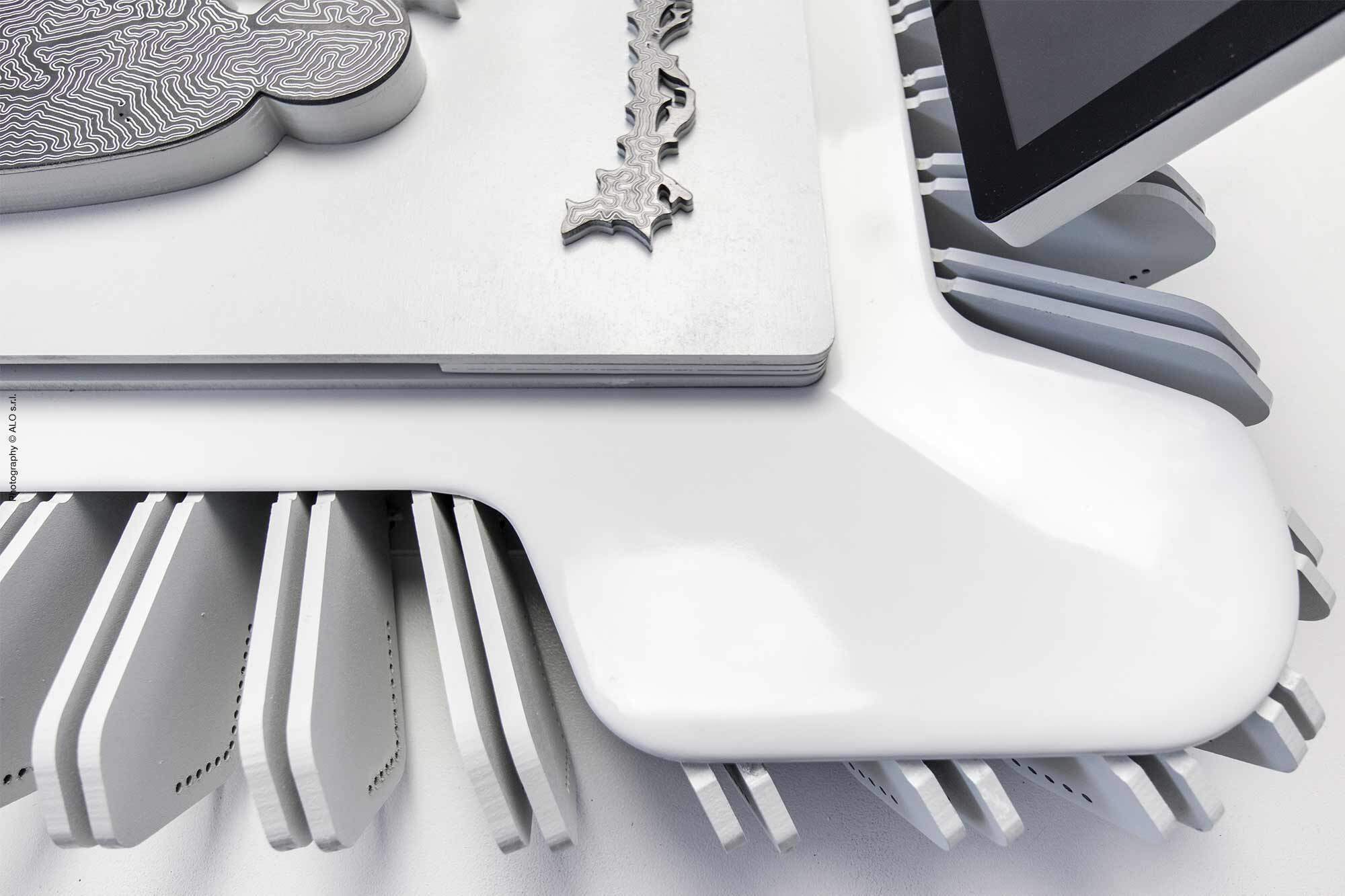 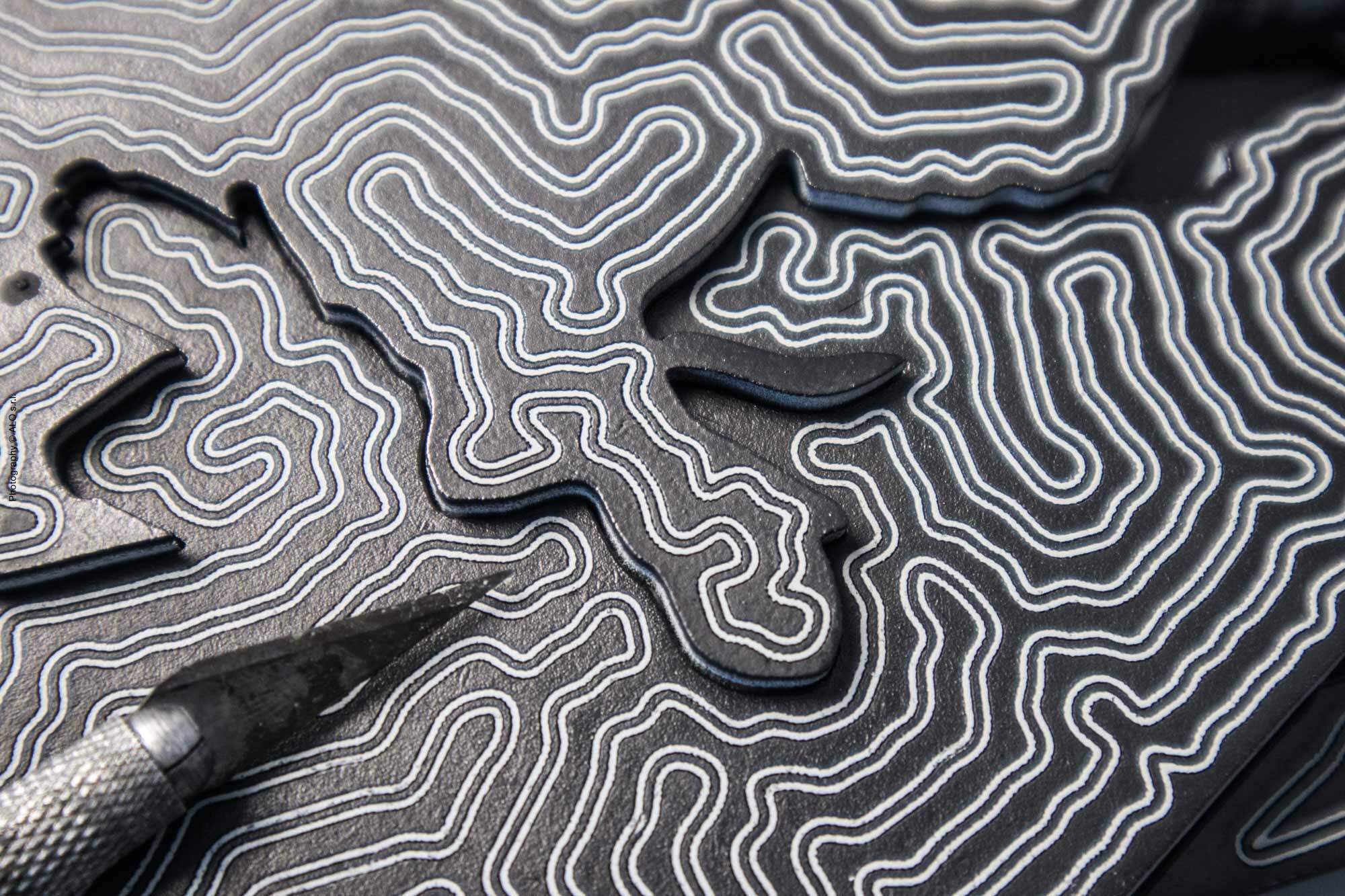 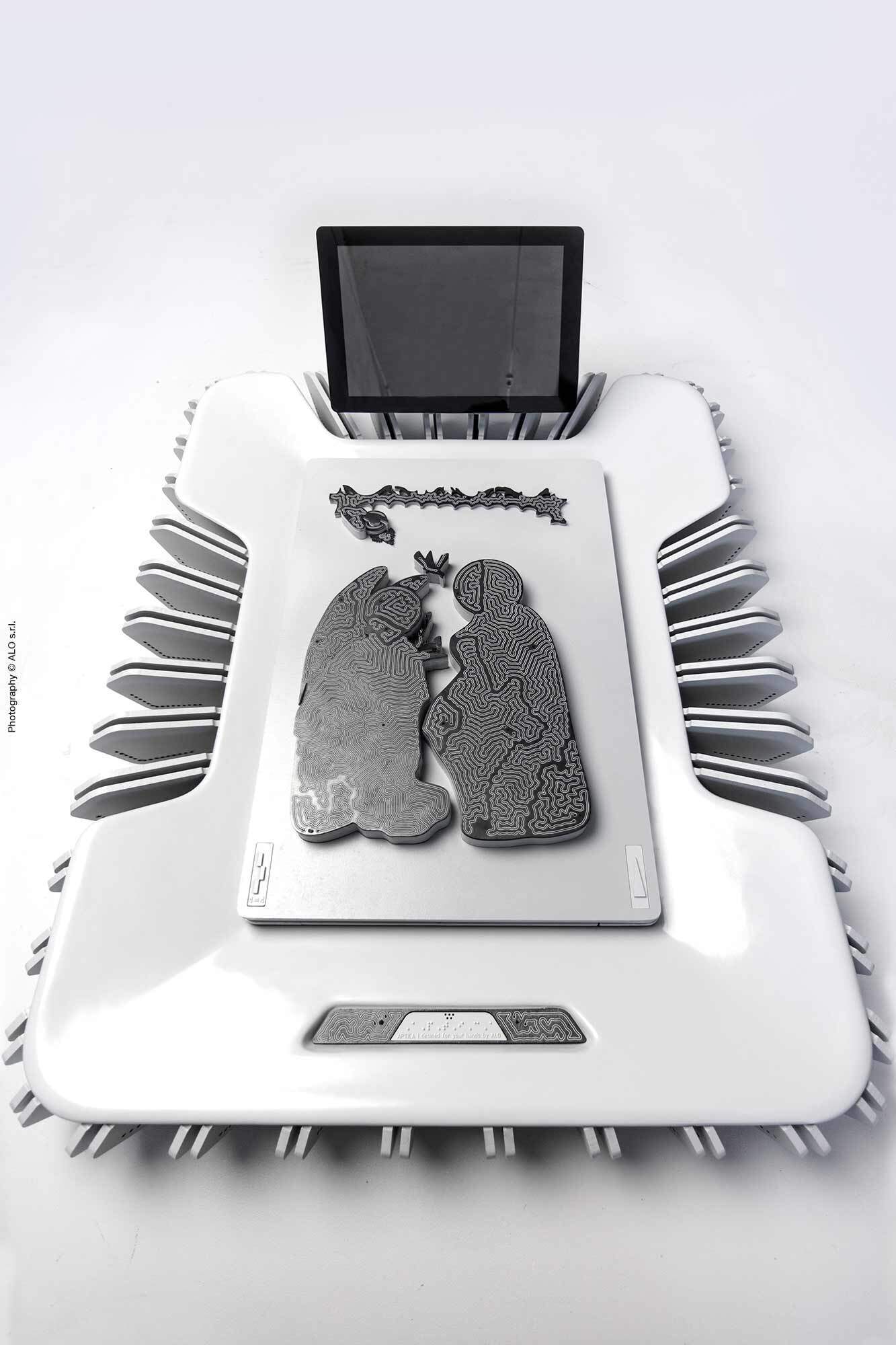 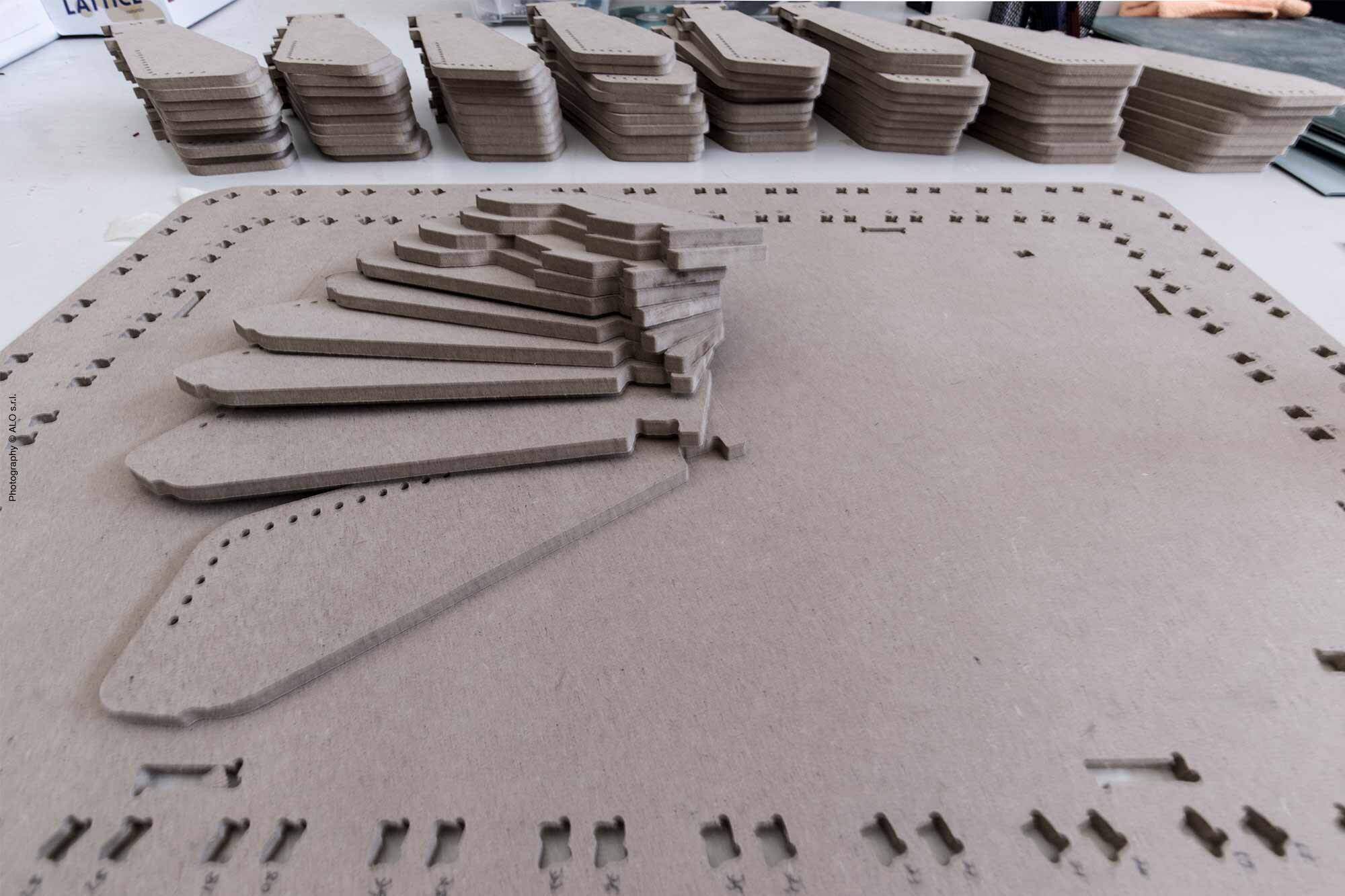 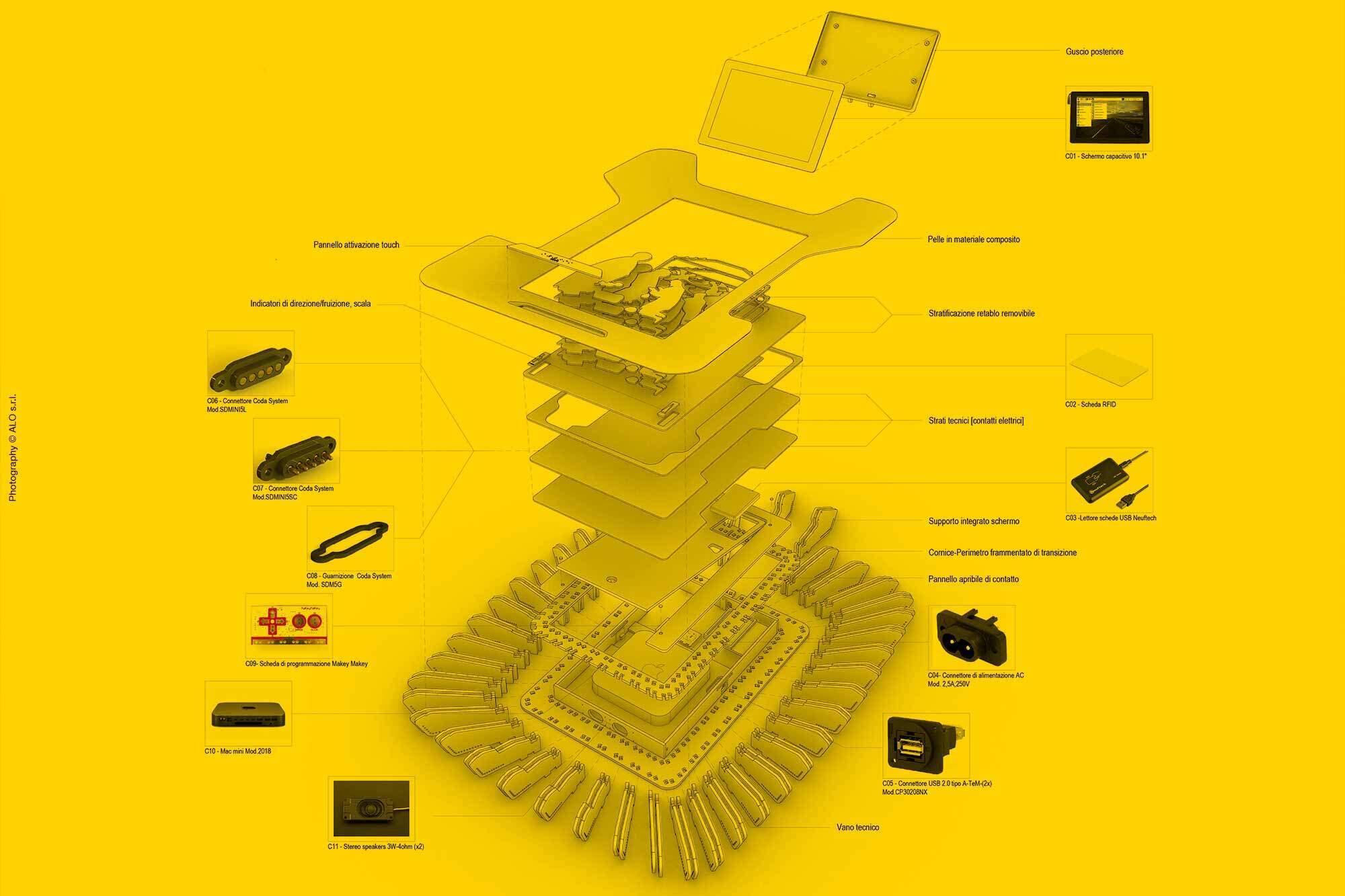 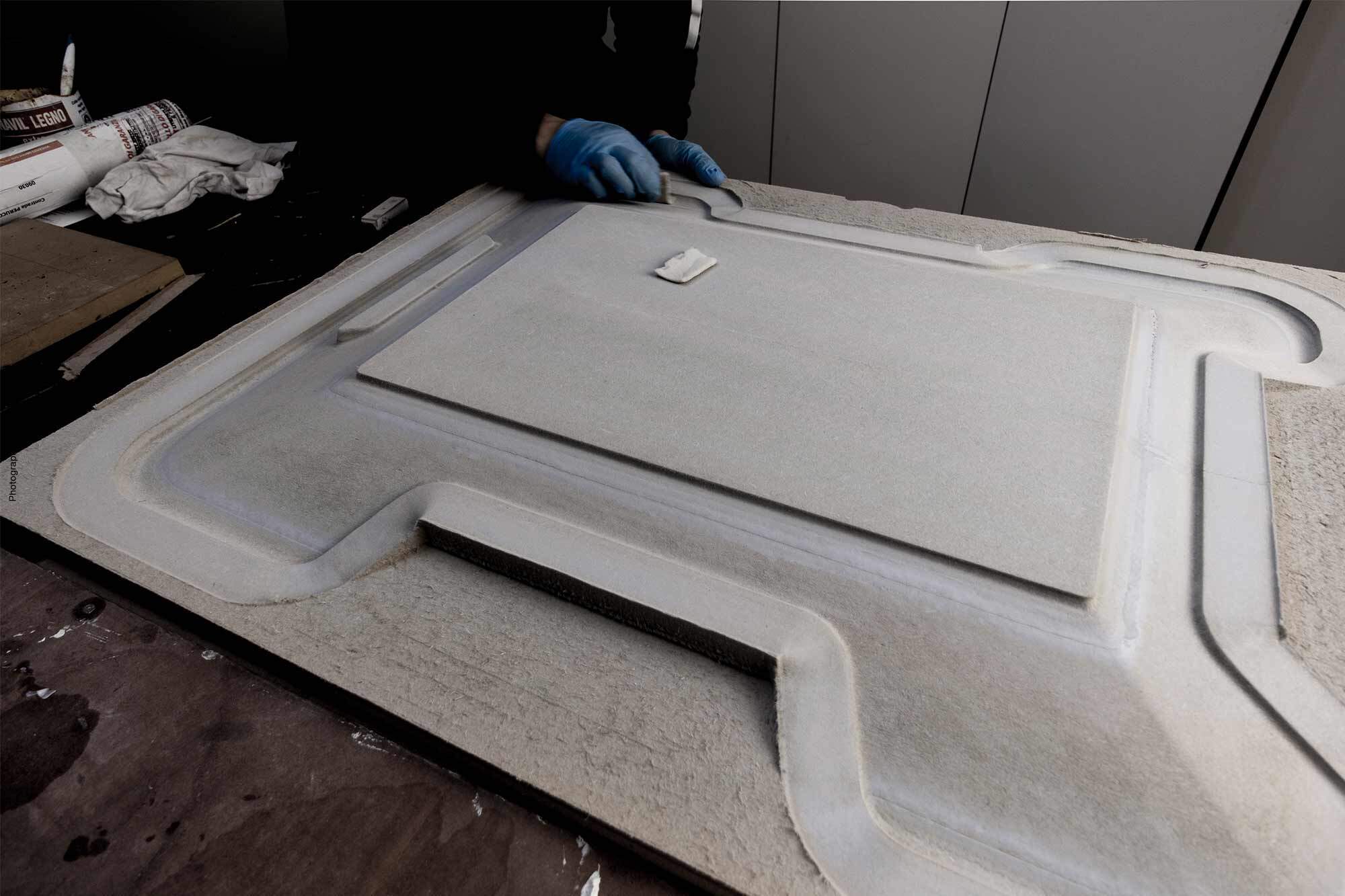 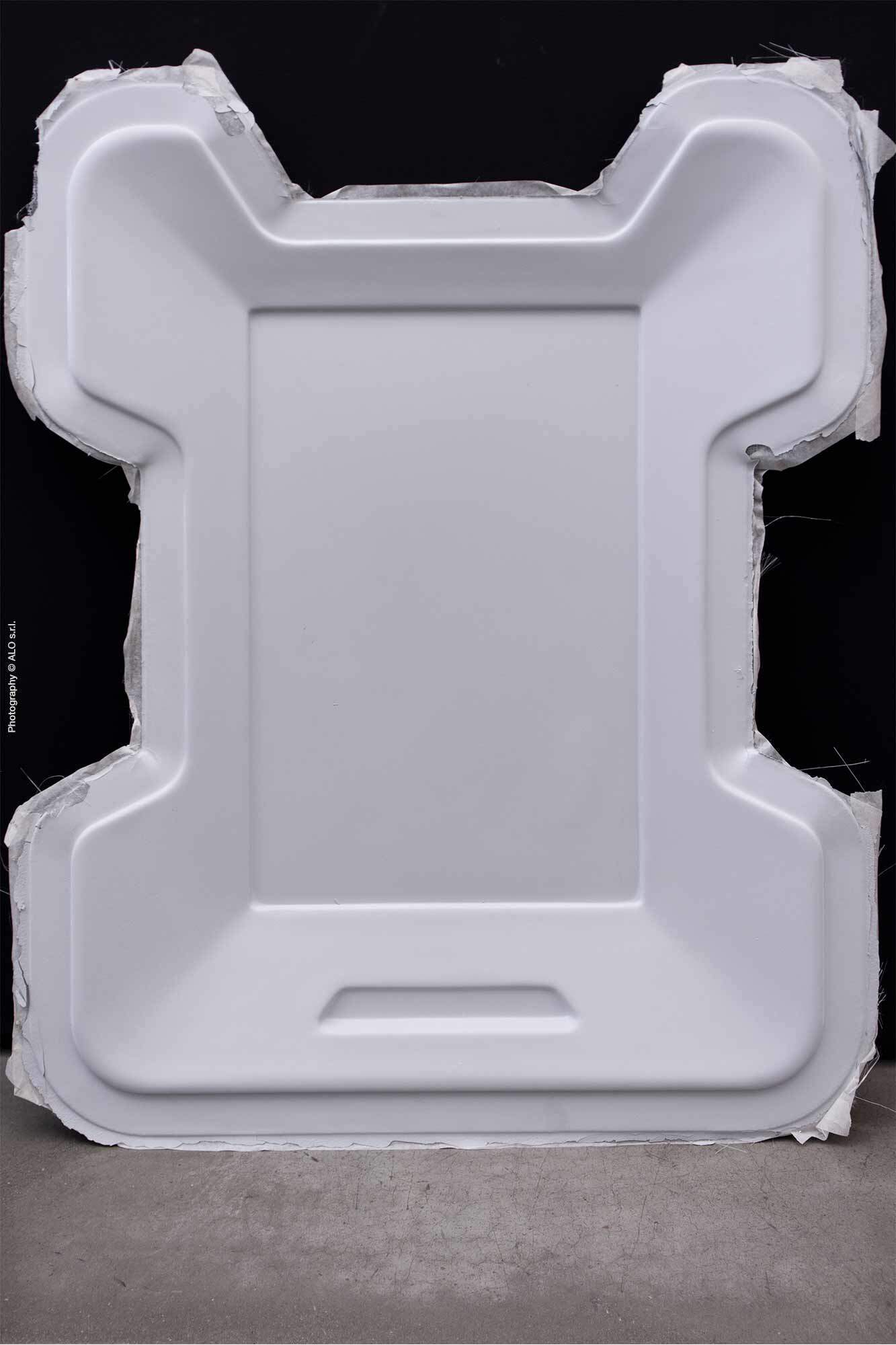 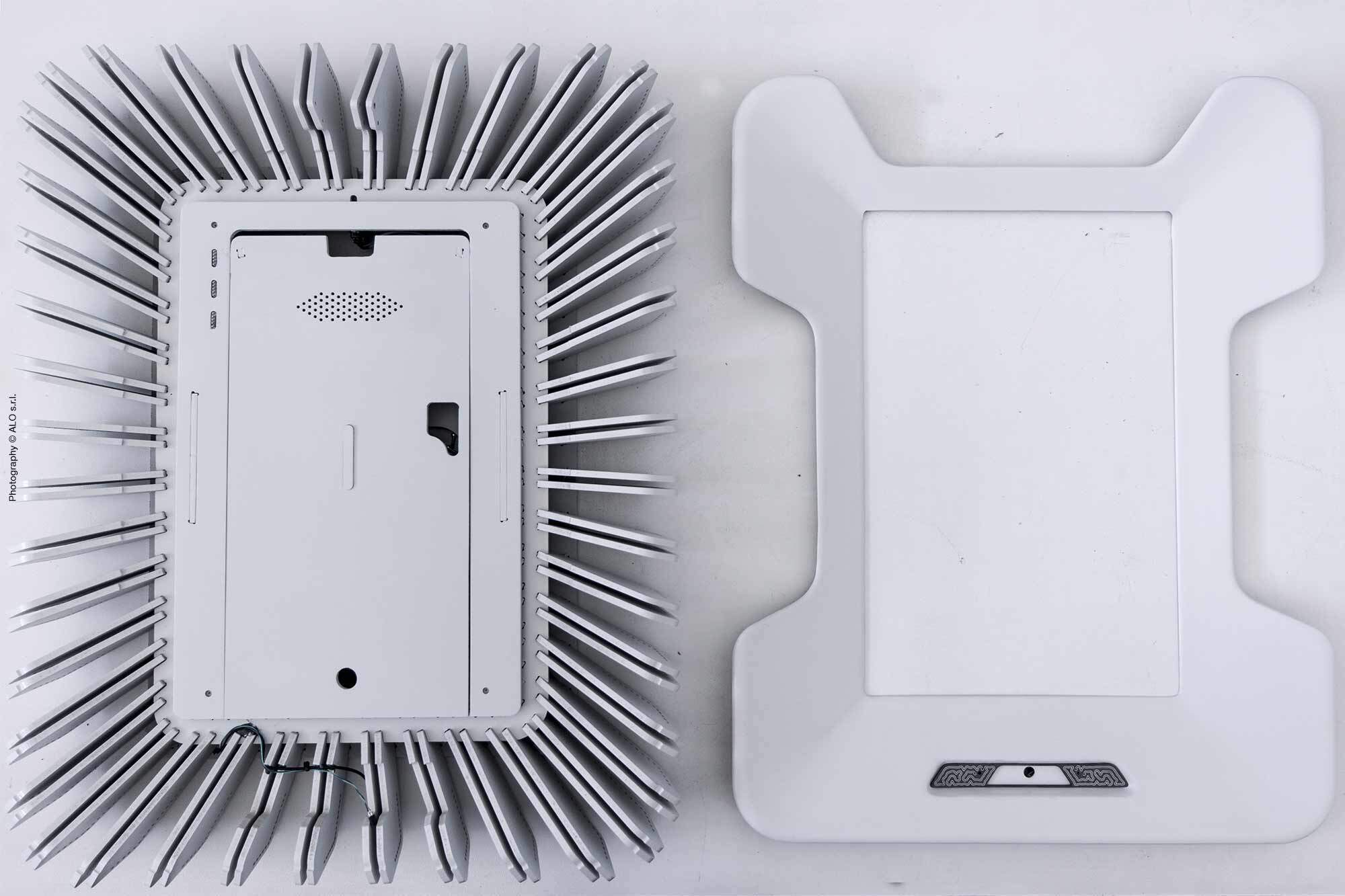 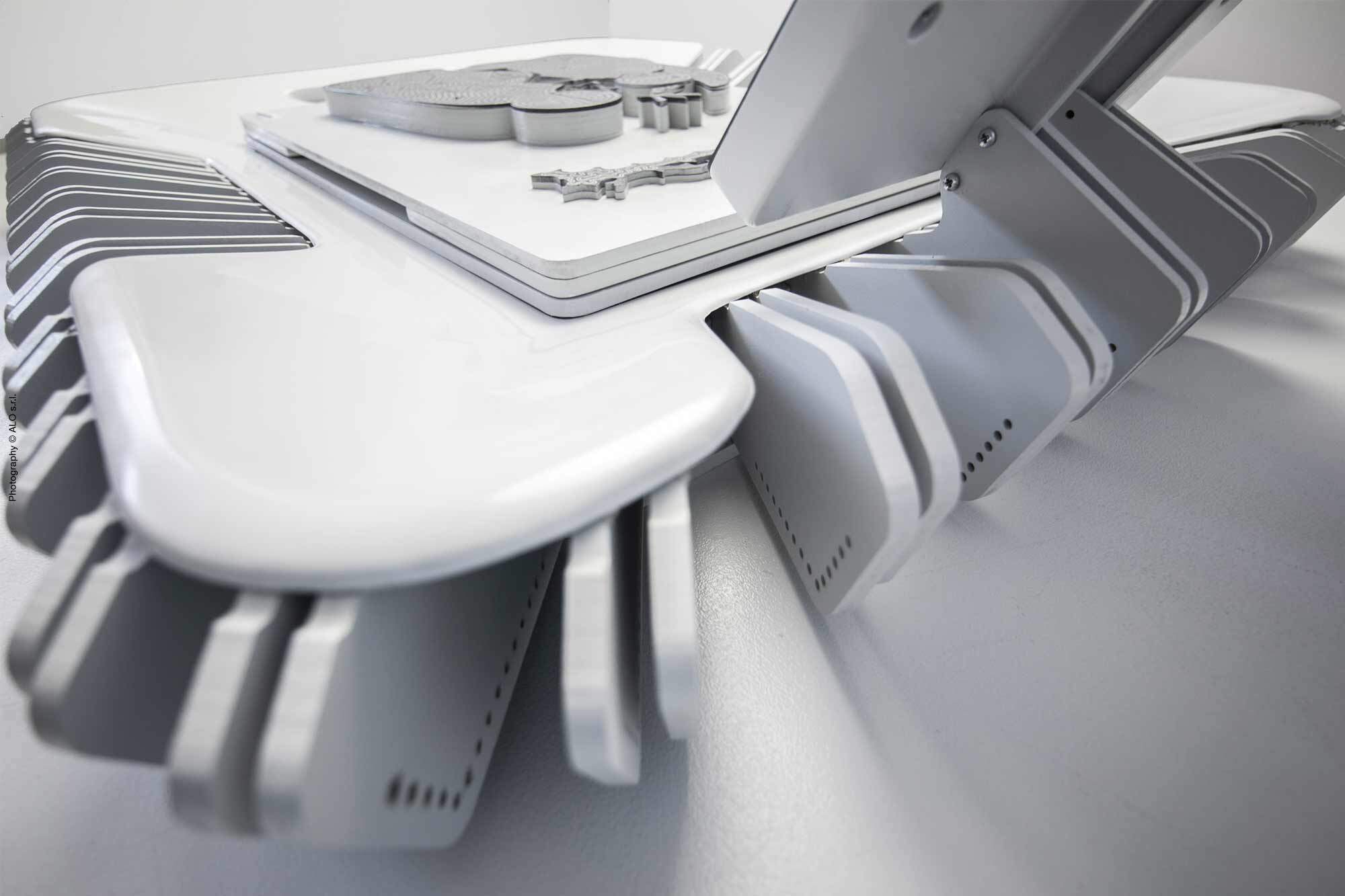 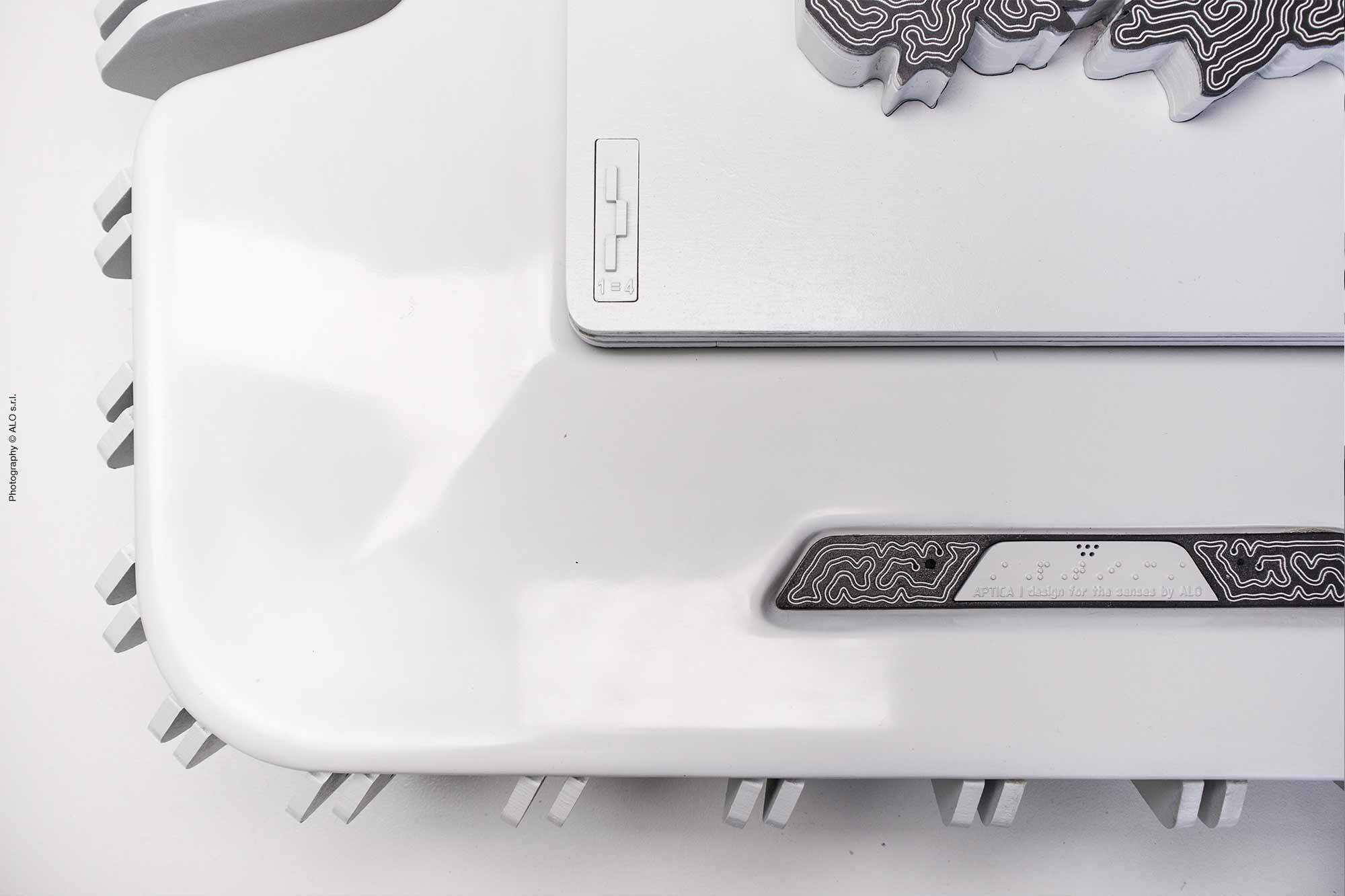 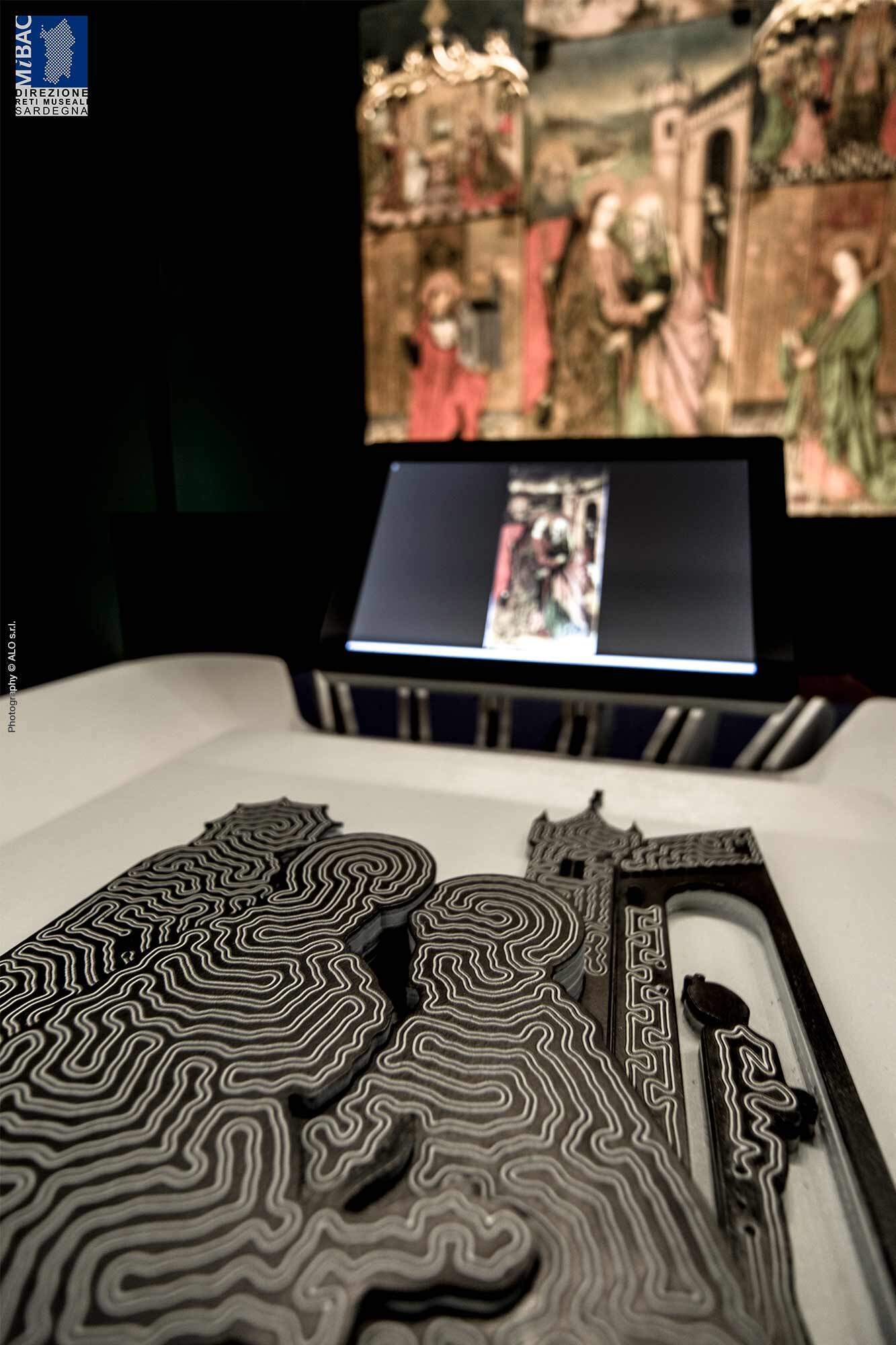 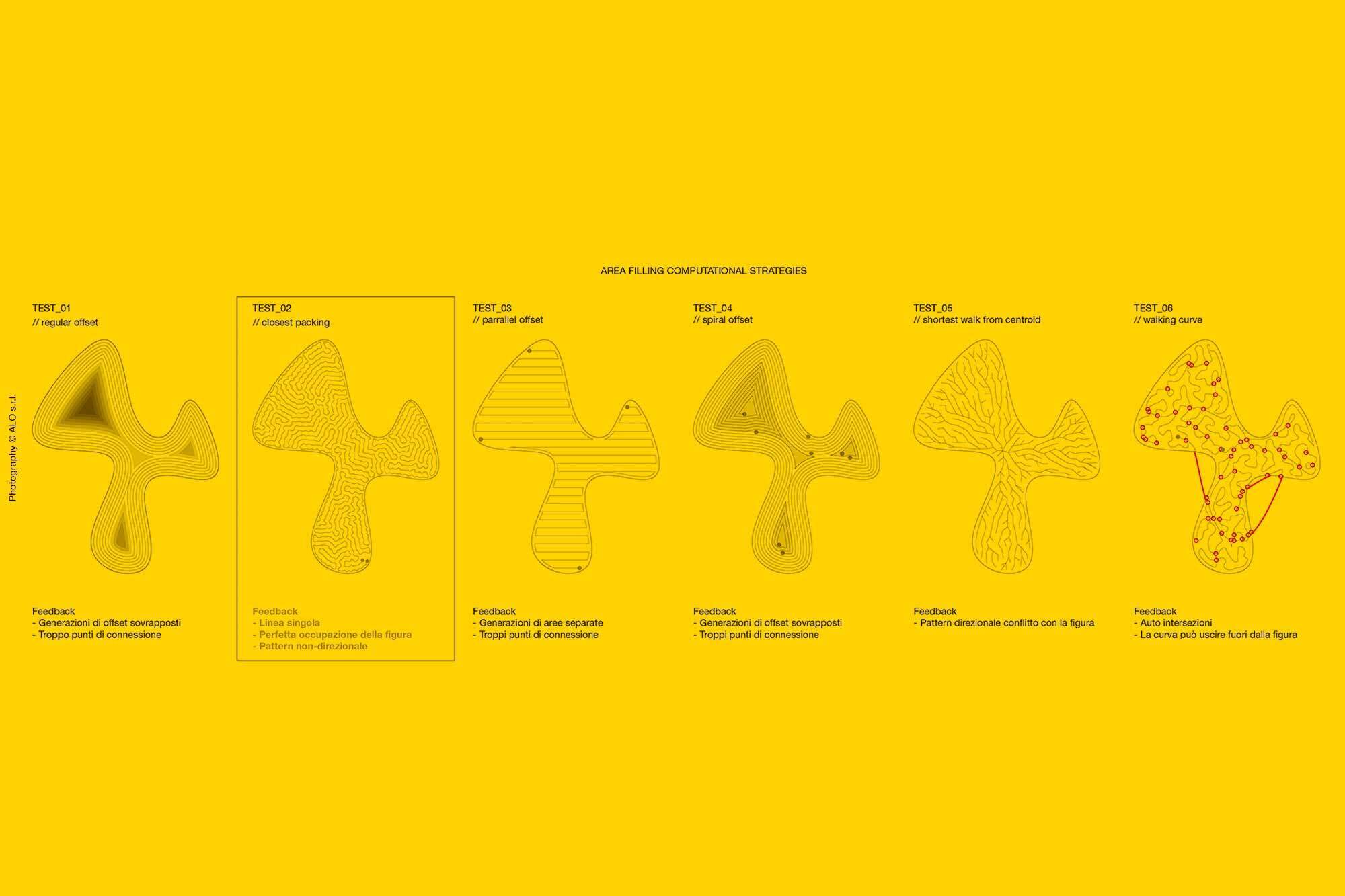 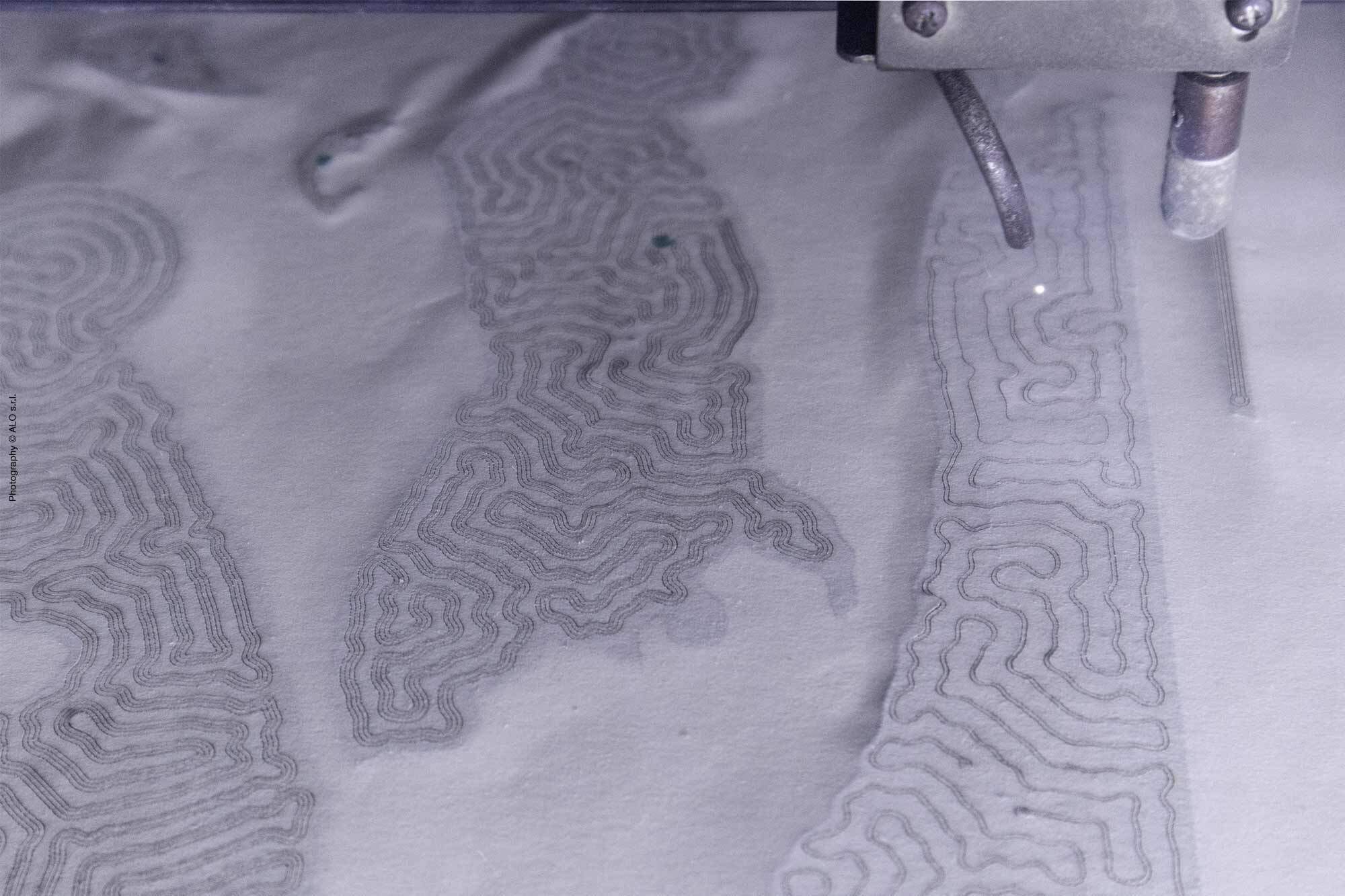 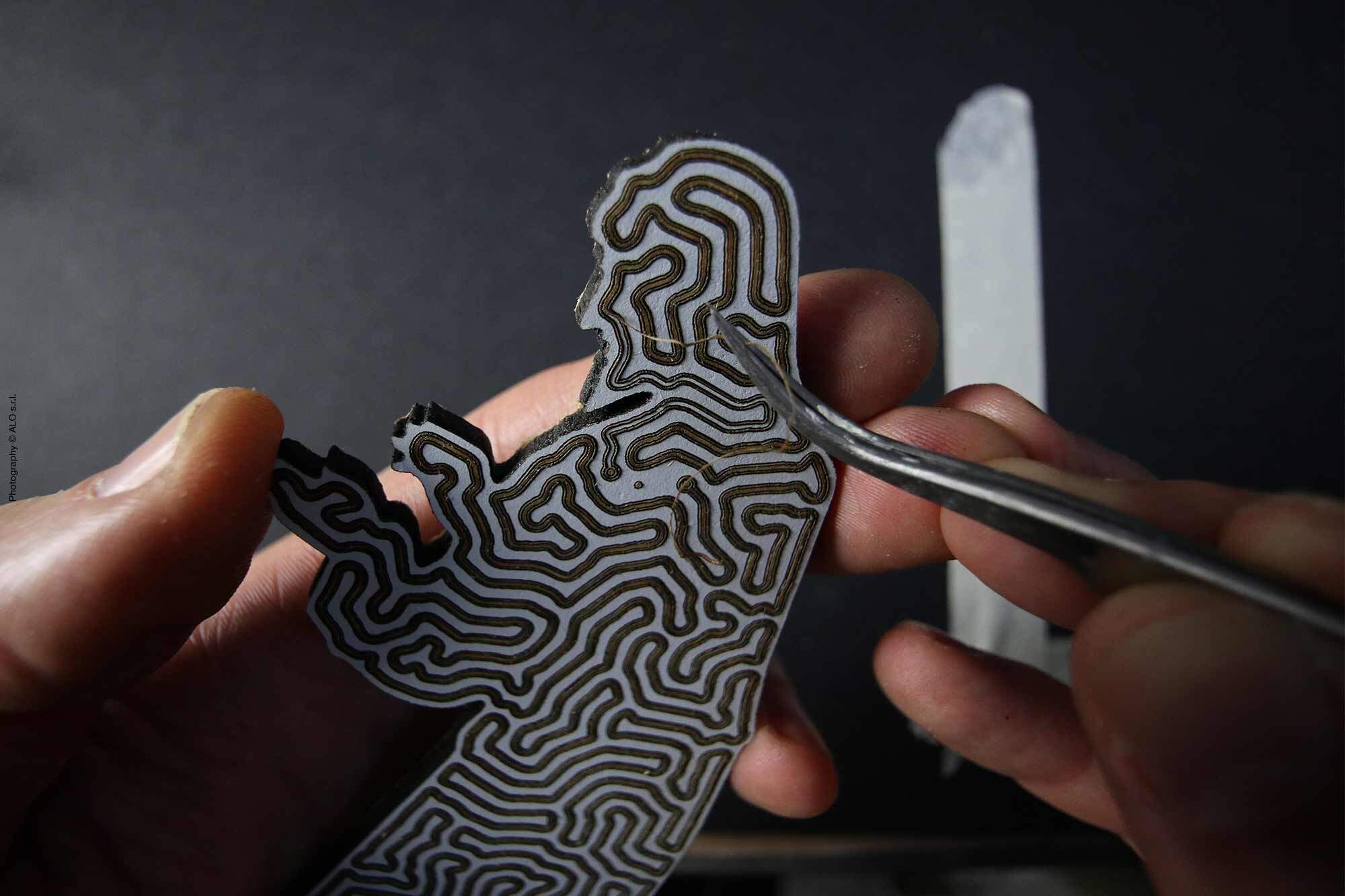 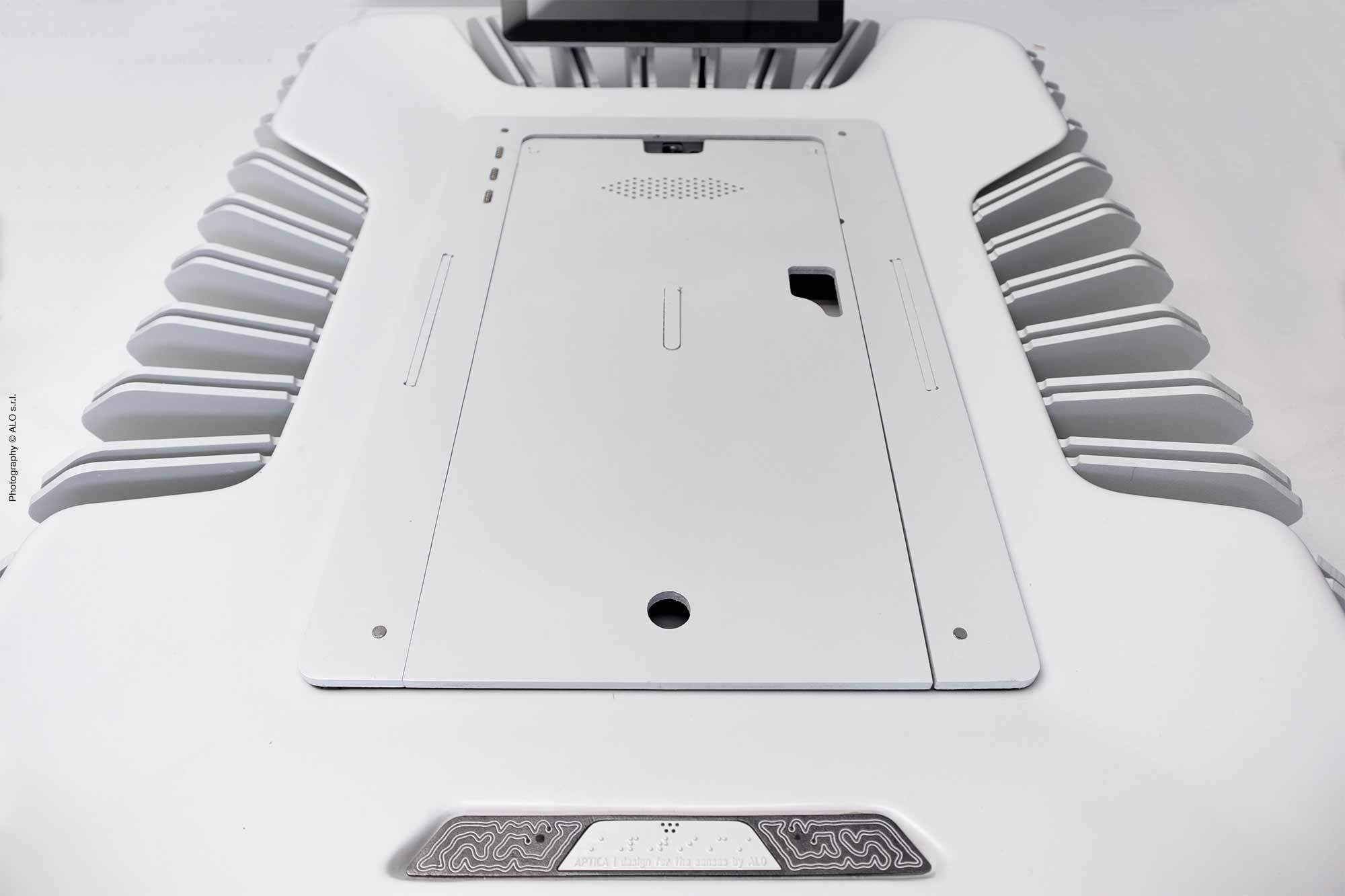 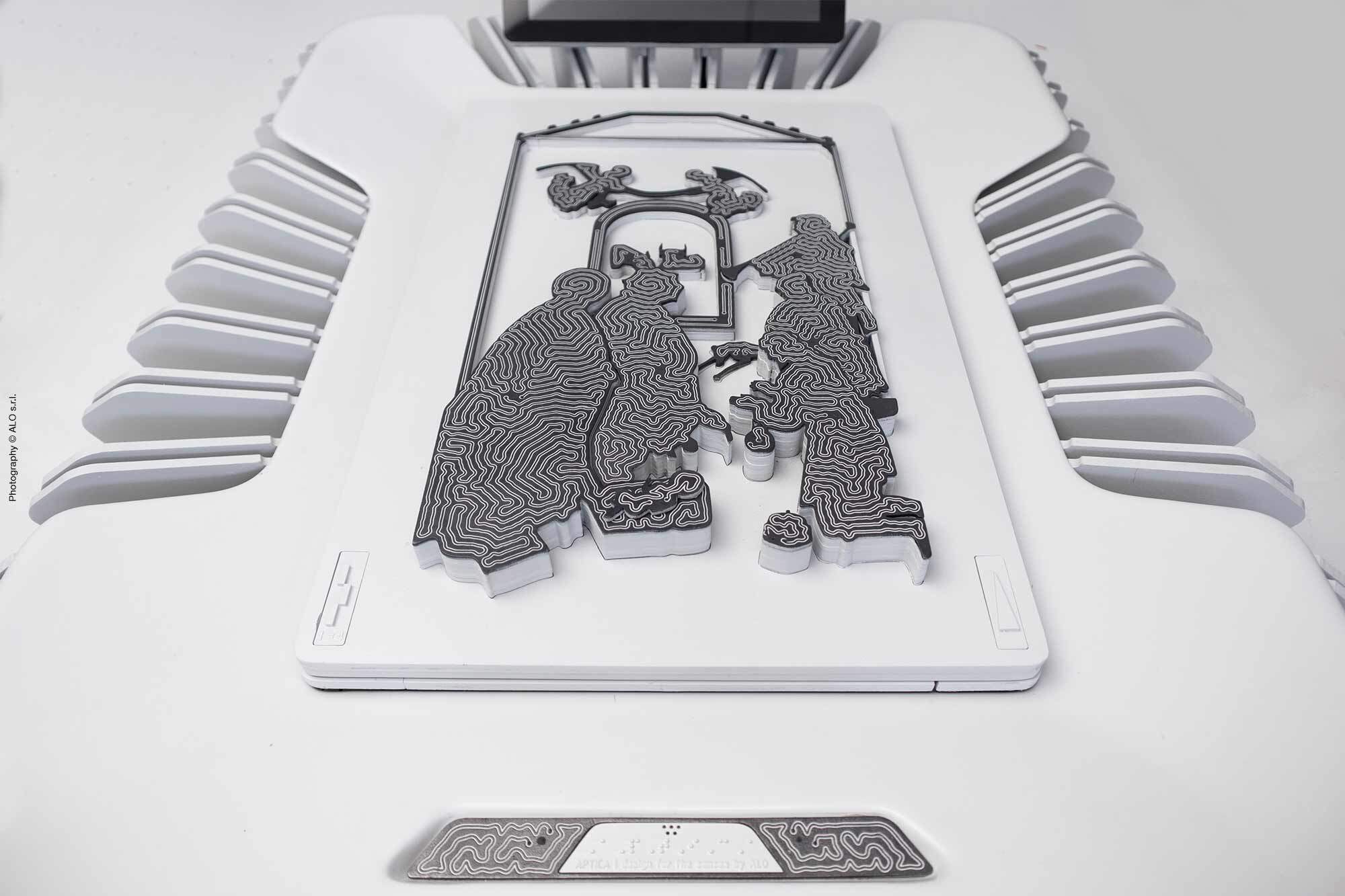 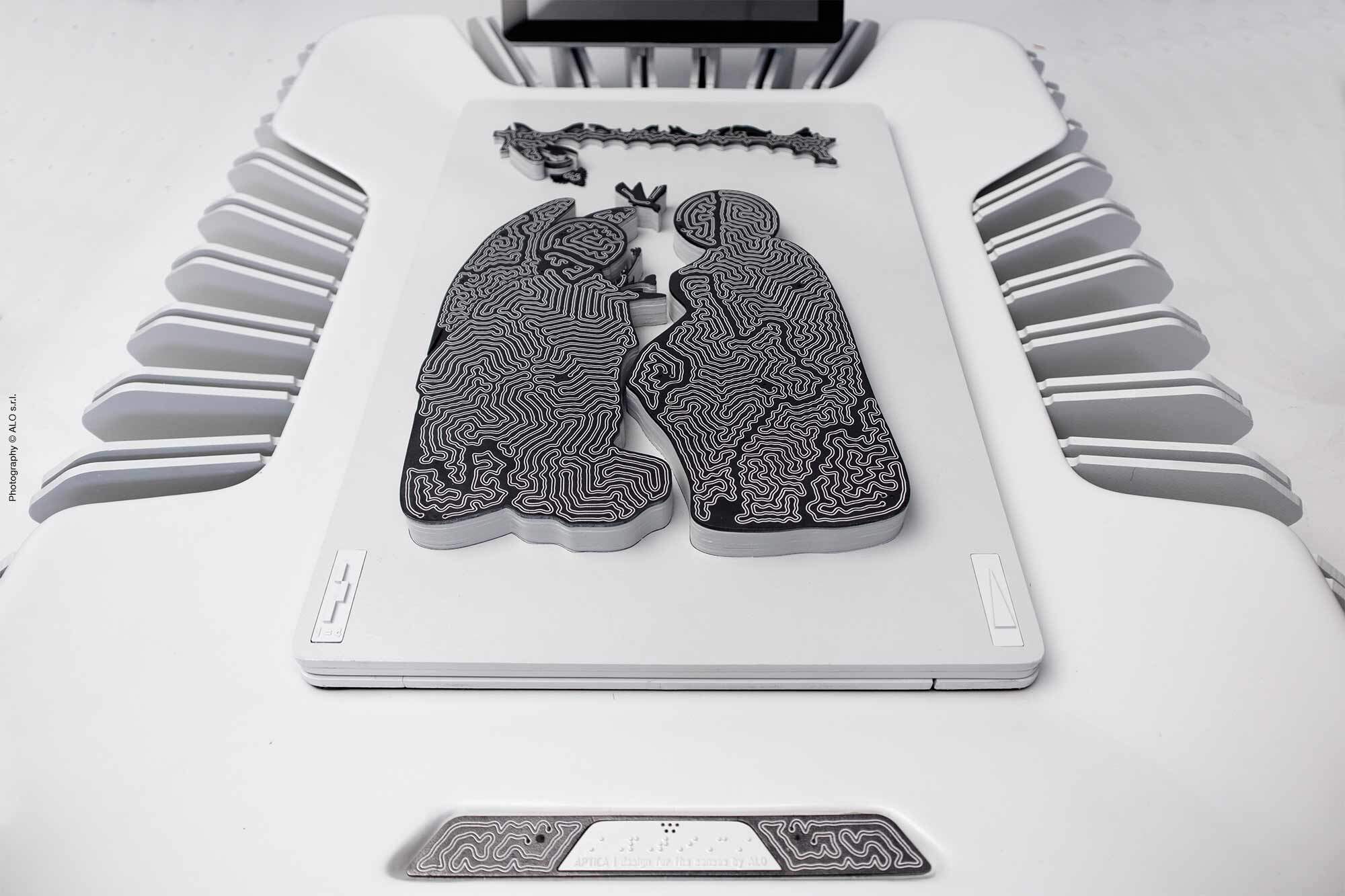 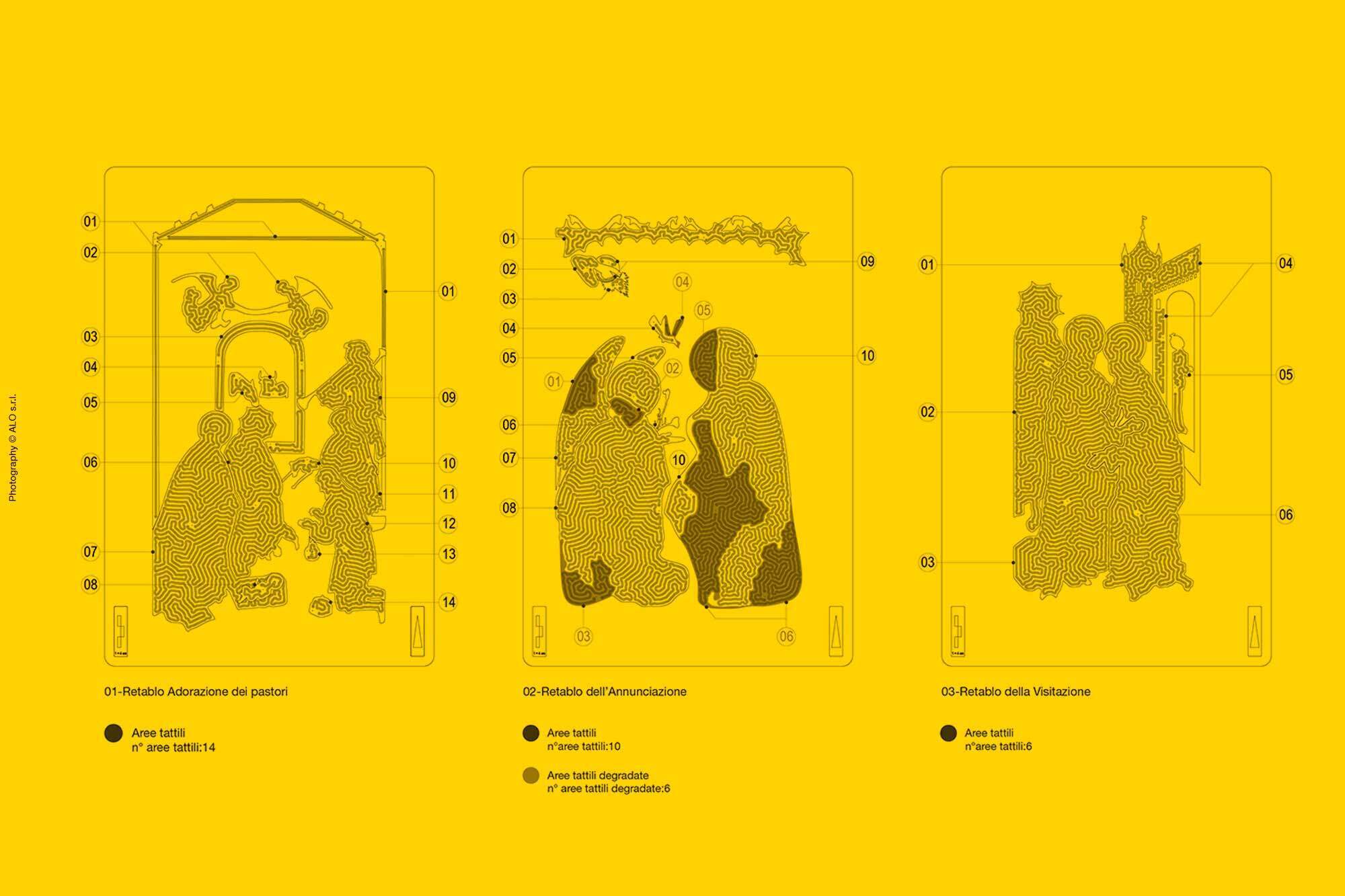 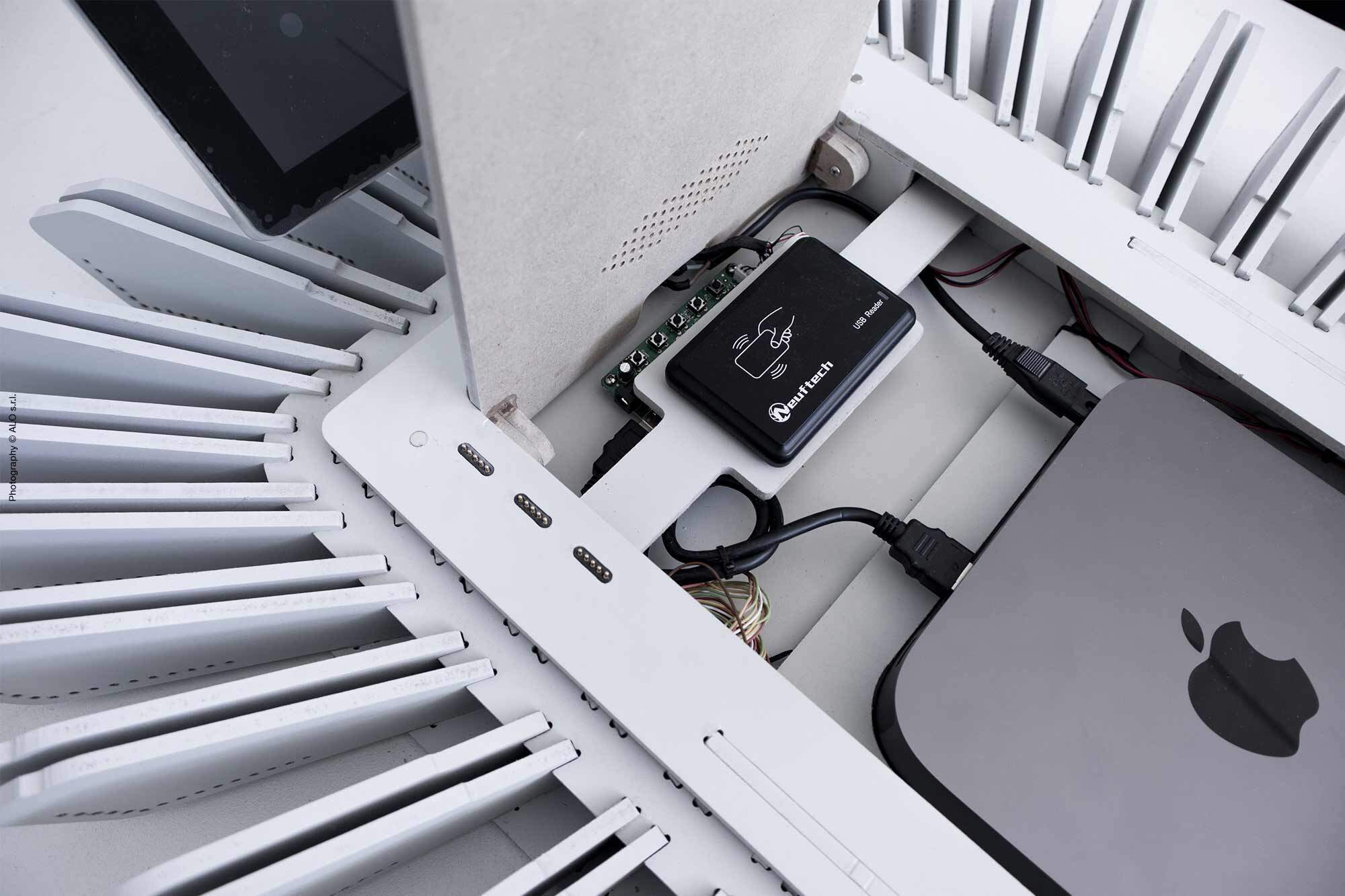