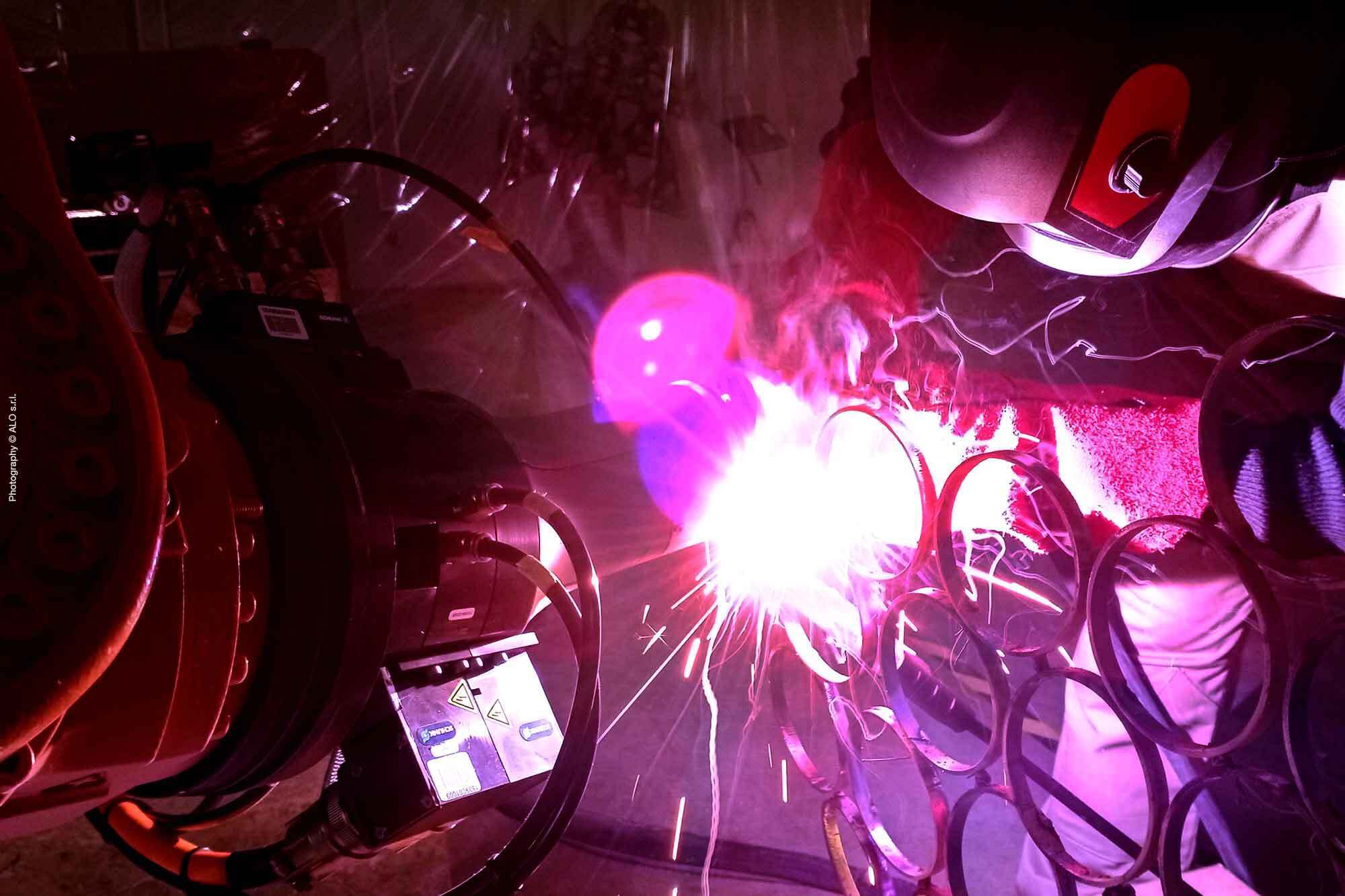 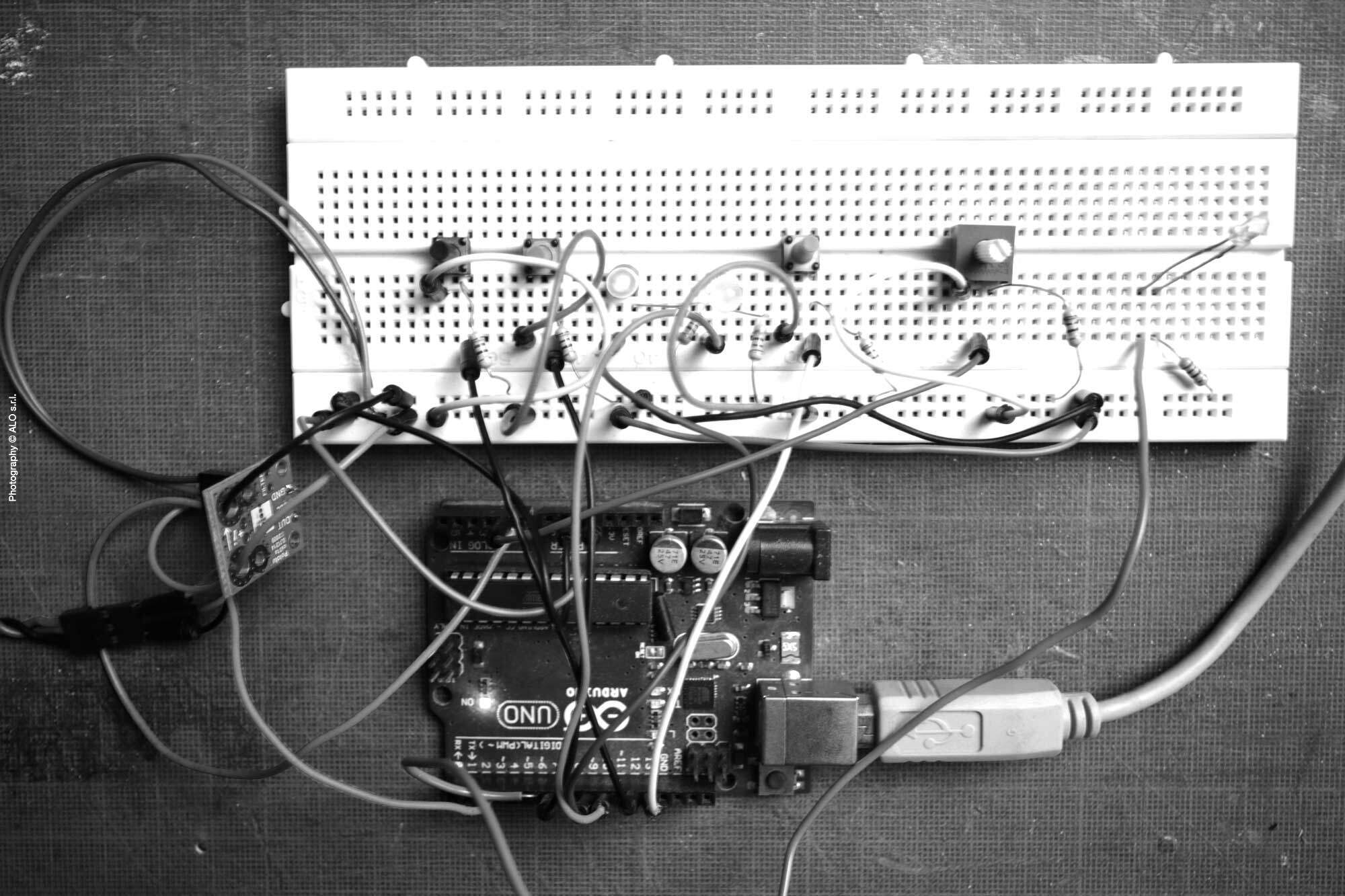 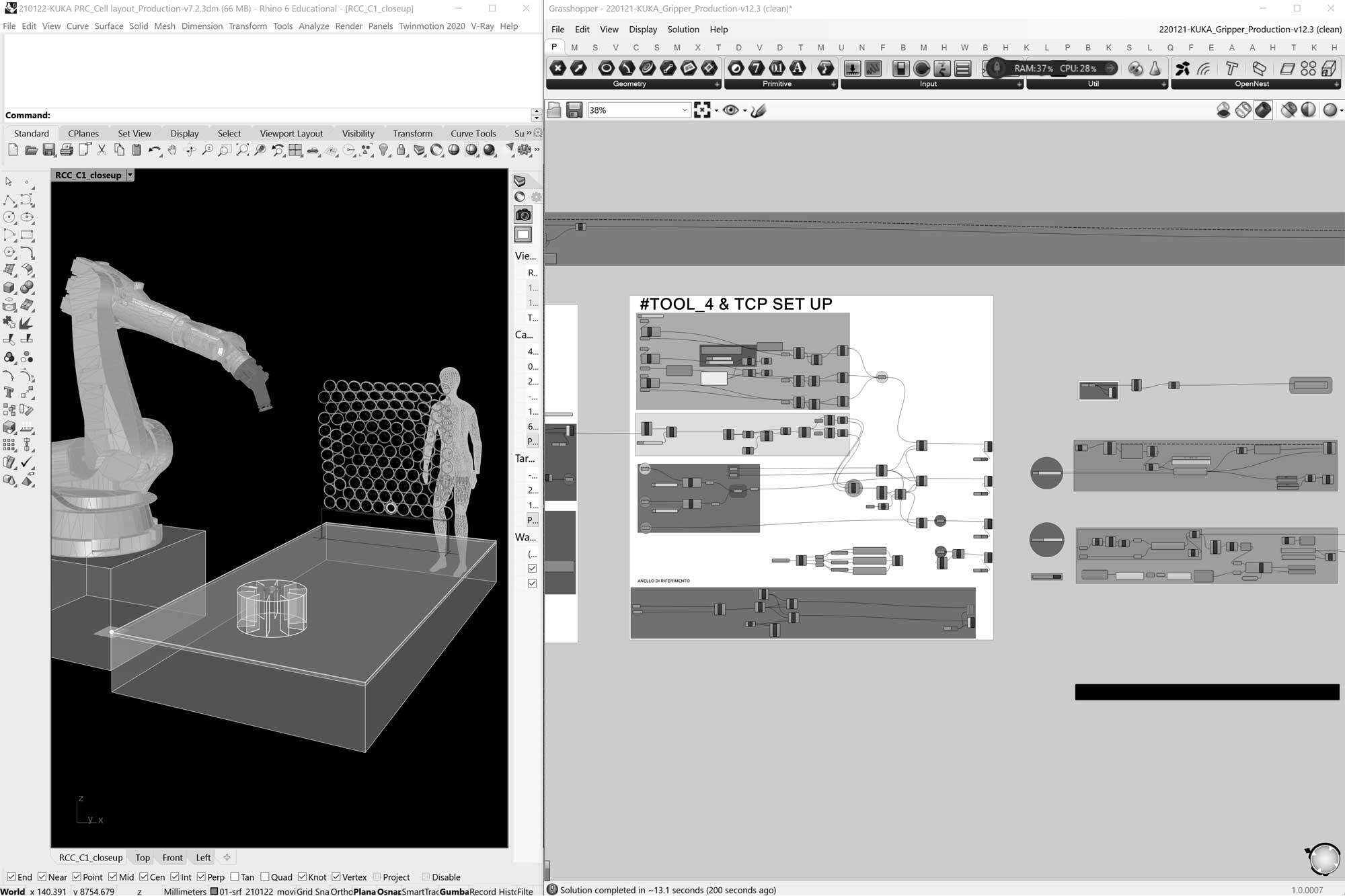 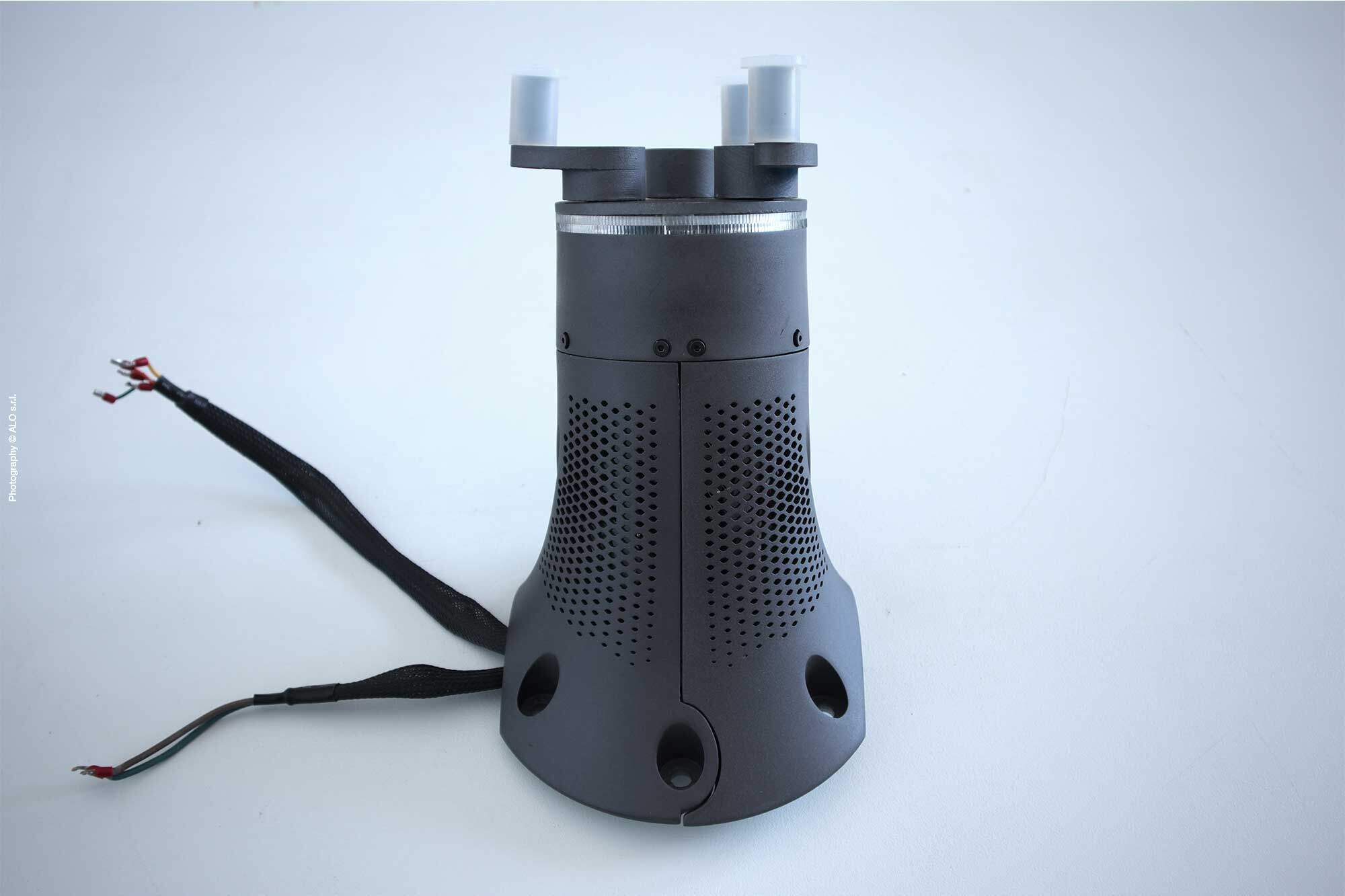 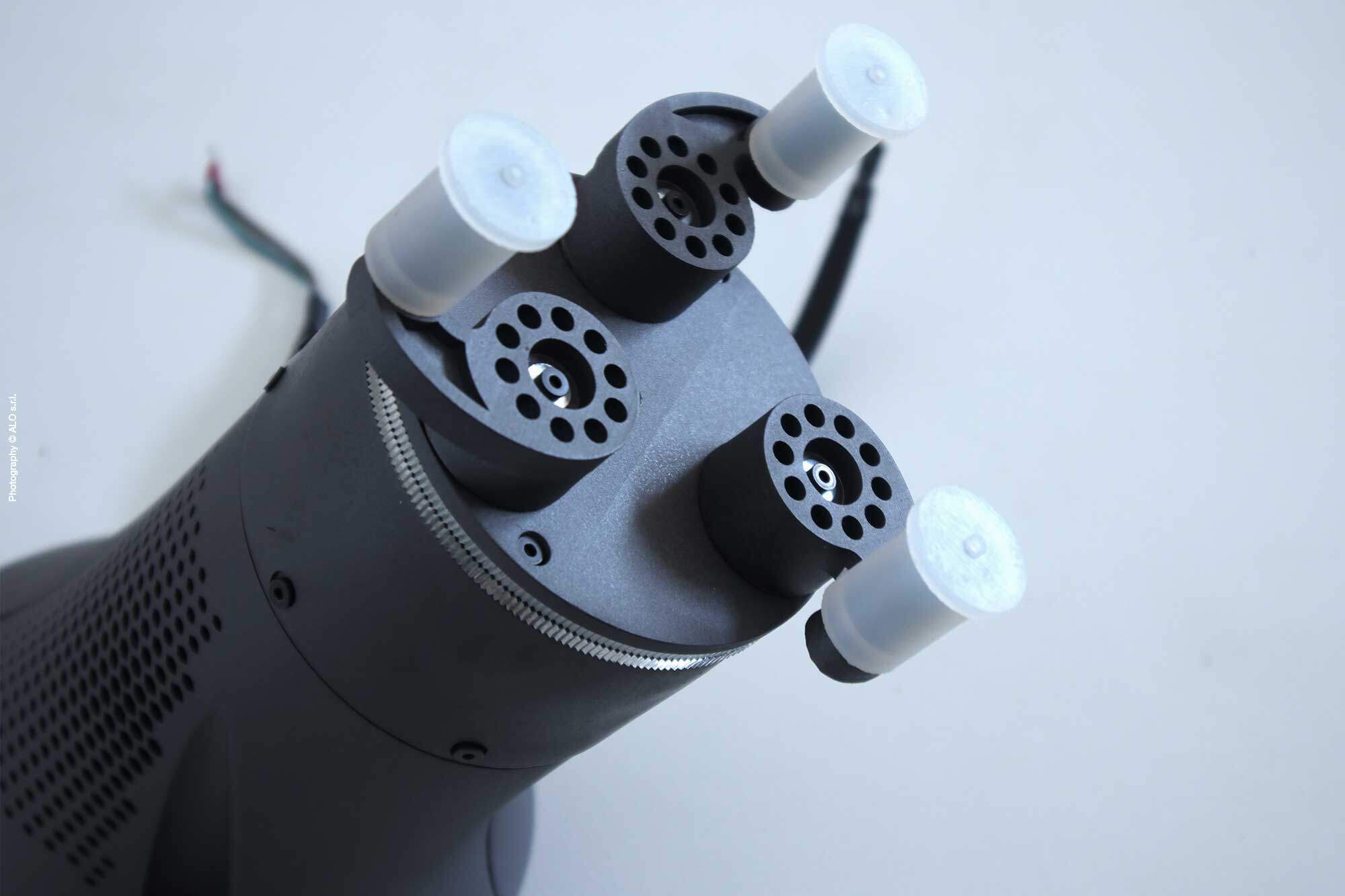 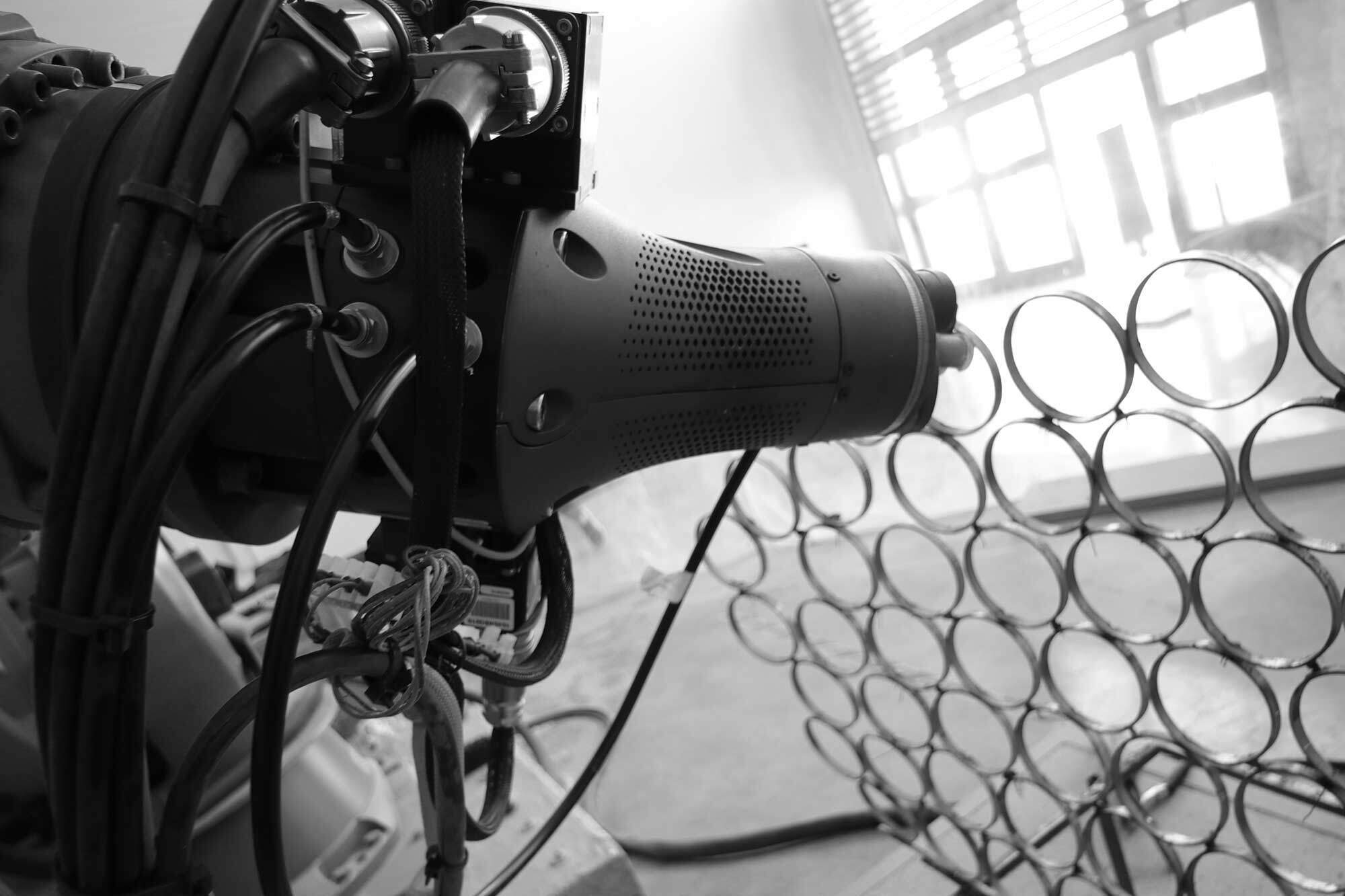 We believe that the collaboration between humans and robots should be more than the substitution of man labour in repetitive or heavy tasks. Rather, by adopting a humanistic approach to technology, and taking a critical position with respect to certain absolutist and technocratic visions, we want to understand when robotics becomes an added value, as well as a need, in architecture.

We aim to design new architectures that will gain new material, physical and performative qualities thanks to these collaborative processes, as to improve the quality of life, of the environment within they exist and their efficiency throughout all phases of their life, including that of construction. But far beyond the technical and technological aspects, RCC aims to be a thinking instrument for studying new possible futures in architecture.

Thus, RCC research agenda aims to support the design and production of buildings, non-standardized or semi-finished prefabricated that are an exclusive output of a collaborative construction process. We are looking for a critical step towards an innovative production that is kind to the environment, attentive to the enhancement of human resources, and focused on finding advanced applications for traditional raw materials.

RCC, is therefore a design-research project and was granted in 2019 by the “Microincentivi per l’innovazione” program of Sardegna Ricerca and carried out by the architecture studio ALO s.r.l. under the guidance of Eng. Marco Verde, MArch. This base research phase was carried out in 2020 and produced the software (parametric production ad simulation environment) and hardware (RCC custom gripper) innovations needed to build the first RCC pilot prototype: a double-curved membrane consisting of prefabricated metal components. The construction required a symbiotic work between man and robot; an interaction during which the two parties took turns successfully took turns in the activities best suited to their abilities.

Like many digital technologies that until now have been relegated to the confines of factories, robotics is undergoing a phase of democratisation.

Productivity has increased to the detriment of the employment of certain professional groups, although, at the same time, robots have also promoted the emergence of new figures, markets and the specialisation of existing ones.In this context, we believe that there is the possibility of embarking on an alternative and more virtuous path where robotics is not a trivial substitute for man, but a tool to enhance his skills and abilities.

By overcoming mistrust, also through adequate widespread technological education, and by developing a critical reflection on the humanistic value of these technologies, a true deontology to guide their adoption, we will be able to embark on a path of research and development that prioritises the interaction between man and machine and leads to collaborative productions that could not be possible without such interaction.

Could we perhaps talk about ‘Industry X’? Where the symbol X represents a new concept of the intersection between man and machine.

In this context, robotics, like any other automation or computation tool, would not be adopted simply for its increased speed or ability to replicate human actions (a concept already experienced in the era of mechanisation), but rather as a tool to augment human abilities to perform tasks not otherwise possible. There we would only talk about a rich and sustainable collaboration. In practice traditional craftsman skills, as well as those of a robotics and automation experts already intersect, creating new professional figures and unprecedented new products. Undoubtedly, the creation of an intellectual and cultural framework becomes fundamental to enhance and ennoble the adoption of robotics and identify its ethical role in society.

PARAMETRIC DESIGN AND PROGRAMMING. A NEED FOR FOR COLLABORATIVE ROBOTIC MANUFACTURING IN ARCHITECTURE.

We believe that human-robot interaction is a crucial node for a complete introduction of robotics in architecture. Thus, in 2018 we started the first explorations for the design of two collaborative robotic fabrication protocols. From the very beginning, the aim was to build a complex pilot prototype assembled by a robot interacting with one or more operators.

Currently, collaborative robotics is presented on the market as an aid in heavy or repetitive processes, therefore as a tool to improve existing activities more than instrumental to innovate the products themselves. Consequently, the first cobots and devices launched on the market are mainly optimized for a fast programming to automate repetitive operations for serial production.

Differently, at the core of RCC agenda is the chase for effective parametric protocols to foster non-serial production. We want to exploit truly the potential of digital manufacturing with a renewed approach.

With this goal, the development of integral parametric design strategies that directly link the project phase to the programming of robot movement paths and the simulation of the end effector to check process issues and risk factors becomes essential.

We believe this is the path to develop economically effective but still heavily innovative and sustainable design also for small scale, “every day” architecture projects.

We originally called our protocols ‘Robotic Collaborative Constructions’ (RCC), processes in which man and machine sum their abilities enabling complex productions not possible to achieve otherwise.

The RCC method therefore aims to enhance the ability, versatility, awareness and intuition of human operators towards a greater flexibility and agility in digital production. Indeed, digital or robotic fabrication is not always necessary or an advantage in terms of project and production sustainability. Our approach is distinctly humanistic, so we aim to identify when and why robotics can add value. RCC procedures enable us to build semi-finished products for an innovative and more sustainable construction industry by reducing production errors and waste of raw materials.

At present, research into robotic manufacturing in architecture is primarily addressed within the academic world at universities such as ETH (Zurigo), AA (London), ICD (Stuttgart), among the main players. In Italy too, architecture is showing some interest in robotics. In 2015 Studio Ratti, for example, designed a robotic bar, and several universities are equipping themselves. In this context, ALO has embarked on a true R&D path with the aim of a tangible transfer to the built environment, starting from small scale architecture projects.

The RCC (Hardware + Software) technologies we have developed will enable new products and services that are at the frontier of the research in the sector. The most innovative applications of robotics in architecture today are mainly found in projects that are often demonstrative and on a large scale, and therefore intended for non-daily use such as museums, pavilions or exhibition spaces. Thanks to the RCC technologies ALO will work instead to transfer its innovations into practice starting from scale architectural projects. In fact, we want to undertake a virtuous and effective path for the mass diffusion of quality and innovation in architecture starting from small works that, in terms of number and land consumption, importantly affect urban and suburban areas.

The research activities of the RCC project, both for the software and the hardware development, were granted by the “Microincentivi per l’Innovazione” program promoted by Sardegna Ricerche. The funding has enabled us to complete important basic research work and test the implementation of these protocols as to be ready to offer our customers a new line of advanced products and designs.

We would also like to thank the company Marini SPA for sponsoring the creation of the pilot prototype by offering the laser-cut steel components produced at their factory in Cagliari.