The integral renovation project for a Fine Guesthouse in Sardinia.

Villa Vi is an integral renovation project to transform a villa built in the ’60s and located on the coast of Golfo Degli Angeli in Flumini (Quartu Sant’Elena) into a fine guest house. Developed on three floors of 100 square meters each, the villa was in a state of neglect but the triangular arches at an acute angle (approximately 80 °) bordering the porches on the ground and first floor still stood out for their tectonic impact on the building. The very topology of these polygonal openings has been reinterpreted becoming the generative trace for the new project, from the garden landscape to the interiors and the collection of custom furnishings POLYHEDR.a.

Following a systemic approach, we worked to enhance the morphology of the preexisting topology in order to define a continuous relationship between interior, exterior and furniture blurring their respective, physical boundaries. One of the main goals was to offer future guests an immersive, spatial experience. Therefore, the usage of spaces has been redefined enhancing the link between architecture and time beyond the mere utilitarian needs.

The work of research has therefore put at its service the most advanced design and production technologies currently available to ensure that the architecture and the experience proposed would be a determining factor in the choice from future guests. This led to novel design proposals that required the development of computational environmental analysis, the study of non-standard construction solutions, high-precision details, as well as the integration of craftsmanship with robotic digital manufacturing processes.

Although the villa occupied an almost barycentric position within the plot, the architecture was completely disconnected by the surrounding spaces; this immediately appeared a critical opportunity for a new design. Accordingly, we developed the new project as a pattern to organise the garden while creating a systemic link between outdoor, main building and indoor spaces. Additionally, the architecture itself, by form and matter, had to play a fundamental role in passively creating favourable environmental conditions to foster the wellness of guests during the various seasons and offer a regenerating experience.

The layout of the garden proceeds from a process of space occupation informed by a computational simulation of solar radiation that allowed to measure the behaviour of the site over time. This digital study revealed the sunniest and hottest areas in summer and the darkest and wettest ones in winter. At the same time, the geometry of the unique triangular arches was proliferated on the ground to create a new mesh. Finally, this was developed in three dimensions in relation to the environmental data. The landscape has thus gained its spatial articulation in terraces with heterogeneous, functional and material characteristics that give depth to space enhancing the small size of the garden as well as emphasizing the perception of the levels compared to the real useful total difference in height of only 50cm.

The environmental analysis itself has guided the differentiation of the materials in the various areas. For example, wetlands are characterized by a permeable flooring to improve the drainage of rainwater. Similarly tree species and the various green areas follow an organizational logic related to exposure and irradiation. The pool found its position in the area with the greatest radiation during summer; hence, it mitigates the effect of high temperatures. Inside the pool itself there is a submerged seat that occupy the only point in the plot from which you can watch the sunset, now under the refreshing waterfalls blade coming from the pool edge.
The alternation of terraces, paths and vegetation, where the latter takes on an architectural value in the very qualification of the spaces, creates the environments for meditation, recreation, reading and relaxation that characterize Villa Vi integral renovation project.

The main guest rooms feature an adaptable layout which core element is a polyfunctional partition wall that organizes the space of the room without interruption. Since the facility would have been especially active in the summer, we decided to give showers an architectural value as well as utilitarian: these are full-height volumes integrated along the partition wall but separated from the main bathroom in order to make their use independent and turn them into a barycentric element.

The wall houses two totally concealed folding doors. The first serves as a closure for the bathroom while the second separates showers hallway from the room if necessary. On the other side (facing the room), the partition develops into a hybrid wall system that combines in a single complex element the functions of various accessories for the comfort of guests such as the desk, a set of shelves and a luggage rack.

The POLYHEDR.a furniture collection, of which these pieces are part, also includes a set of totems installed in the corridors to mark the accesses to the rooms with an integrated, ambient lighting system. While the hybrid walls are entirely made of birch plywood with natural finishing, for the totems we experimented a seamless coupling and finishing of lacquered MDF panels with natural wood.

The POLYHEDR.a collection, created explicitly for Villa Vi integral renovation project, is the result of a research and development aimed at enhancing both the computational design approach and the 6-axis robotic manufacturing procedure, so much so that none of the furniture could have been produced with traditional artisan methods.

Finally, each room is equipped with a custom polyfunctional cabinet that is an extension of the partition walls. This houses a wardrobe, a built-in refrigerator and a fold-away bed. Also, the consoles with fold-away TV (designed as extensions of the beds) and the custom headboard with double-shelf, bedside tables made of folded metal sheets are accessories designed by ALO.

The POLYHEDR.a. furniture collection and the POLYHEDR.a/r (reverse) formwork system (for reinforced concrete components) are both a product and process innovation that enables innovative uses of traditional materials through a systemic approach to architecture, engineering and manufacturing.

The two systems are a complete and original expression of ALO research aimed at studying computational processes for non-serial prefabrication in architecture. Based on a computational thinking, with these two adaptable systems, we wanted to emphasise the adoption of machinery originally created for industrial mass-production, reinterpreting its use according to the logic of digital manufacturing that binds design and product in a non-linear way in favour of differentiation.

The development of the robotic manufacturing processes has thus acquired a humanistic value, becoming both a technological necessity as much as an instrument for thought that doesn’t replace human labour but rather increases his thinking ability. Applied for the first time for the integral renovation project for a Fine Guest House in Sardinia “Villa Vi”, the research work had as its primary goal the production of architectural, refined furnitures and components with morphological, material and constructive characteristics such as to exist only as a result of a full computational process from design to robotic production.

While the POLYHEDR.a automated parametric design system was developed to produce polyhedral morphologies with monolithic-look and natural wood finish, the POLYHEDR.a/r formwork is intended to produce concrete elements with a smooth finish without the aesthetic marks left by traditional formwork systems (which module never follow the geometry of the parts). These goals led in both cases to the choice of the “Quartabuono” joint to assembly the building components.

This type of joint is used in carpentry to join wooden elements that must form a right angle with the section of the material not visible to give continuity to the grain. However, when it comes to irregular polyhedral figures, concave and convex, with more than three faces converging on one edge, several geometric complexities emerge that make it impossible to implement the design and fabrication by traditional processes. This, together with the requirement for adaptability of the furniture (necessary to fit the pieces to the different sizes of the rooms), has made the design of an automated design system and the digital fabrication of parts a necessity.

Accordingly, we developed a custom software that allows to work on a simplified faceted figure, a “skin without thickness”, in order to easily define the shape of the artefact according to the feedbacks of the software itself that checks the compliance with the minimum angles values between adjacent faces so that the limits of production and assembly are always respected. After defining the morphology, the software processes the digital prototype in a totally automated manner, transforming the simple faces into 3D elements with thickness and all the information for production. If the designer changes the design, the executive data is recalculated; there is, therefore, a continuous flow of data between design and the production phases.

POLYHEDR.a system recognizes also the 3D orientation of the individual faces of the morphology and orients them ready for production on a XY plane with respect to the direction of the grain of the raw sheet to be processed. This sophisticated functionality means that once faces are assembled the grain is unidirectional, increasing the monolithic perception.

Ultimately, both the computational approach in design and production became necessary conditions to obtain the expected result. 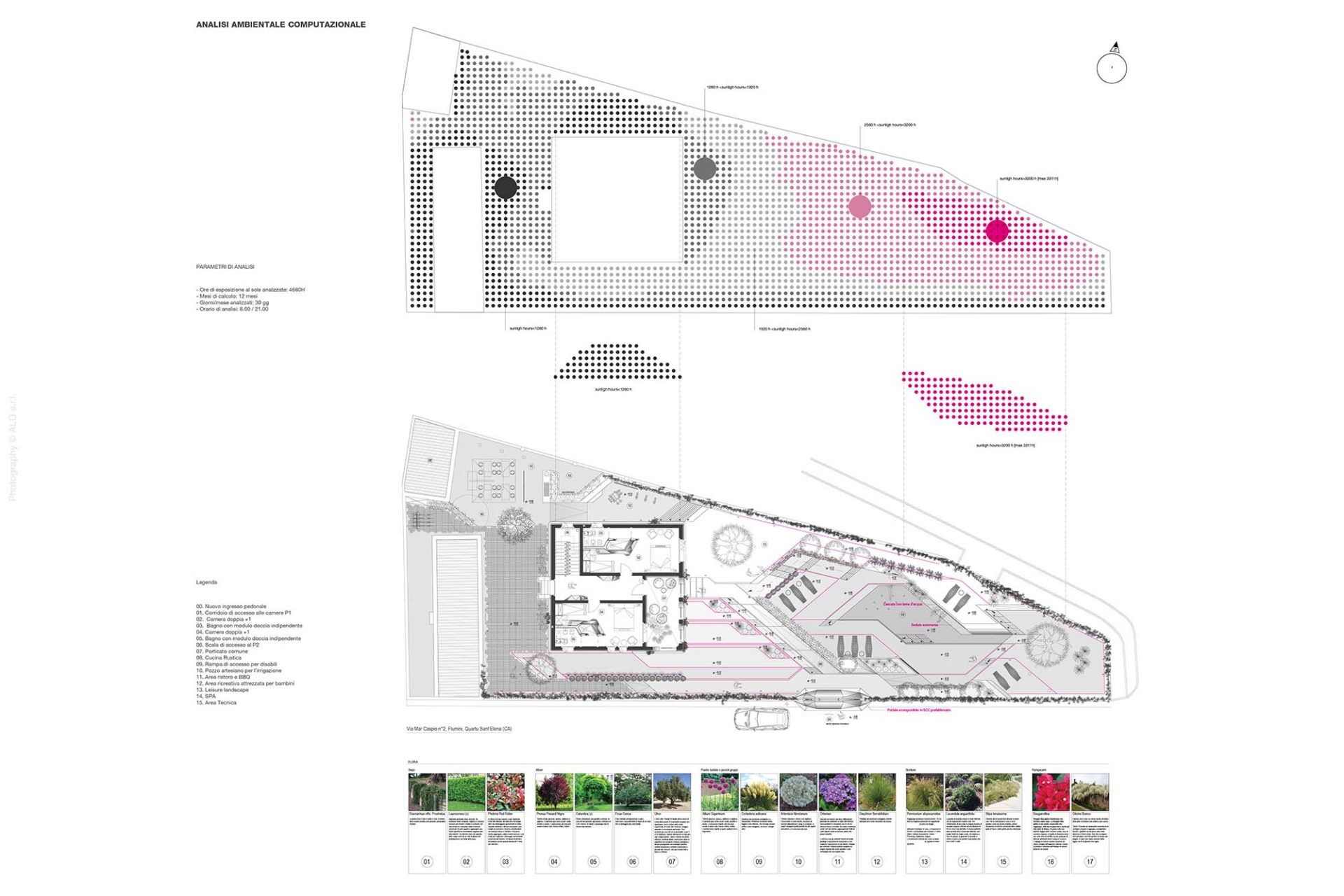 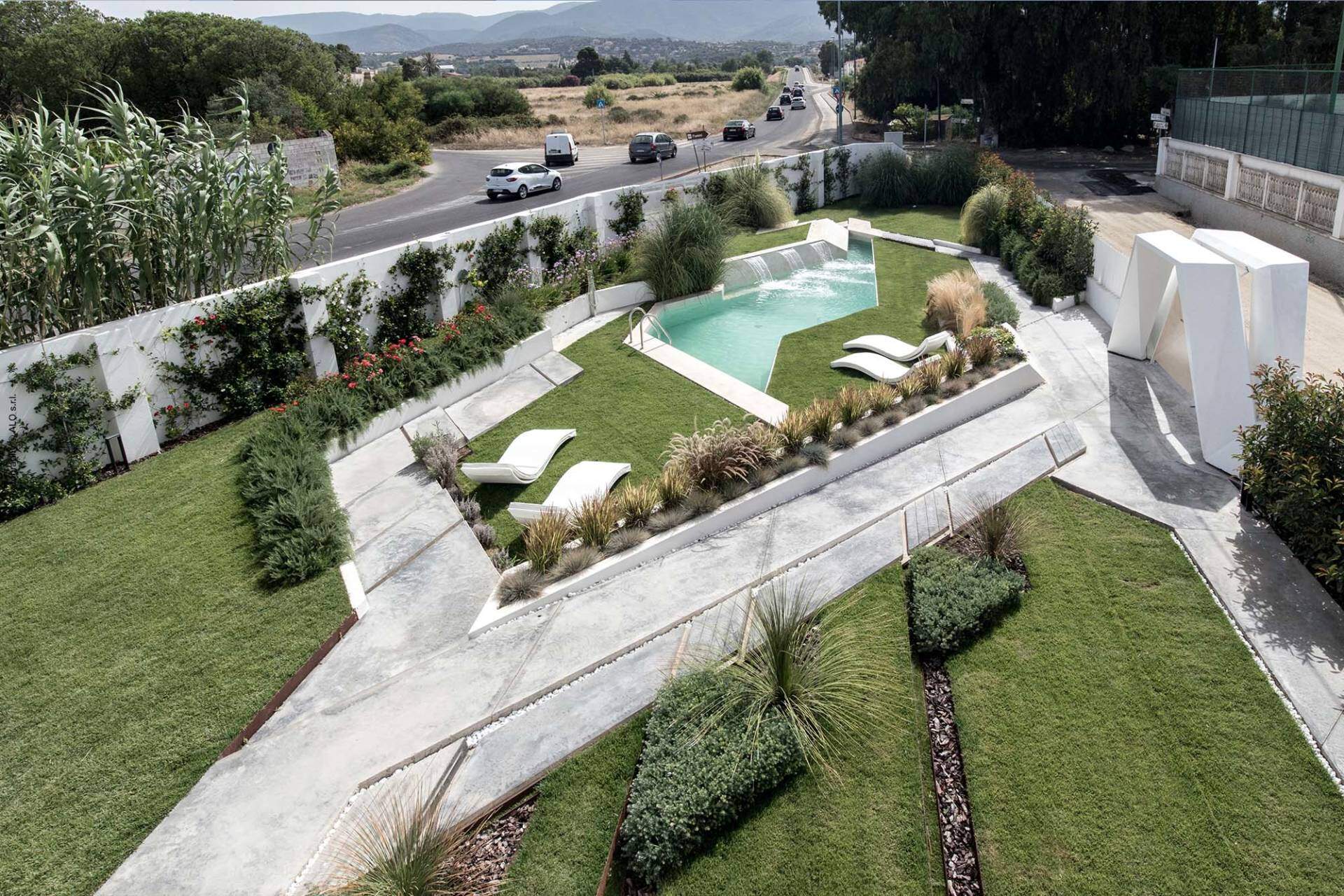 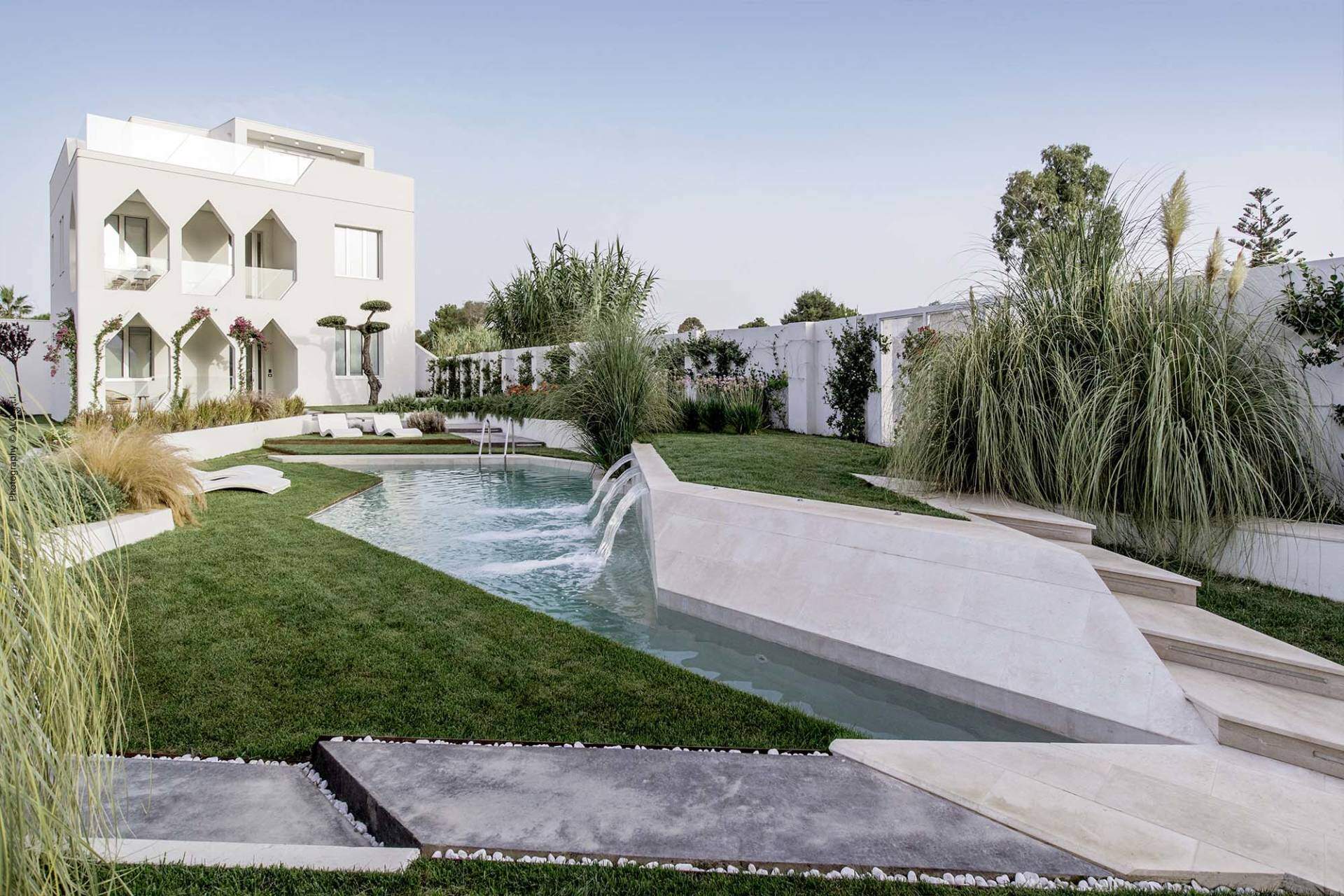 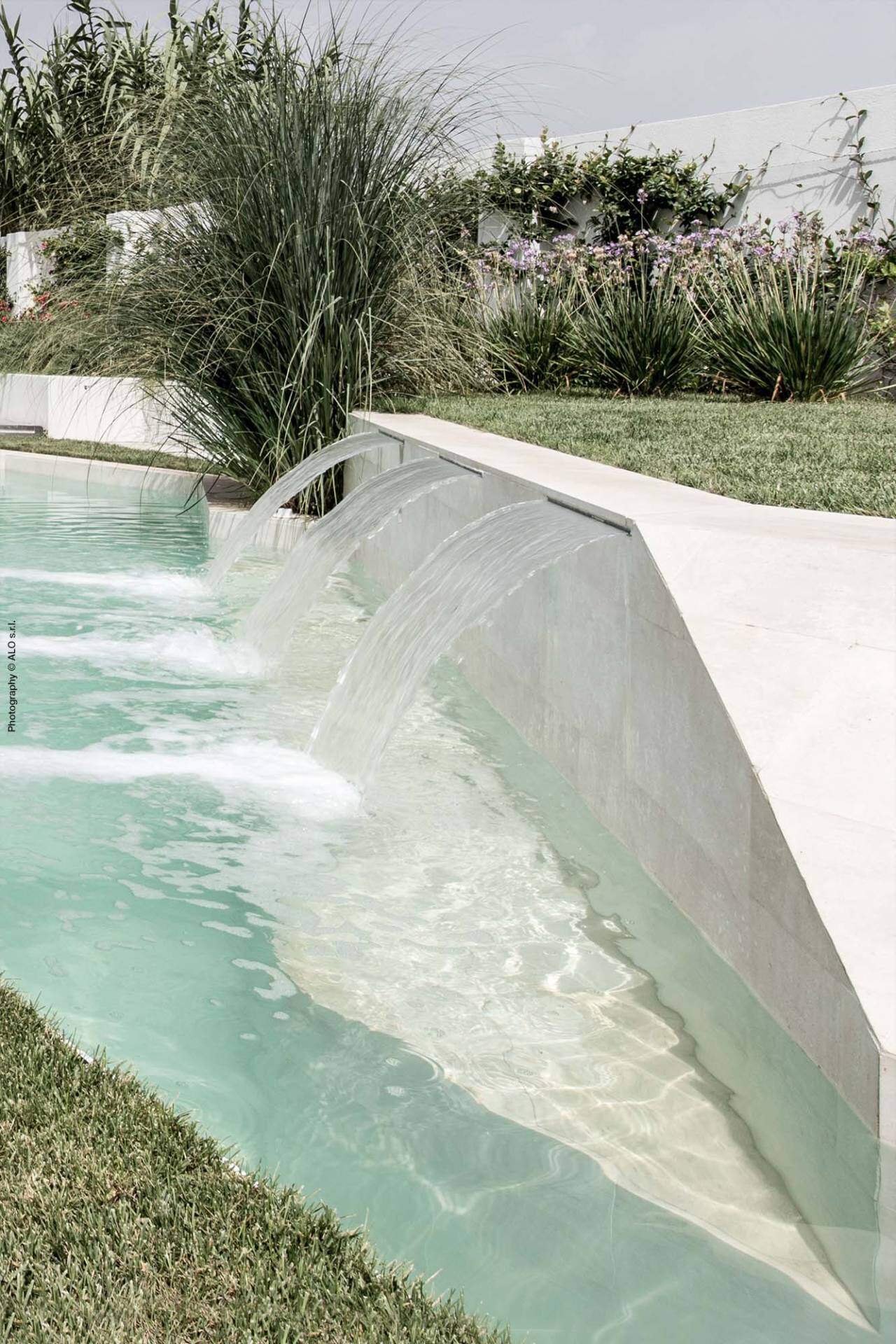 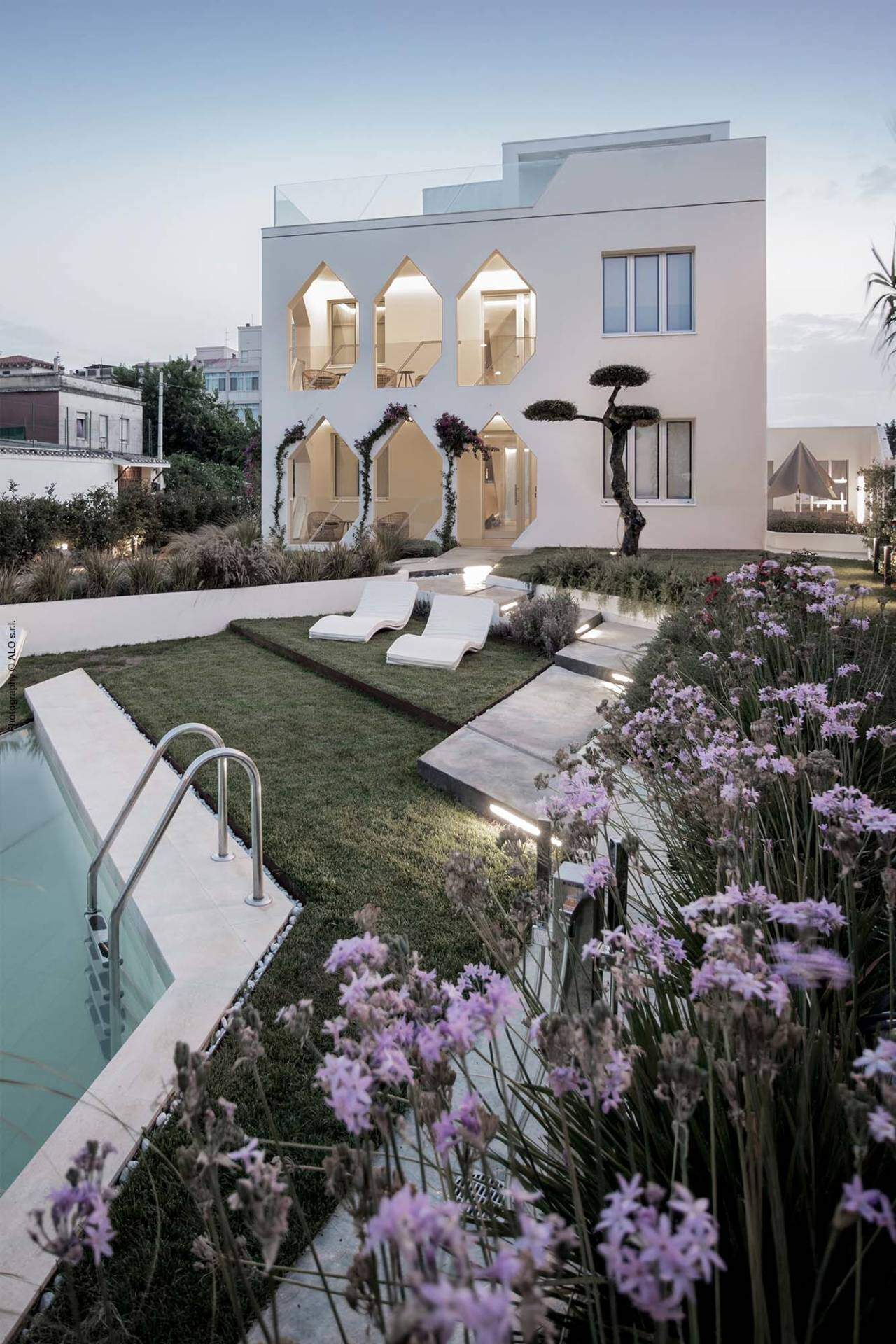 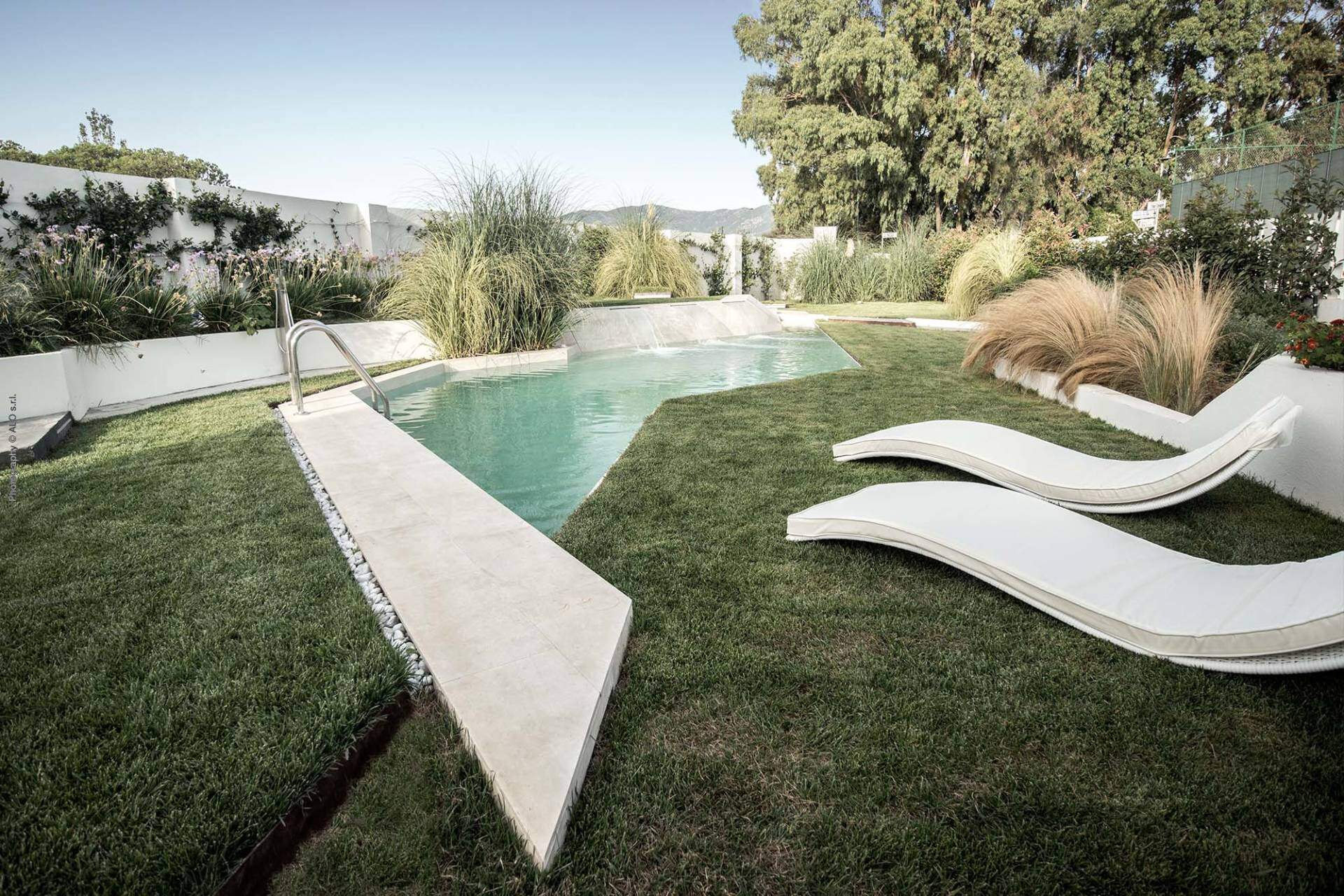 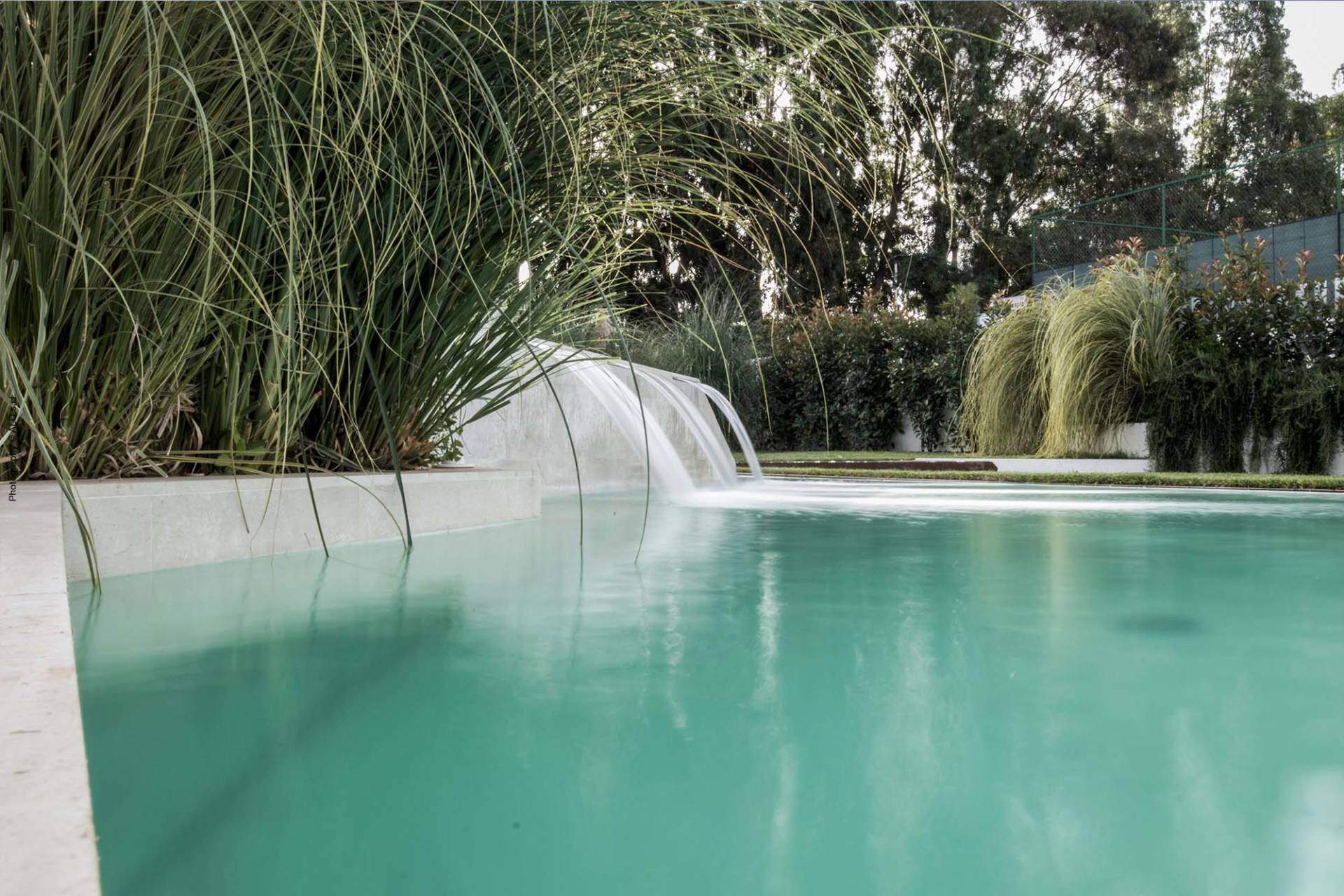 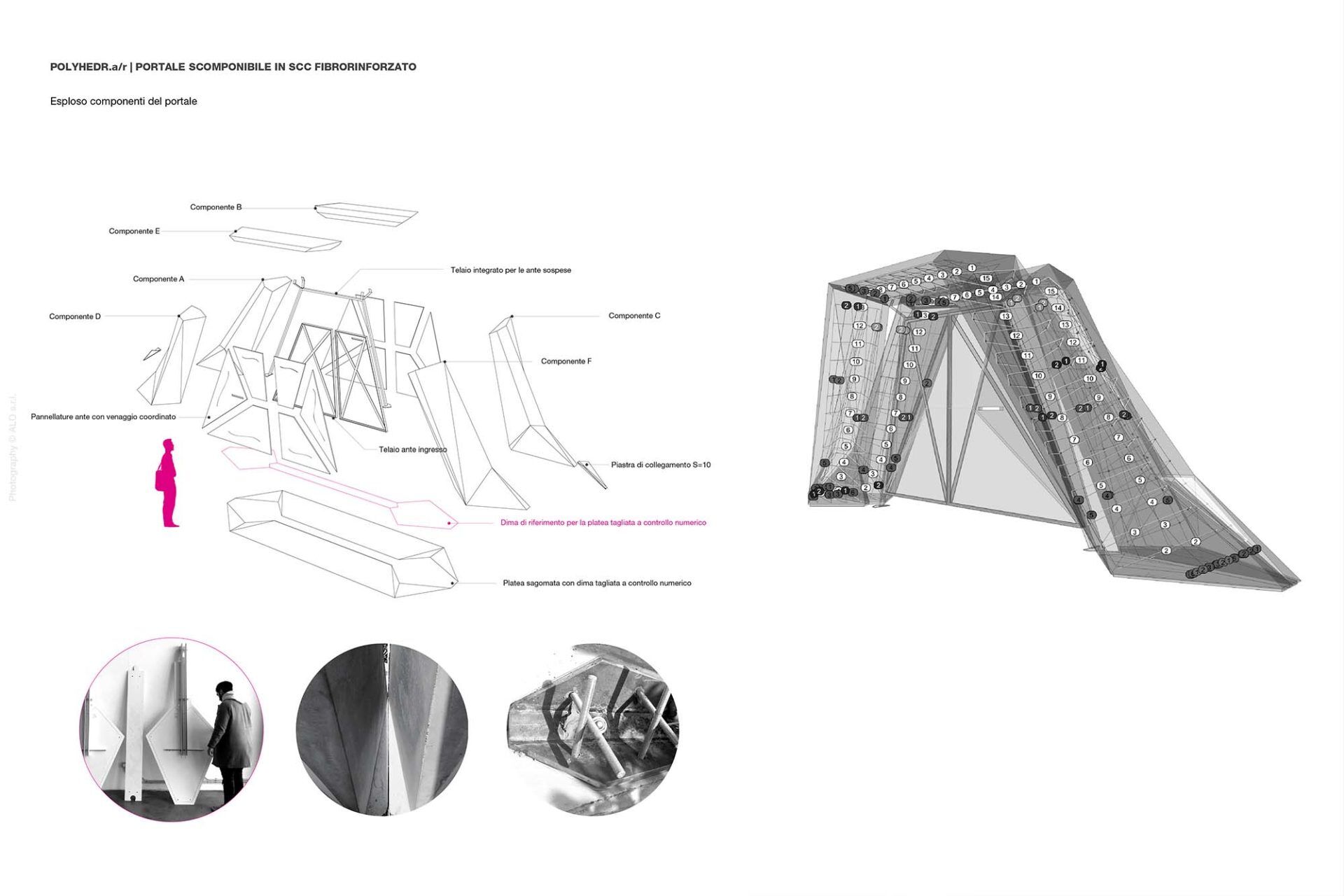 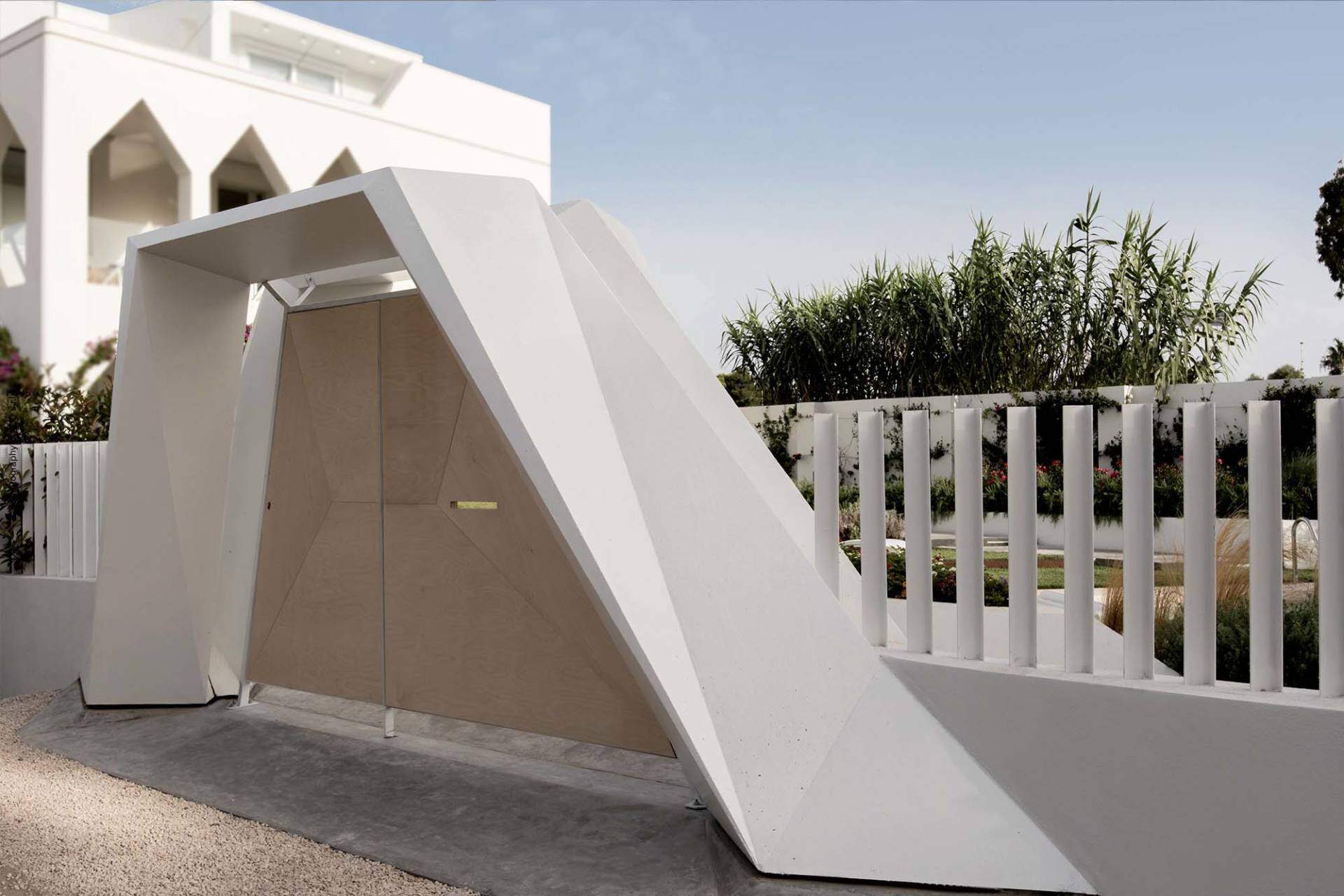 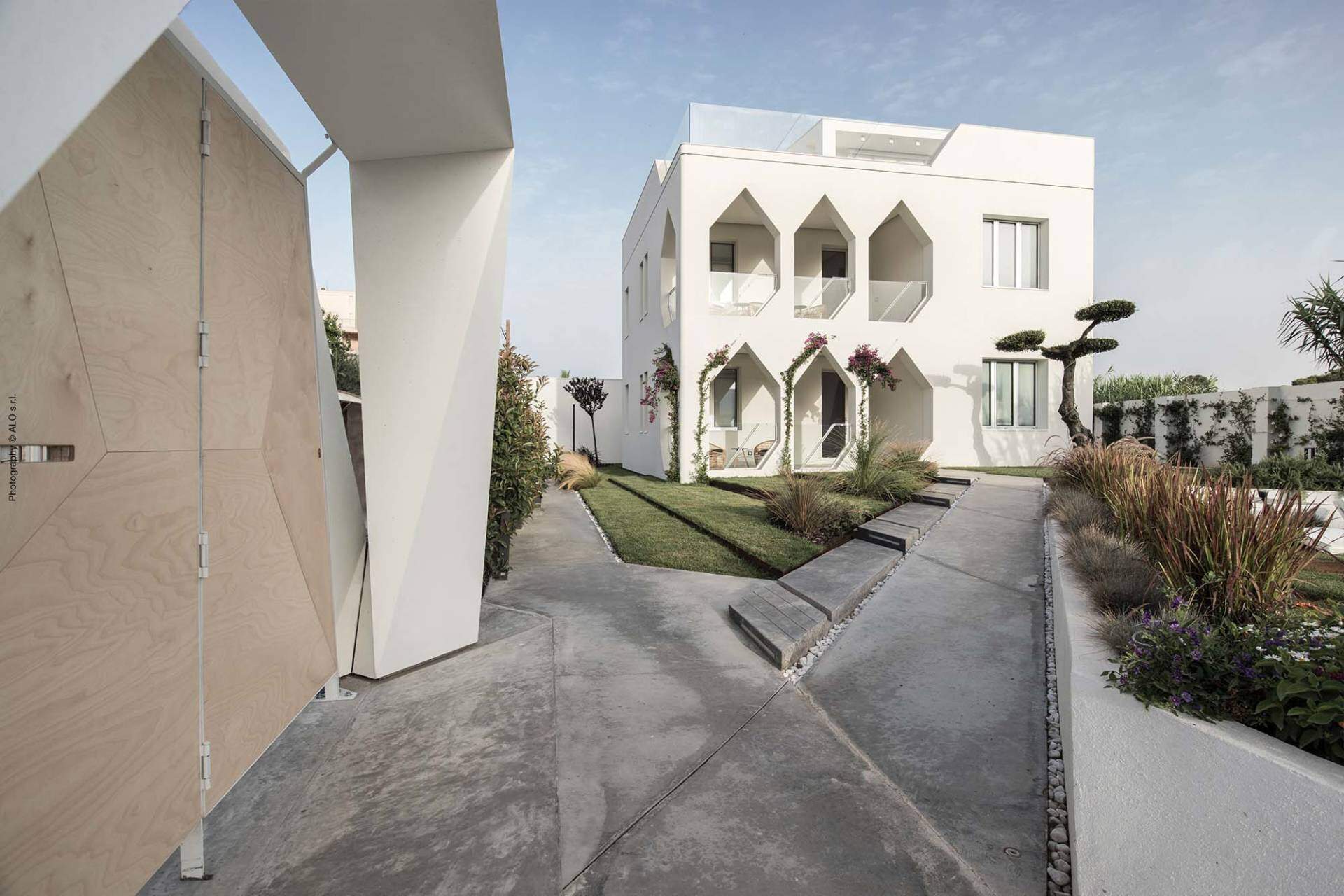 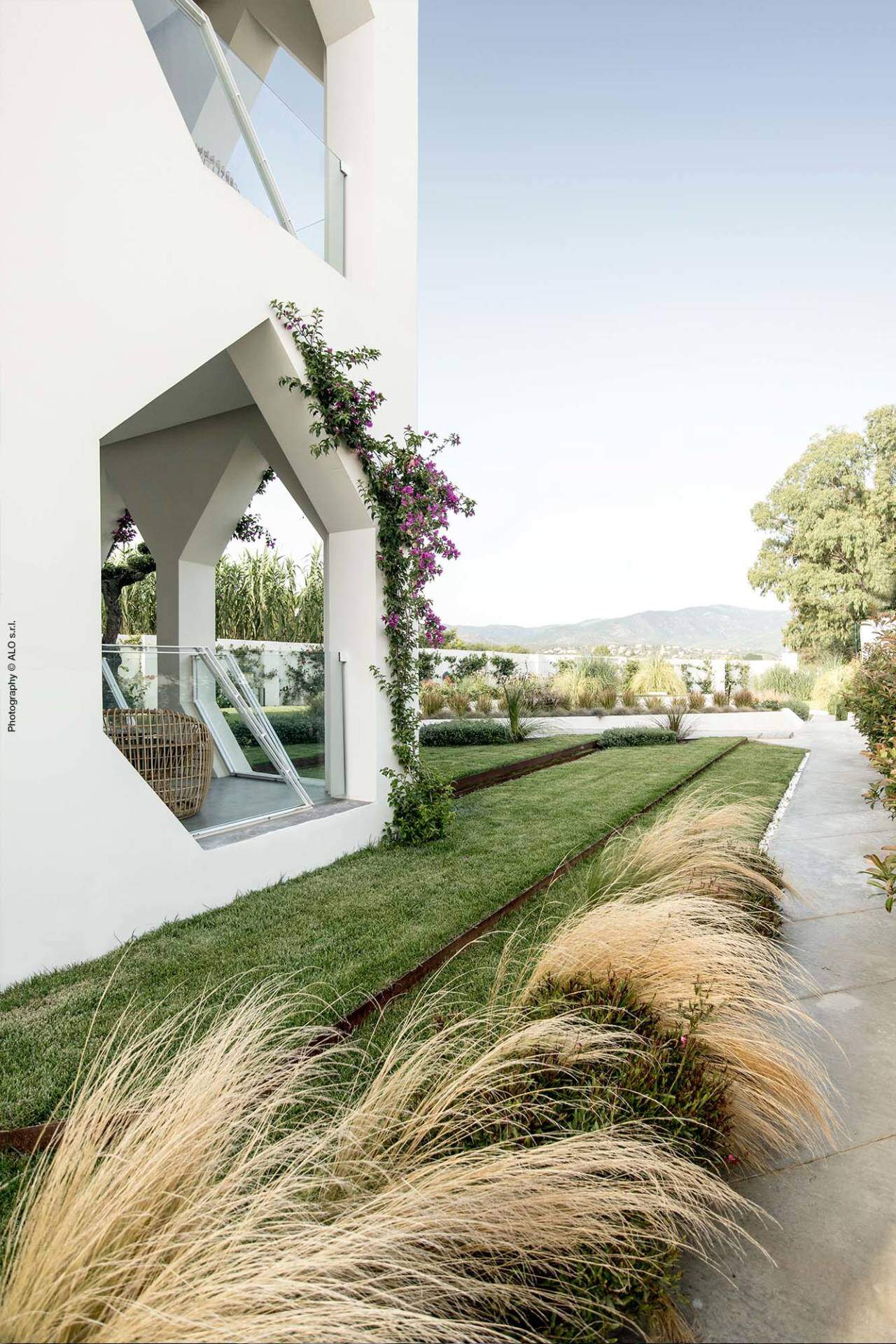 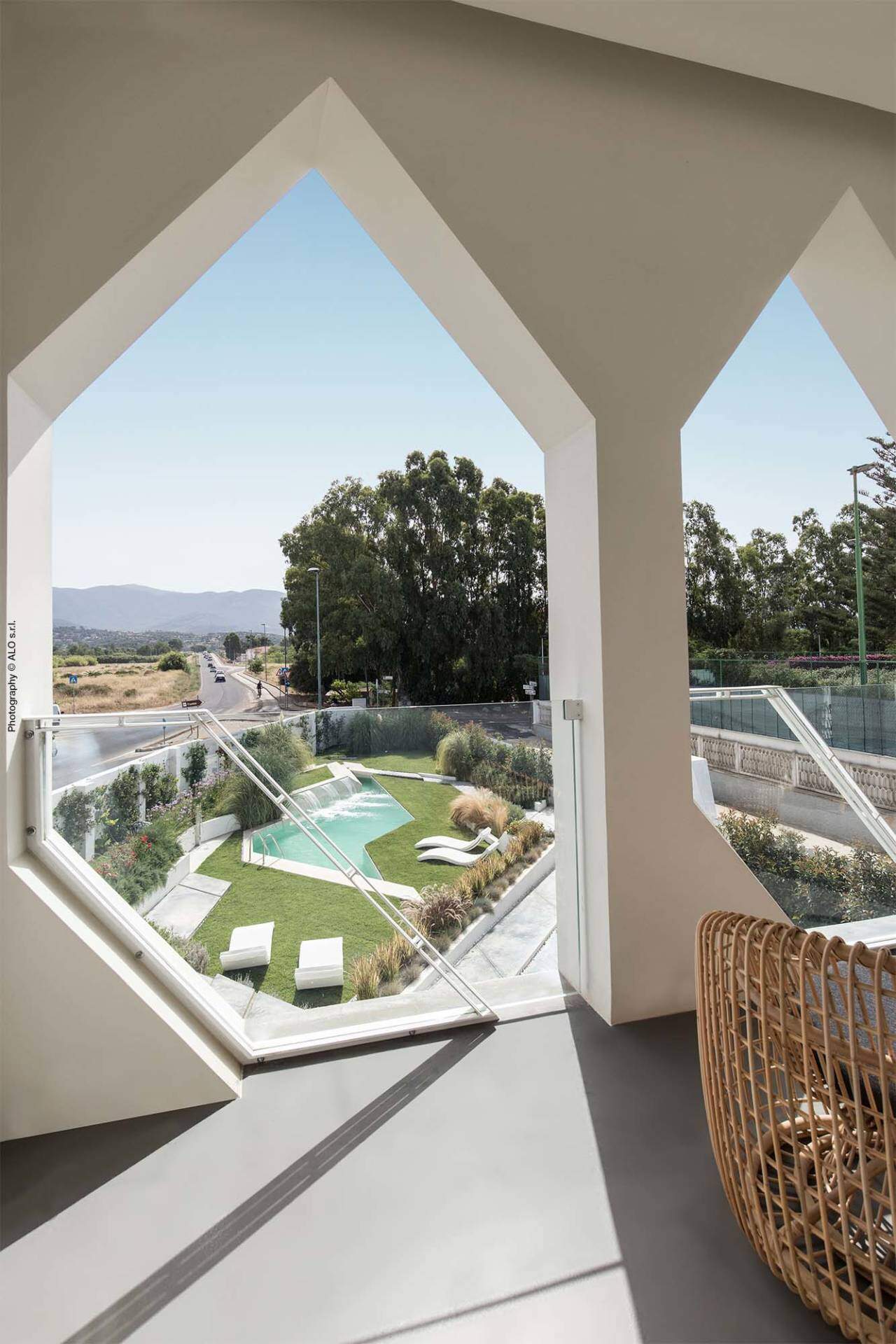 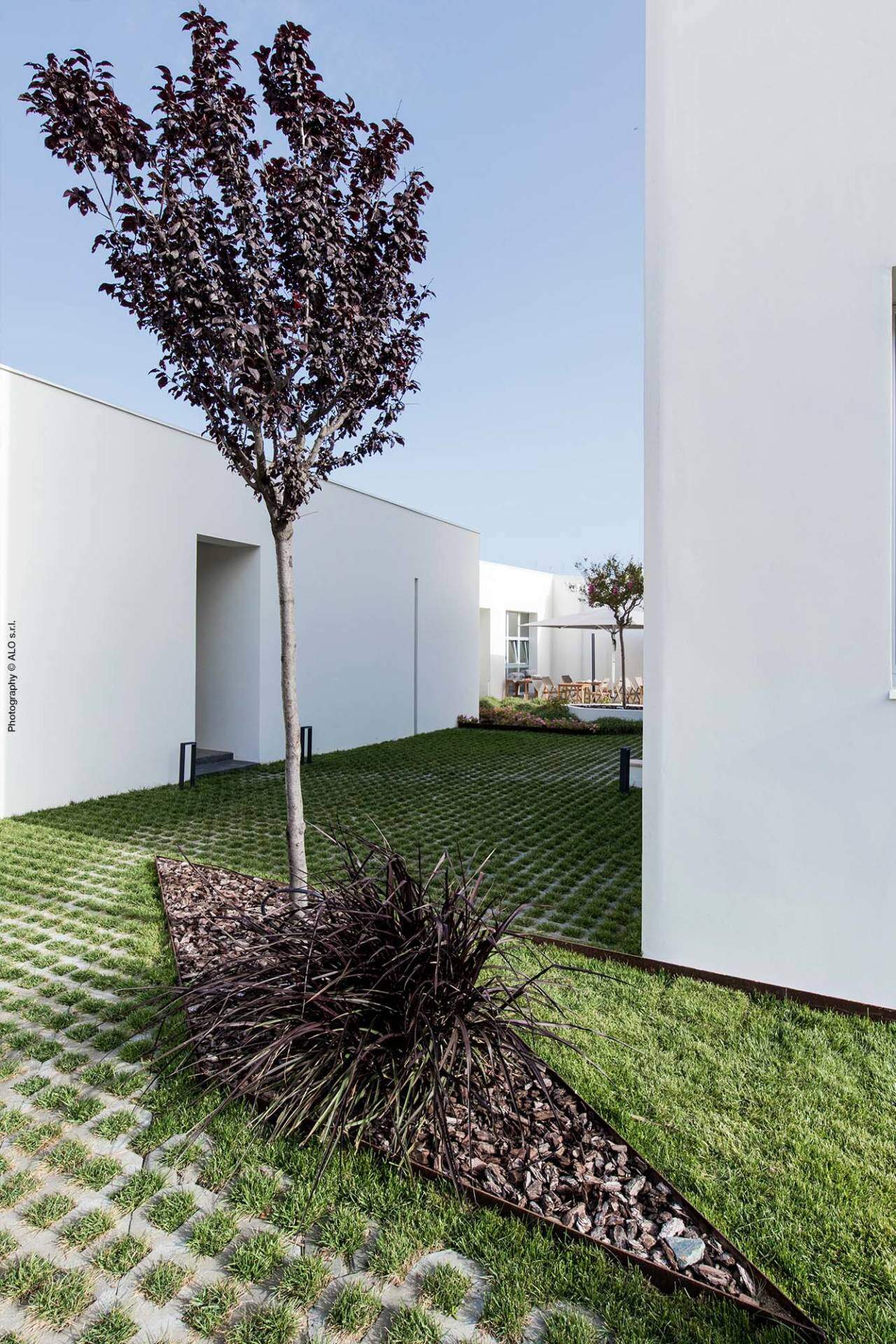 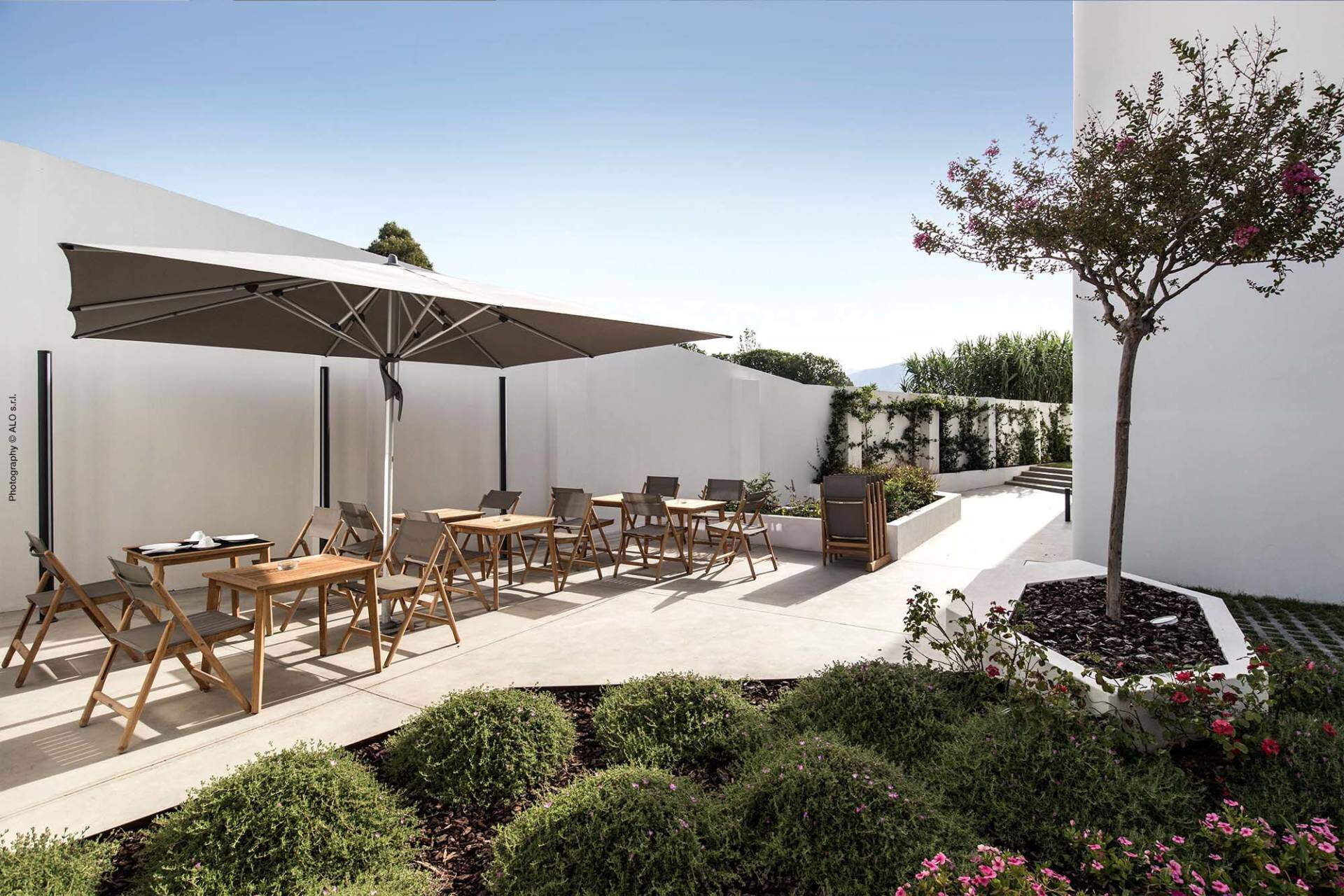 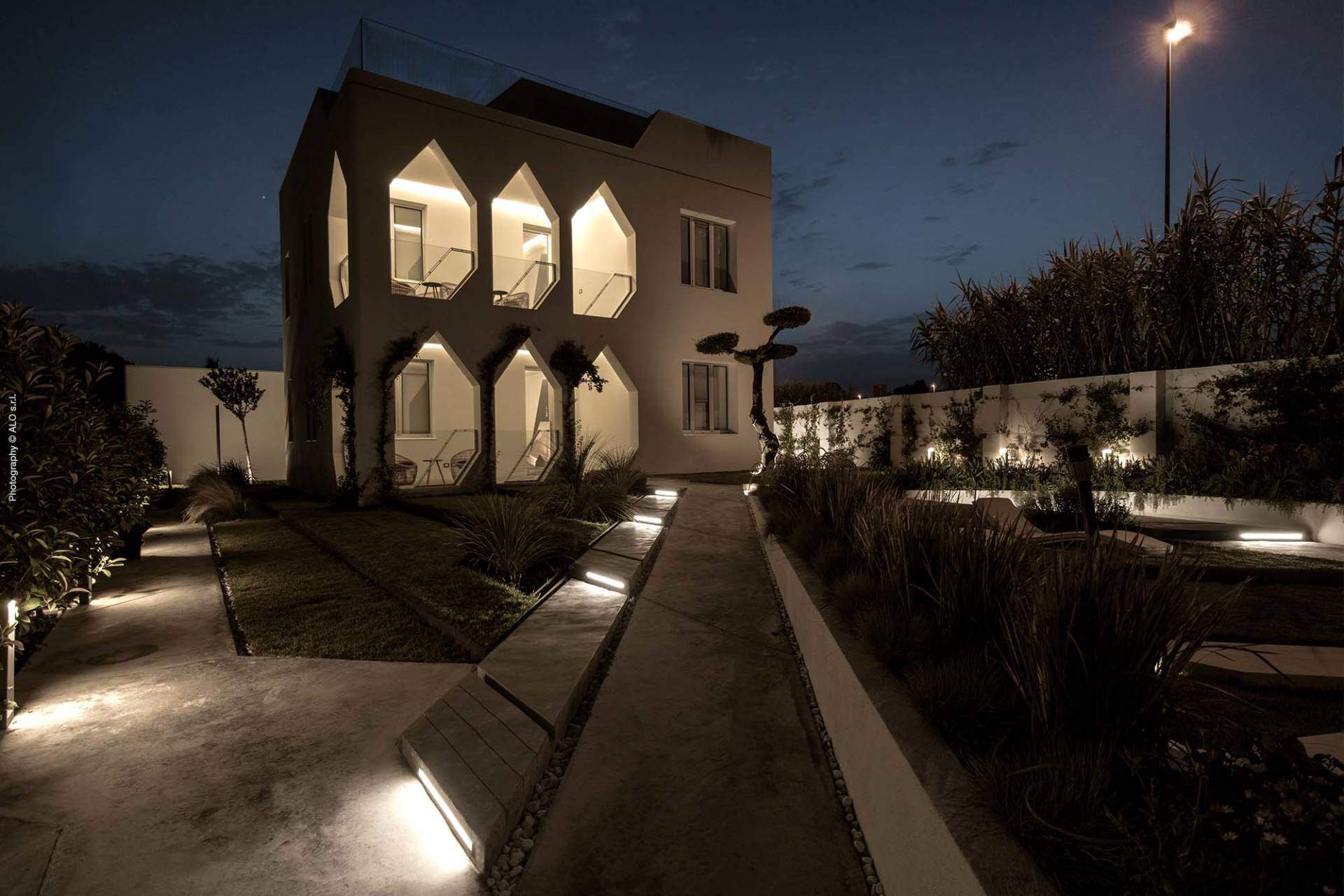 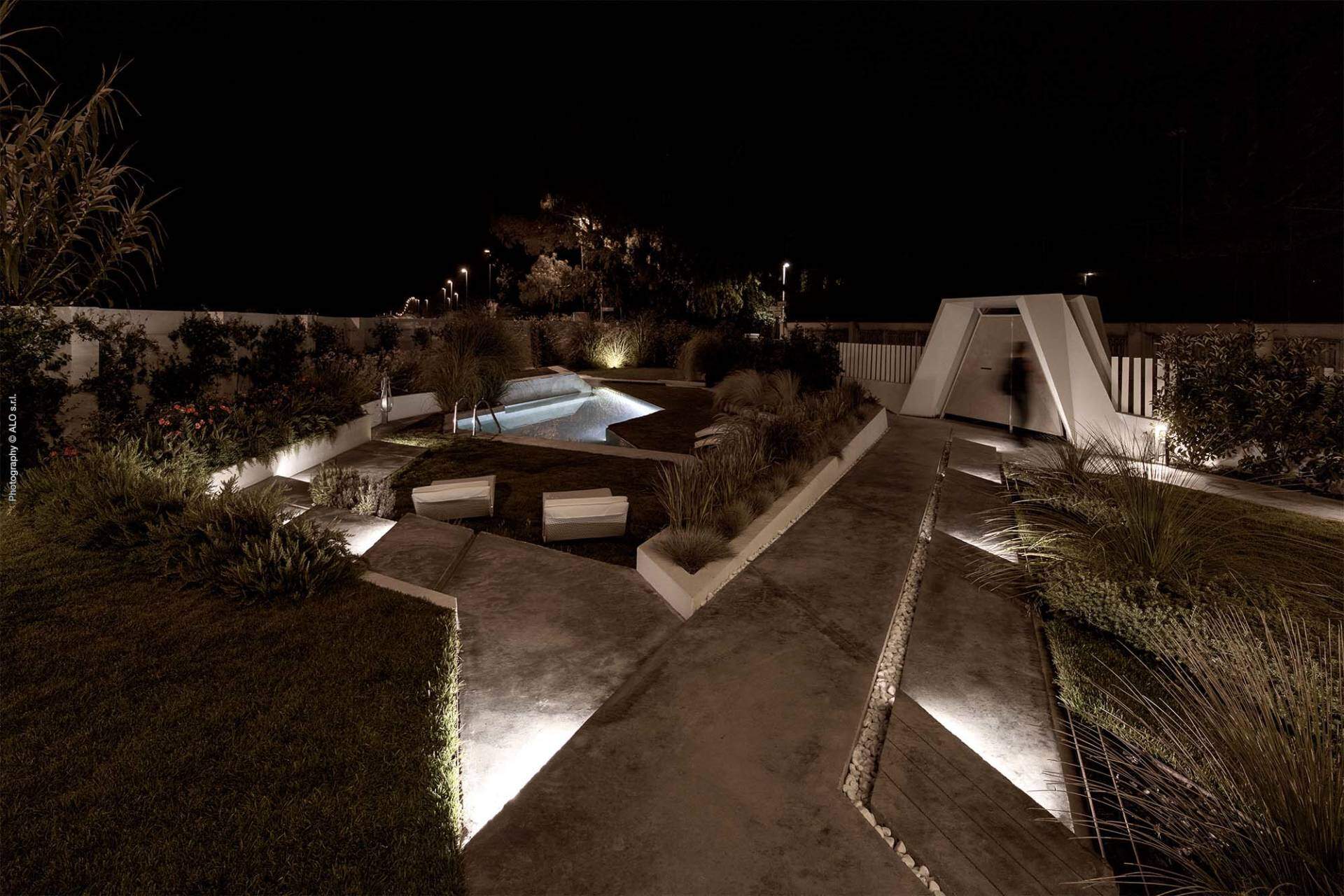 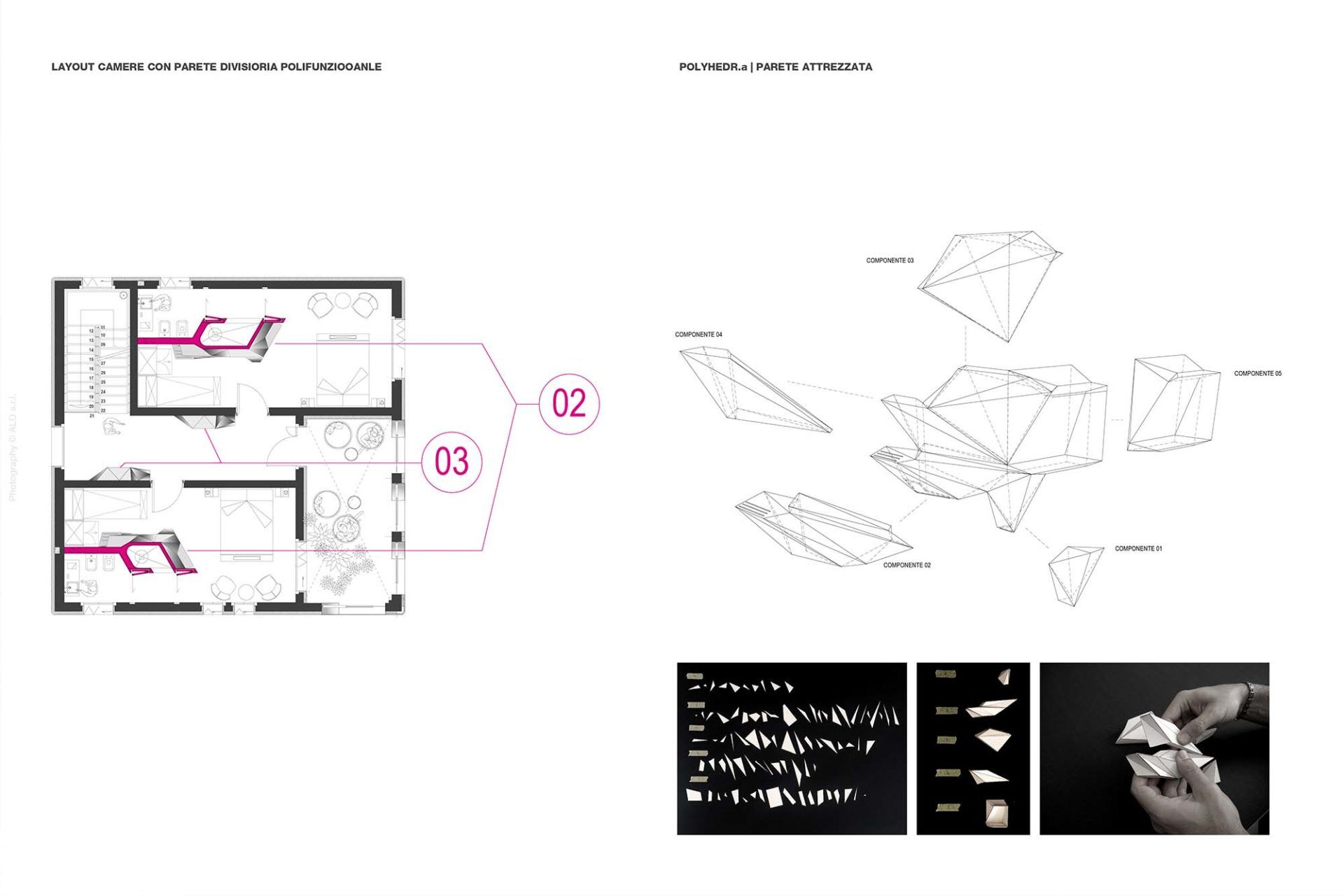 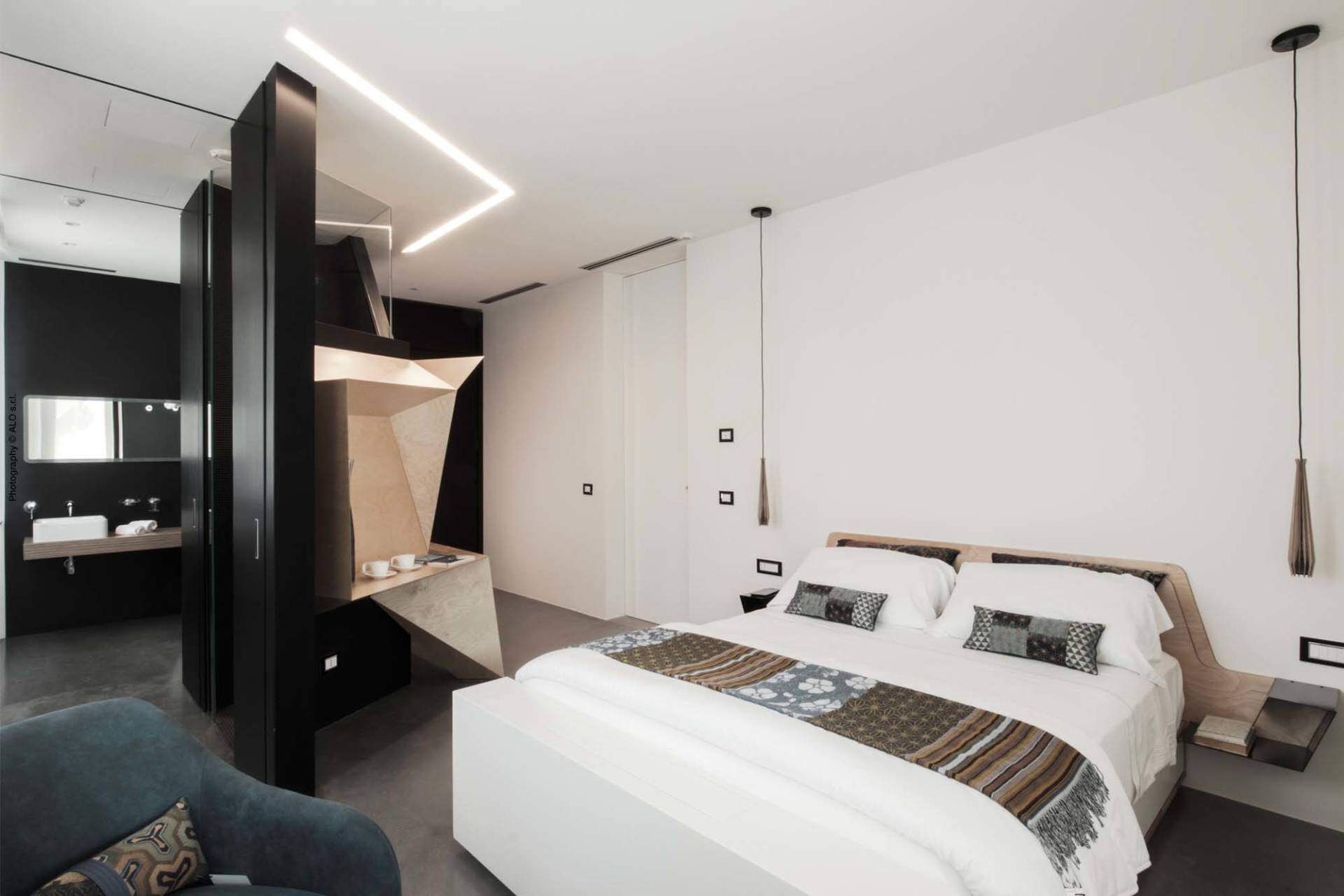 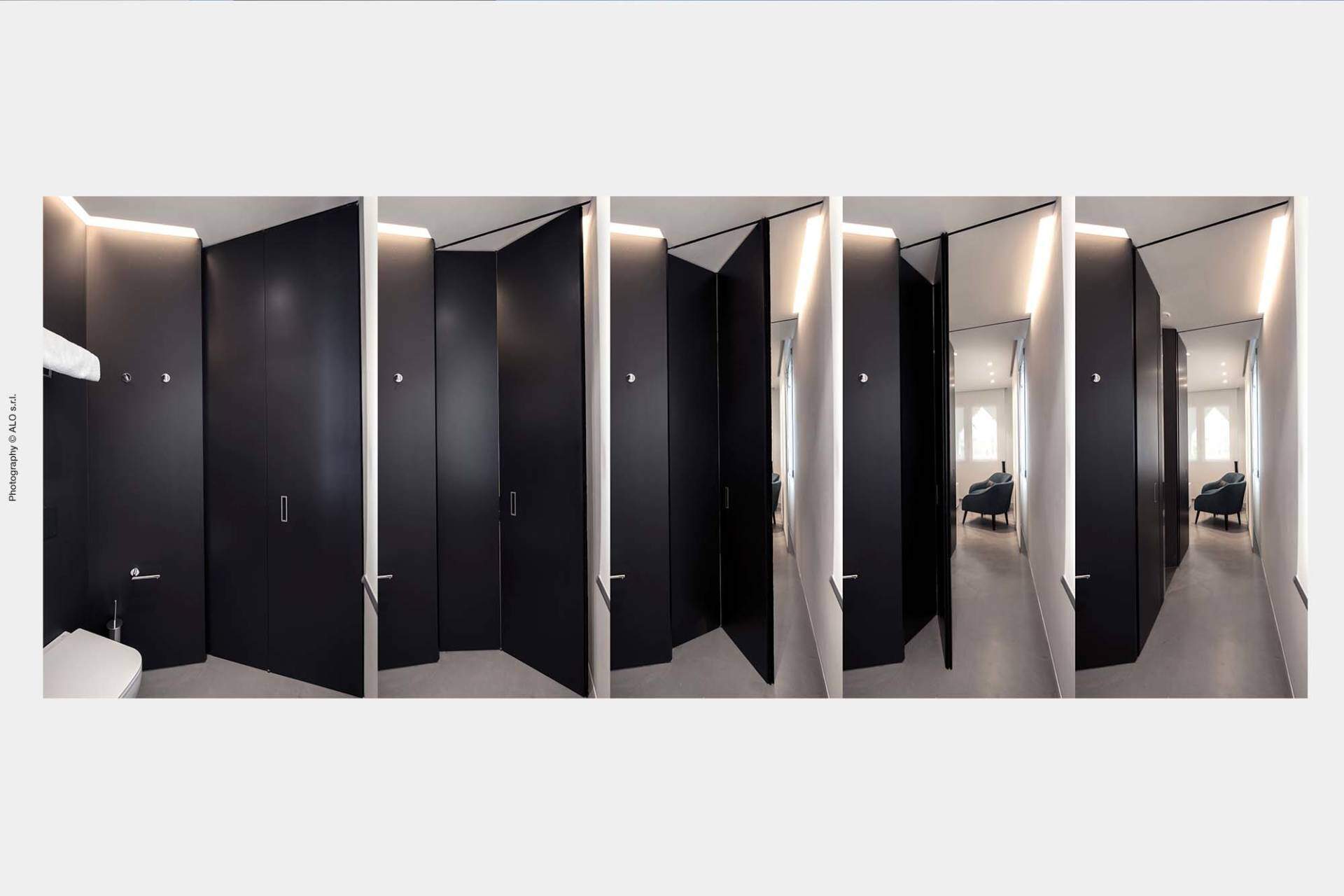 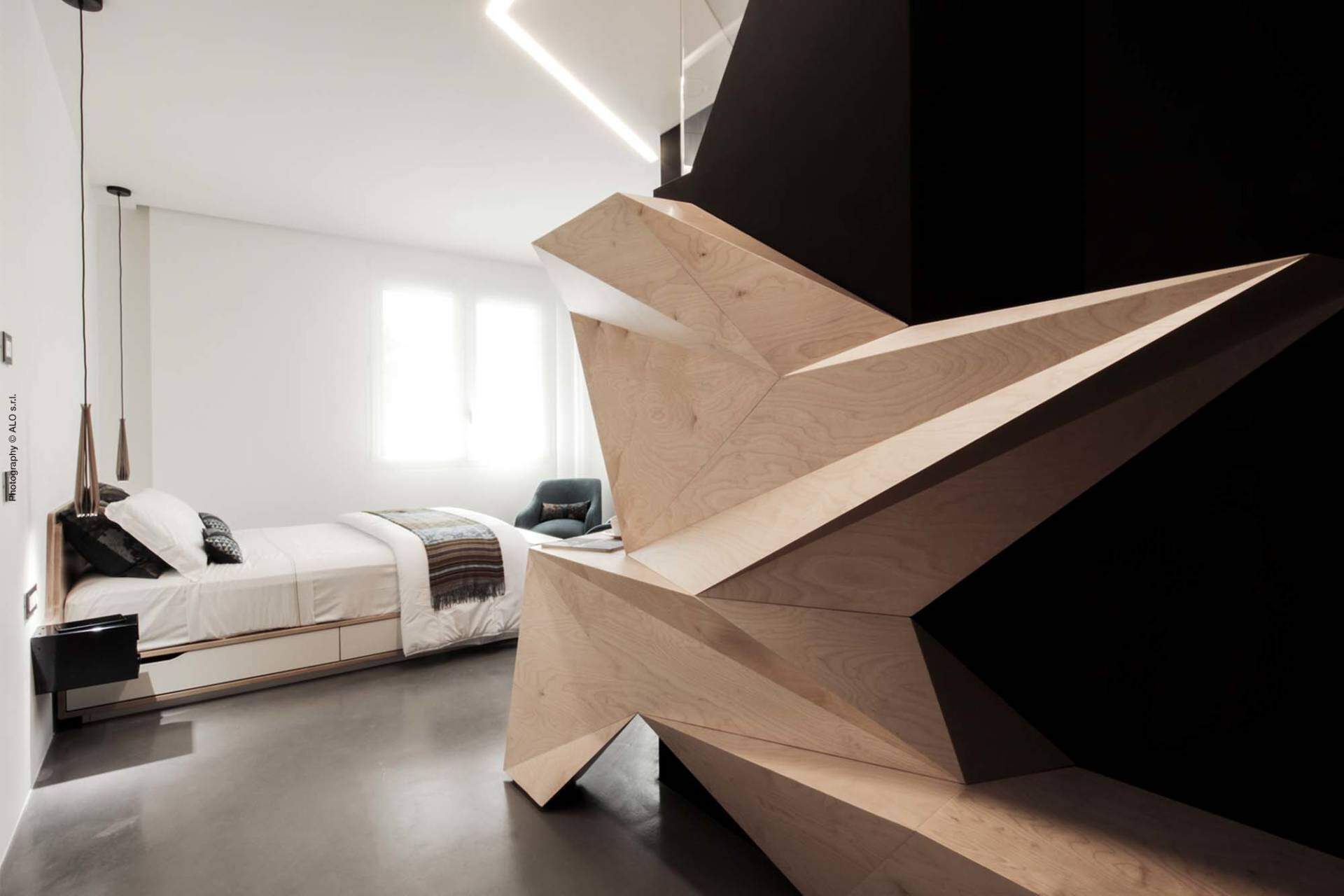 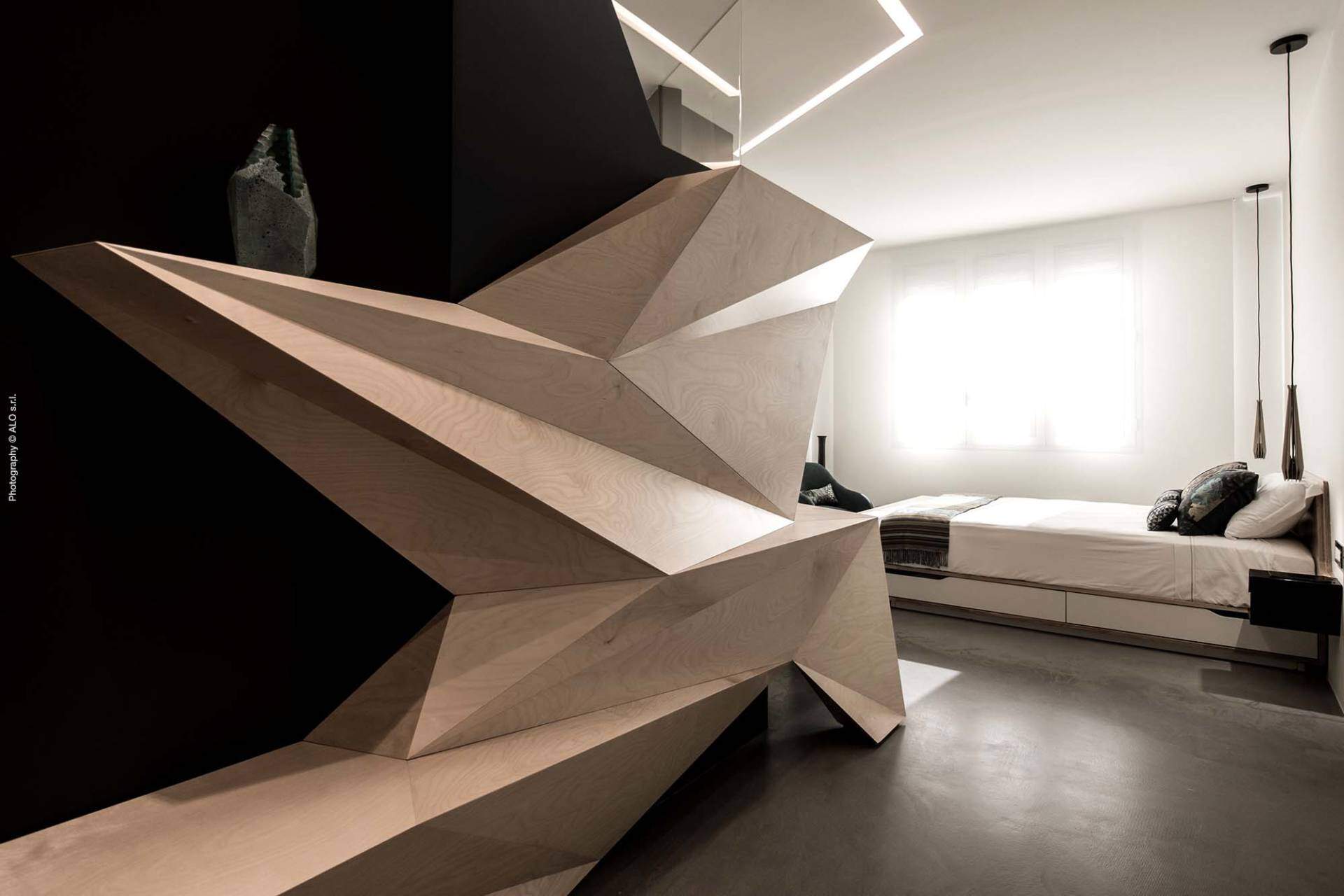 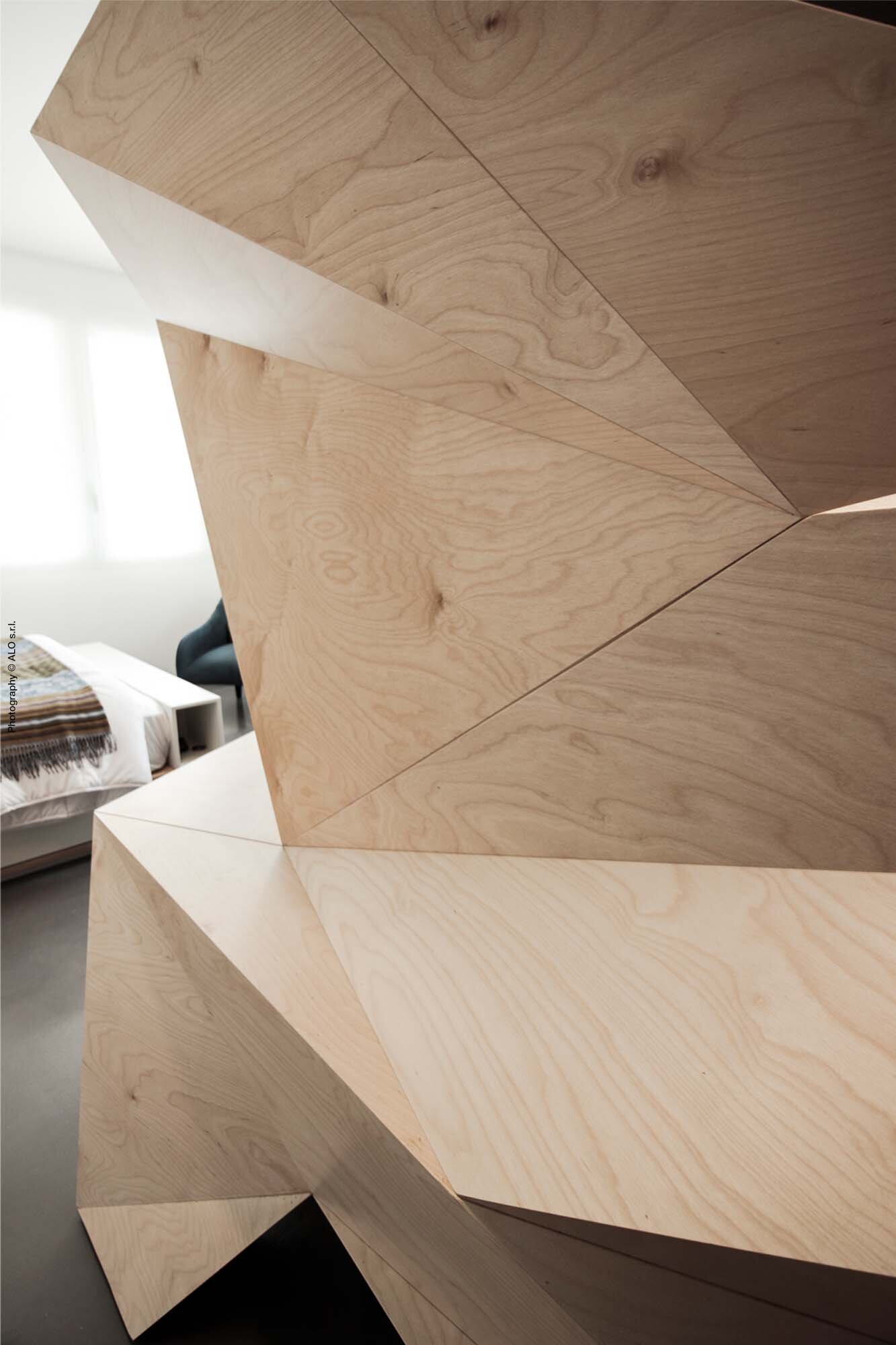 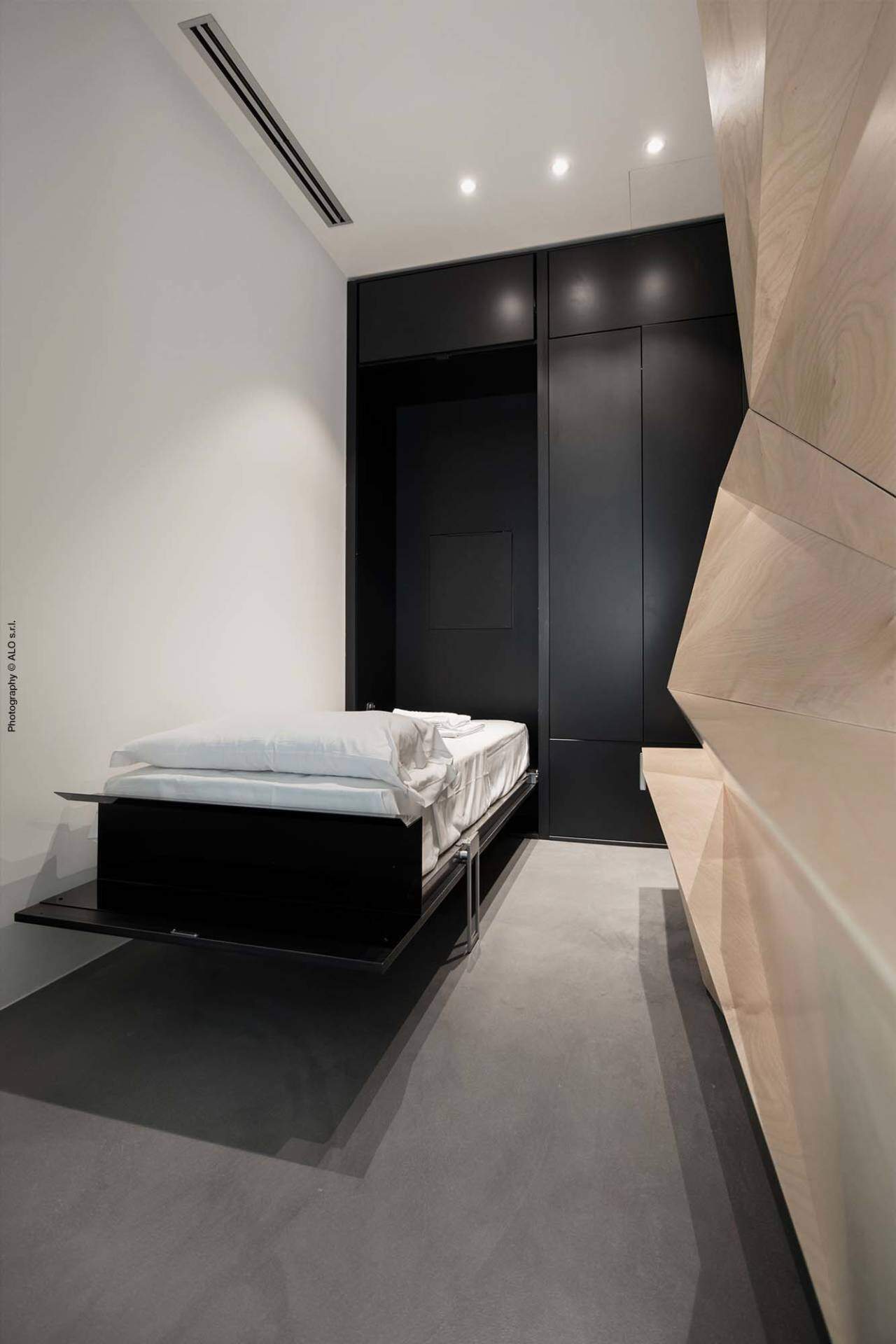 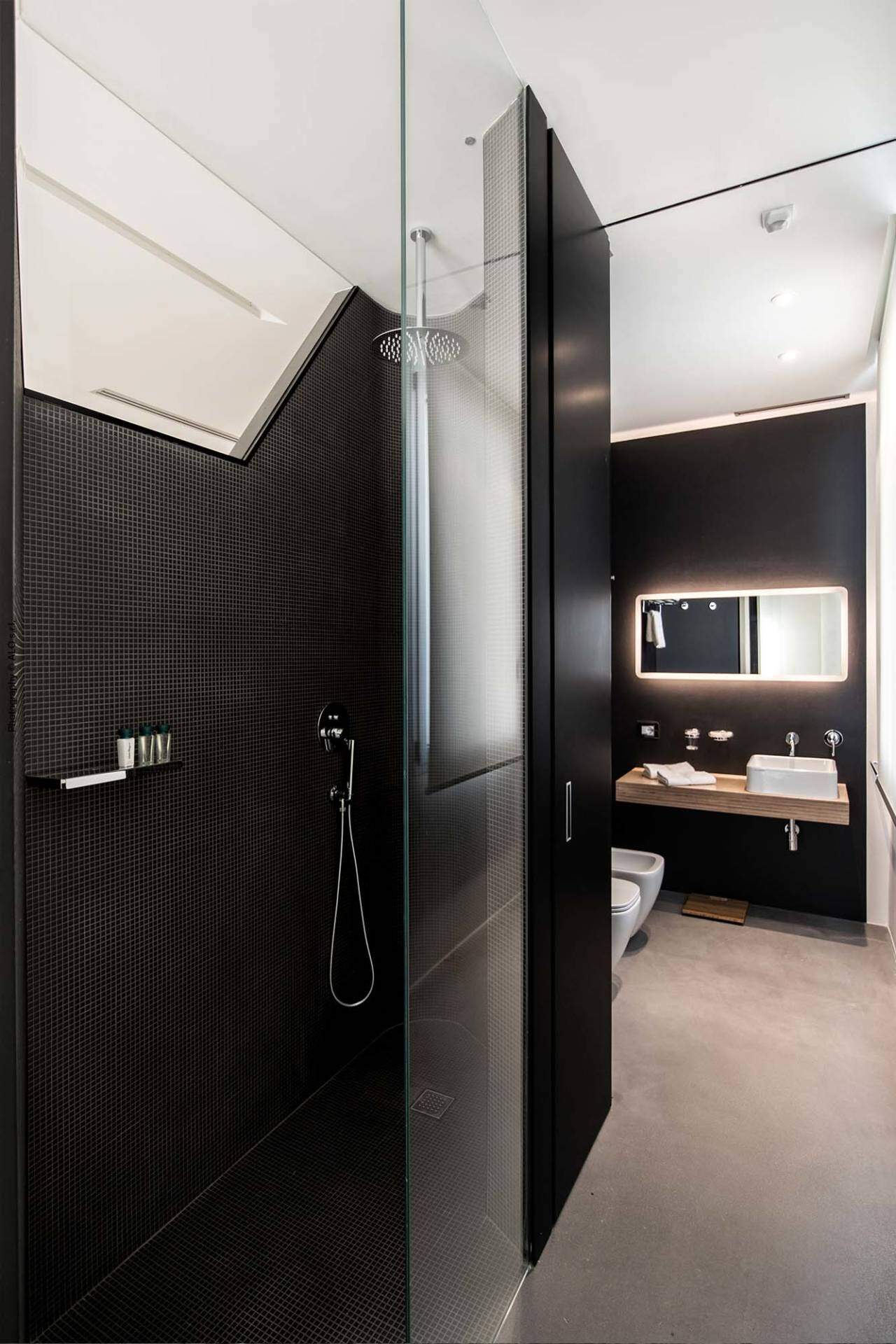 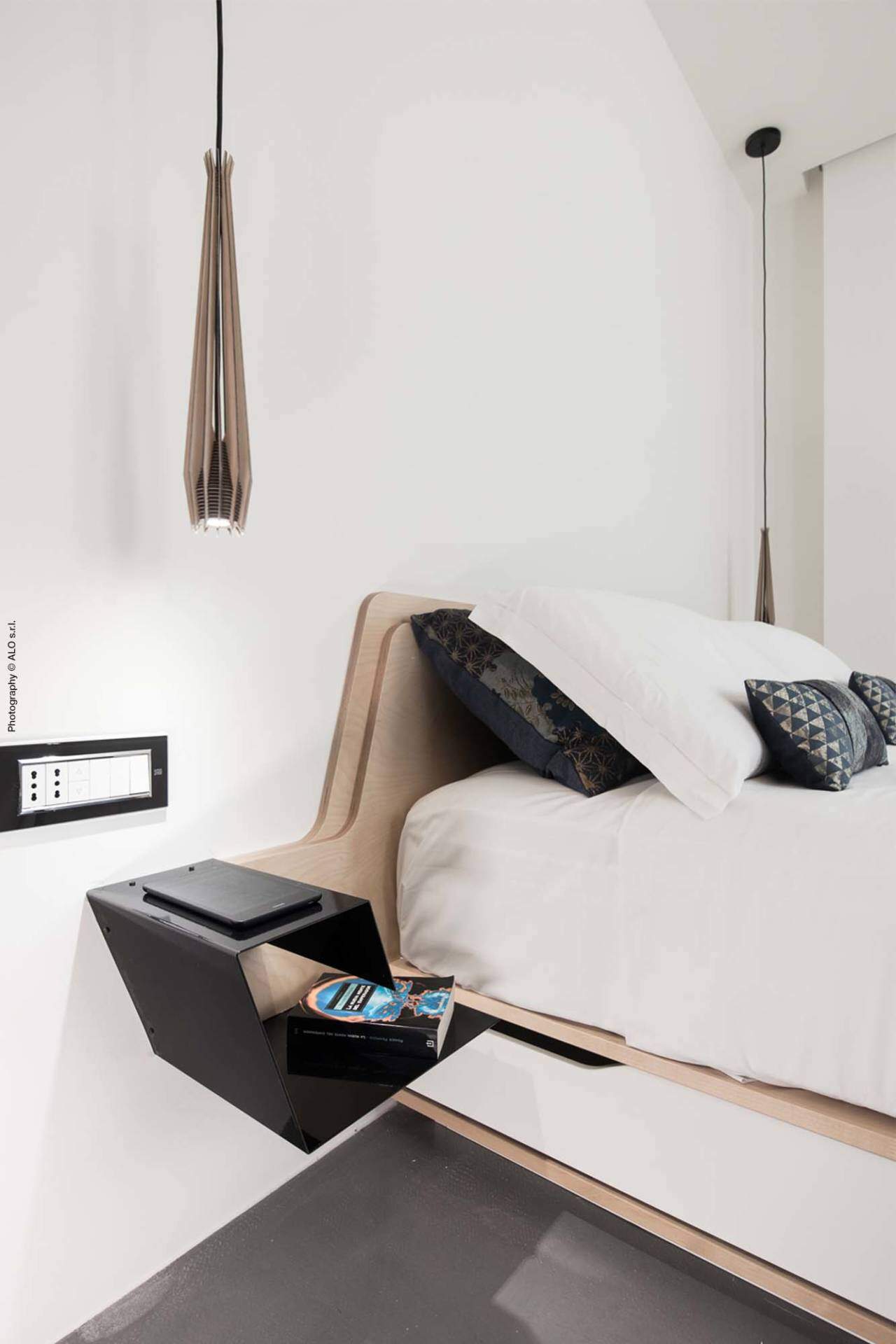 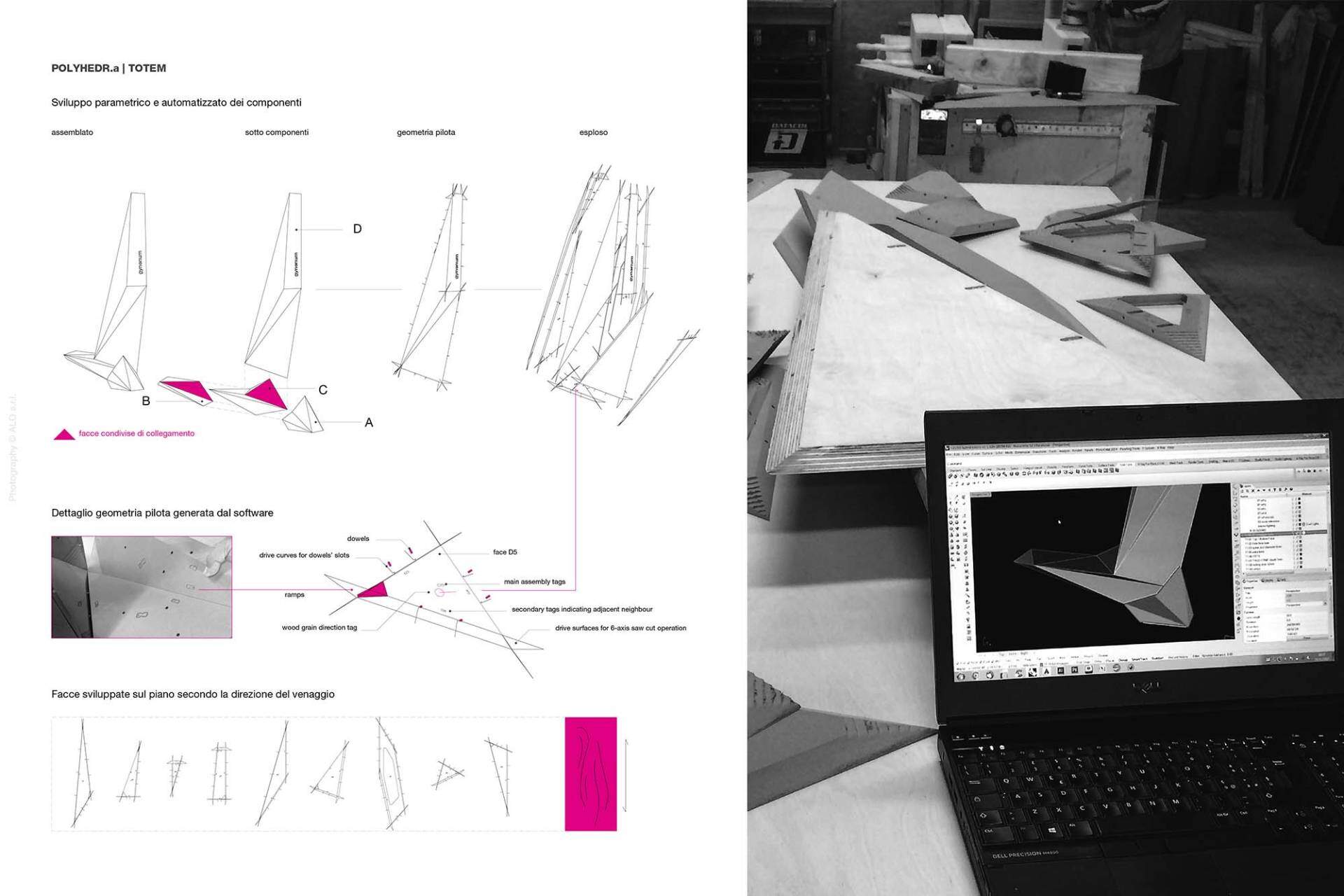 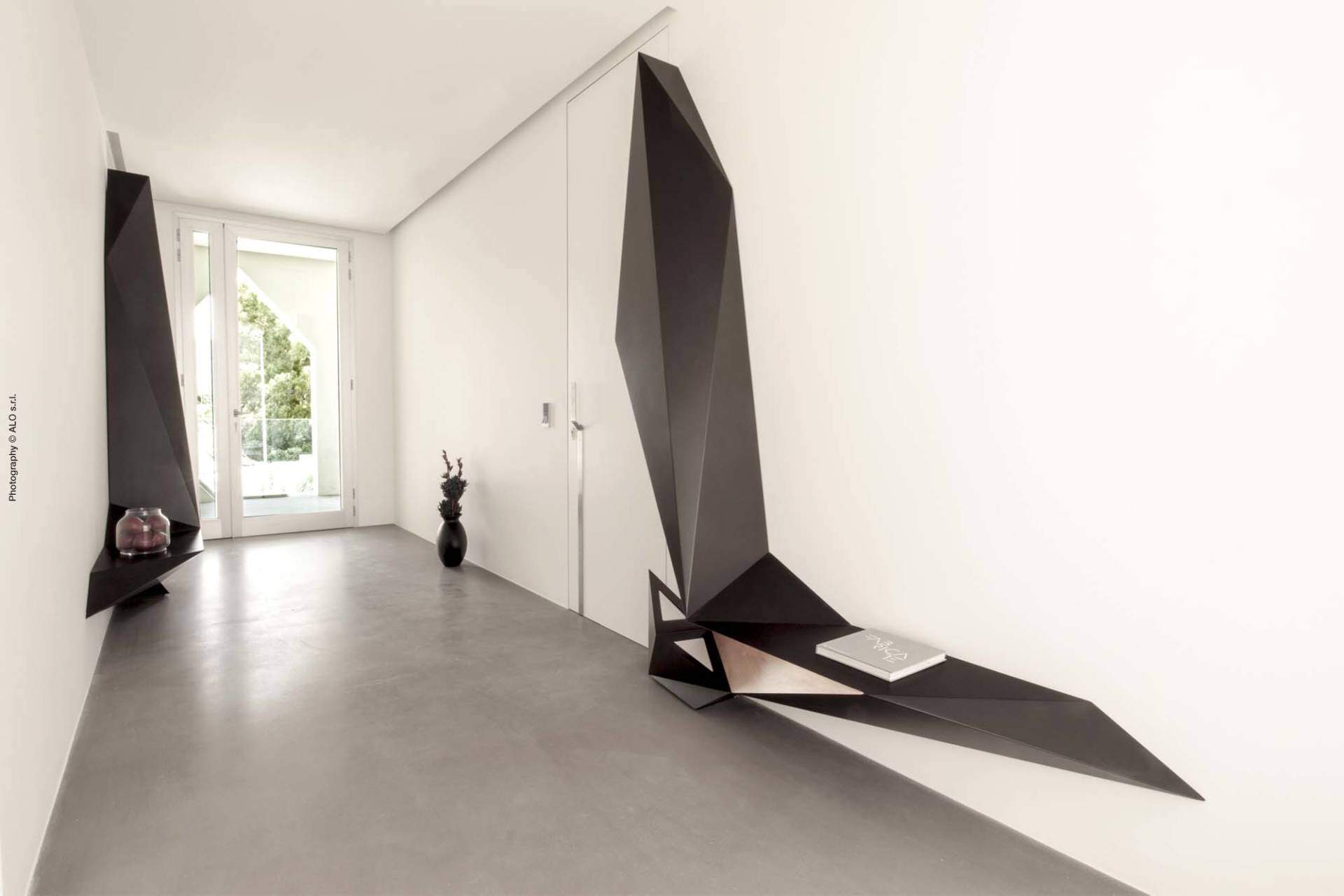 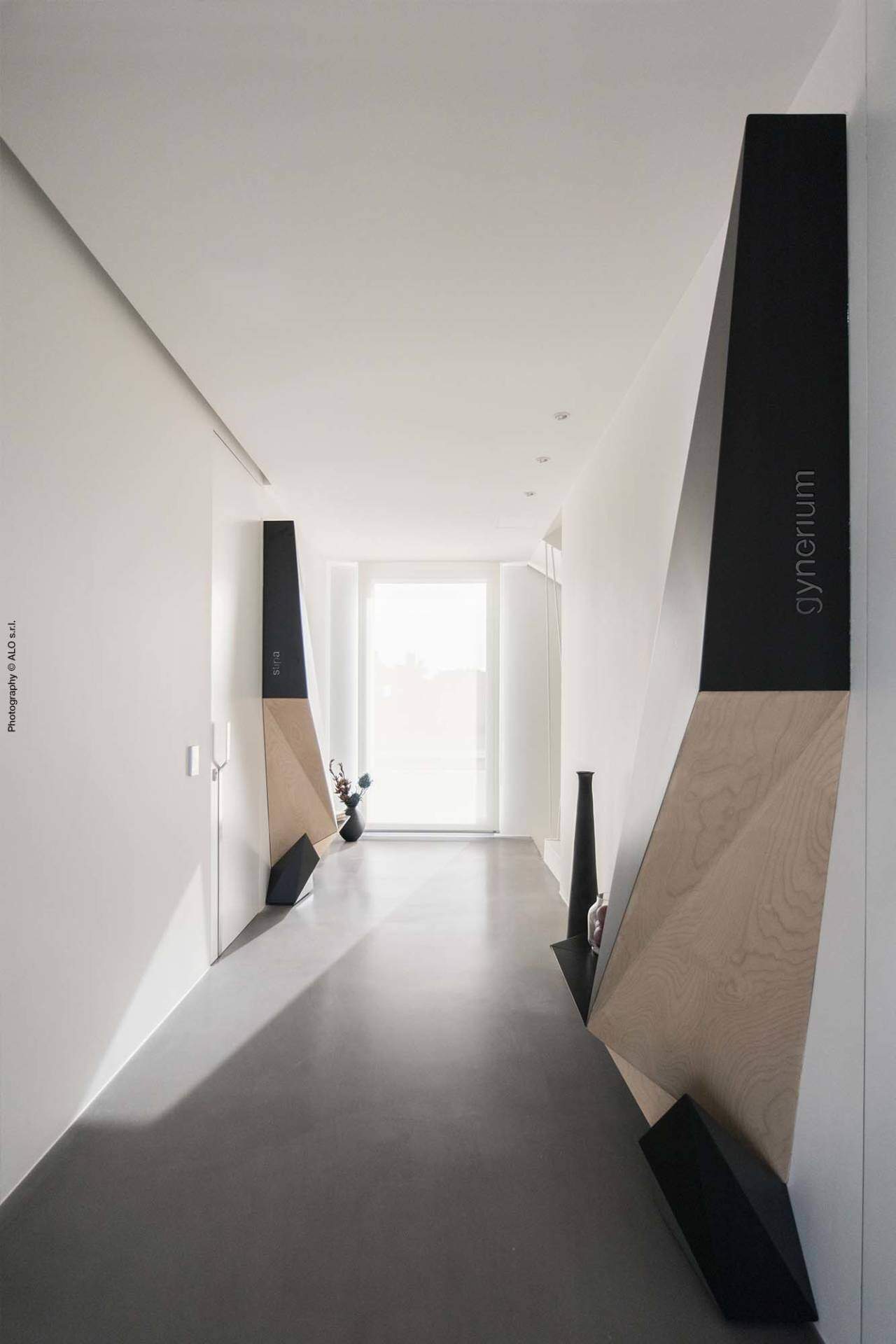 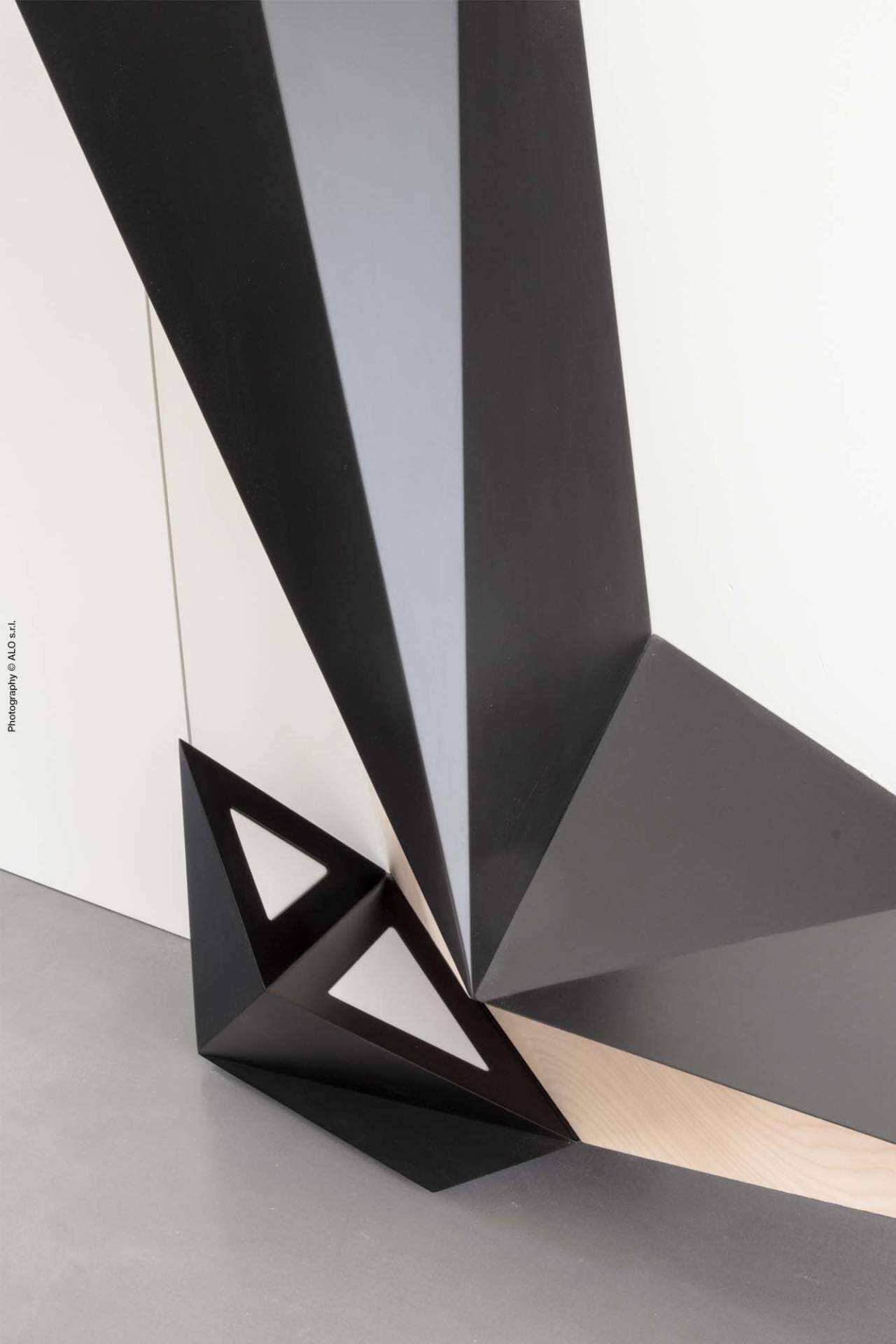